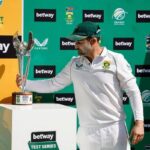 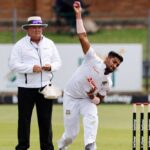 The last One Day International of the three-match series between South Africa and Bangladesh will be played at the SuperSport Park in Centurion on March 23, Wednesday. The third ODI promises to entertain the viewers with an enthralling game of cricket as the series is leveled at 1-1.

The SuperSport Park offers an excellent batting wicket. Bangladesh and South Africa are expected to produce a high-scoring affair. The surface doesn’t have anything to offer to the bowlers and they will have to put in great efforts to make a difference in the game. The team winning the toss should opt to bat second.

Mostly Sunny weather conditions are forecasted for the third ODI between South Africa and Bangladesh. The temperature will be around 24 degrees Celsius while the humidity and wind speed will be 51 percent and 14 km/h. The precipitation chances for Wednesday are negligible.

South Africa and Bangladesh are expected to put their best foot forward on Wednesday to win the series. The first One Day International between the two sides was won by Bangladesh by 38 runs while South Africa made a comeback in the second game to score a win by seven wickets.

Opting to bat first, Bangladesh delivered an underwhelming performance with the bat. They posted only 194 runs in their 50 overs. The middle-order batter Afif Hossain was the lone batter for his team as he added 72 runs off 107 balls.

For South Africa, Kagiso Rabada led the attack with a five-wicket haul. Chasing 135, the Proteas convincingly won the game. They completed the target within 37.2 overs with Quinton de Kock scoring the most runs for his team i.e 62. Apart from Quinton, Kyle Verreynee also looked in fine form as he hammered not out 58 runs.

South Africa picked up the rhythm in the second ODI and they will be continuing the momentum in the third One Day International as well. It will be safe to bet on the hosts to win the third ODI by a decent margin by the series by 2-1.

It will be safe to put your money on Rassie van der Dussen. The opening batter is enjoying a dream form in the One Day Internationals. The middle-order is the highest run-getter in the ODI series so far with 94 runs in two games at an average of 94.00. The 33-year-old will be playing another good knock on Wednesday to ensure that his team wins the series by 2-1.

The Wanderers Stadium offers a batting-friendly track. A high-scoring game is expected between South Africa and Bangladesh as the bowlers will find it easy to score runs. The spinners can make a difference in the middle overs while the seamers can get some assistance from the pitch in the second half of the game.

Cloudy weather conditions are forecasted for Sunday, March 20 as South Africa will take on Bangladesh in the second One Day International. The temperature will be around 24 degrees celsius while the precipitation chances are almost negligible. The humidity and wind speed are expected to be around 45 percent and 11 km/h.

Bangladesh will have the momentum on their side as they will take on South Africa in the second One Day International of the three-match series on Sunday. Bangladesh stunned the cricket fraternity with their all-round performance in the first ODI.

The visitors aced all the departments to score a victory by 38 runs. Put to bat first, the Bangladeshi batters adapted to the playing conditions well. The Men in Green and Red scored 314 runs in their allotted 50 overs.

Shakib Al Hasan was the top run-getter for his team with a knock of 77 runs. Meanwhile, Liton Das and Yasir Ali also made headlines as they smacked a century each. Chasing the total, South Africa put up a good fight.

Rassie van der Dussen and David Miller stitched a crucial partnership in the middle as they scored 86 and 79 runs respectively off 98 and 57 balls. However, a collapse of the lower-middle-order resulted in the team lagging behind by 38 runs.

Following a victory in the first ODI, Bangladesh are the favorites to win the second ODI as well. South Africa need to come up with a dominating performance in the Sunday game to turn the result in their favor.

Shakib Al Hasan is expected to be the top Bangladesh player in the second One Day International on Sunday. Shakib was the leading run-scorer for the team in the first game with 77 runs from 64 balls. He was also decent with the ball as he bowled at an economy rate of 5.4.

Bangladesh are touring South Africa for a three-match One Day series followed by two Test matches. The first One Day International between the two sides will be played at the SuperSport Park in Centurion on March 18. Friday. Bangladesh haven’t won in South Africa for the past 20 years and they will thus hope to script history this time around.

The SuperSport Park in Centurion has a balanced pitch. The surface has something to offer to both the batters and the bowlers. The team winning the toss should opt to bat second as chasing is easy at SuperSport Park.

Bangladesh and South Africa will encounter mostly cloudy weather conditions as they will take on each other in the first One Day International. The temperature will range from 17 degrees celsius to 24 degrees celsius on Friday. The chances of rain interrupting the game are less as the precipitation chances are just ten percent. The humidity and wind speed will be around 59 percent and 14 km/h.

The fans can expect an exciting battle as South Africa will play against Bangladesh in a three-match ODI series. The two teams are expected to fight tooth and nail as the series forms a part of the World Cup Super League and will impact the qualification chances for World Cup 2023.

Bangladesh are topping the World Cup Super League points table while South Africa are reeling at tenth place. South Africa and Bangladesh will be high on confidence as they are coming after winning their last ODI series.

South Africa made a solid statement by hammering India by 3-0 earlier in the year. Coming to Bangladesh, they defeated Afghanistan in a five-match ODI series by 3-2. If we compare the two teams, South Africa have a greater chance of winning the first ODI as they are a formidable side at home.

For Bangladesh, we will be safe to bet on Mushfiqur Rahim as the top run-scorer. Notably, Rahim is the only Bangladesh player to hit a century on South African soil. The wicketkeeper did well against Afghanistan as well. He scored runs at an average of 32.00.

Quinton de Kock is expected to lead the run-scoring charts for South Africa as they will take on Bangladesh in the first ODI of the three-match series. De Kock was the wrecker-in-chief for Proteas in their last ODI series against India. He ended the series as the highest run-getter with 229 runs from three games at an average of 76.33.