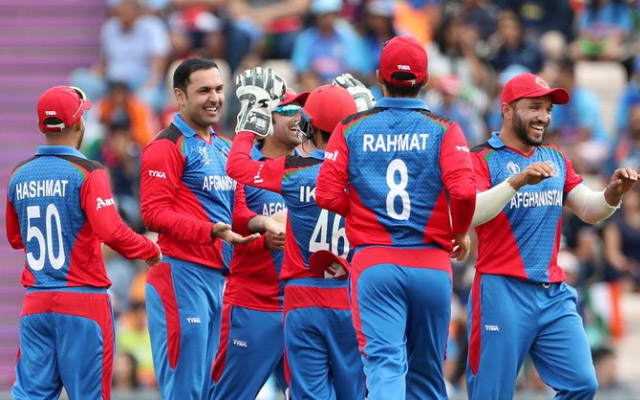 Afghanistan Cricket Board (ACB) have named an updated squad for the T20 World Cup. The board had earlier announced the squad but it was not appreciated by all. Even the skipper Rashid Khan stepped down after the announcement and slammed the board for not consulting him before finalising the squad.

Of the squad that was announced earlier, Sharafuddin Ashraf and Dawlat Zadran have been left out of the main squad and demoted to the reserves category. Meanwhile, Shapoor Zadran, Qais Ahmed and Afsar Zazai have been dropped entirely. Pacer Fareed Ahmad, who was named as a travelling reserve, has been added to the main squad. All-rounder Samiullah Shinwari and pacer Fazalhaq Farooqi have been named as reserves. Five cricket betting apps that you can download on your smart phone.

Meanwhile, the team will be led by Mohammad Nabi. The all-rounder has previously led the team between 2013-15 and was the skipper of the side that participated in the ICC Cricket World Cup in 2015 in Australia.

Afghanistan will go into the T20 World Cup having last played against Zimbabwe in March earlier this year. They were set to play against Pakistan but the series was cancelled following Taliban’s takeover of the country. There were some doubts about their participation in the T20 World Cup as well but the new rulers said the cricket activities in the country can continue as normal. Afghanistan open their campaign against a qualifier team on October 25.