Home » News » “As a Bowler, It’s Quite Scary”, Ravichandran Ashwin on Bazball Brand Of Cricket

“As a Bowler, It’s Quite Scary”, Ravichandran Ashwin on Bazball Brand Of Cricket 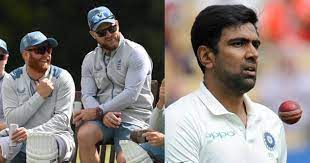 Veteran Indian spinner Ravichandran Ashwin shared his thoughts on England’s new, affectionately known “Bazball” style of play in Test cricket. After struggling throughout the West Indies tour and the Ashes in 2021–22, the ECB hired Brendon McCullum to lead them in Test matches. Joe Root resigned as captain to allow Ben Stokes to take over. Here are the top 10 betting sites in India that you can open on your mobile devices and enjoy competitive odds and all the features you can expect from a mobile betting site.

Under new management, the England cricket team began to play an aggressive style of Test cricket. They succeeded in the Test series against New Zealand and the one-off Test against India. While in the fourth inning, Stokes and company successfully tracked down 300+ targets to produce some noteworthy victories. As a bowler, Ashwin claimed that England’s aggressive play in Test cricket is frightening.

He believes that England’s current playing style is greatly influenced by the pitches, though.

“It was amazing to watch, but as a bowler, it is scary to think where the game is headed. While I think the ball and the pitches have a role in how England is playing. Permitting a certain brand of cricket.”

Ashwin said on the Vaughany and Tuffers Cricket Club podcast

India decided to play with four pacers. And Ravindra Jadeja was the lone spinner in the postponed fifth Test match against England. While leaving Ashwin out of their starting lineup. He continued by discussing England’s new strategy. And stated that given how cricket is developing, teams must find a means to fend off the batters’ attack.

“I think we need to be careful about this brand of cricket being the way forward. Test cricket has been the same for hundreds of years, and games and series will be played like that.”

England scored 378 runs against India, their best successful chase in a Test match. Since McCullum also played the same aggressive kind of cricket during his days, the name “Bazball” for this aggressive style of cricket was inspired by his nickname, Baz. While for India, Ashwin has participated in 86 Tests, 113 ODIs, and 51 T20Is.

He has taken 442, 151, and 61 wickets in these competitions. While the new style of cricket that the England Test squad is playing has been dubbed “Bazzball”. Since McCullum goes by the nickname Bazz. In sports, it is customary to refer to the brand. And the method of play that a team’s coach promotes is “Ball,” is generally followed by the coach’s name.

Under the leadership of new coach Brendon McCullum, England’s Test cricket performance has been remarkable. The former New Zealand wicket-keeper batsman is renowned for his quick scoring skills. In February 2016, he became the first player to surpass Vivian Richards’ record for the fastest Test century by reaching 100 runs in just 54 balls. If you want to see more solid cricket betting tips and match guides from our experts then head to the main betting tips page to help you find your best bet of the day.