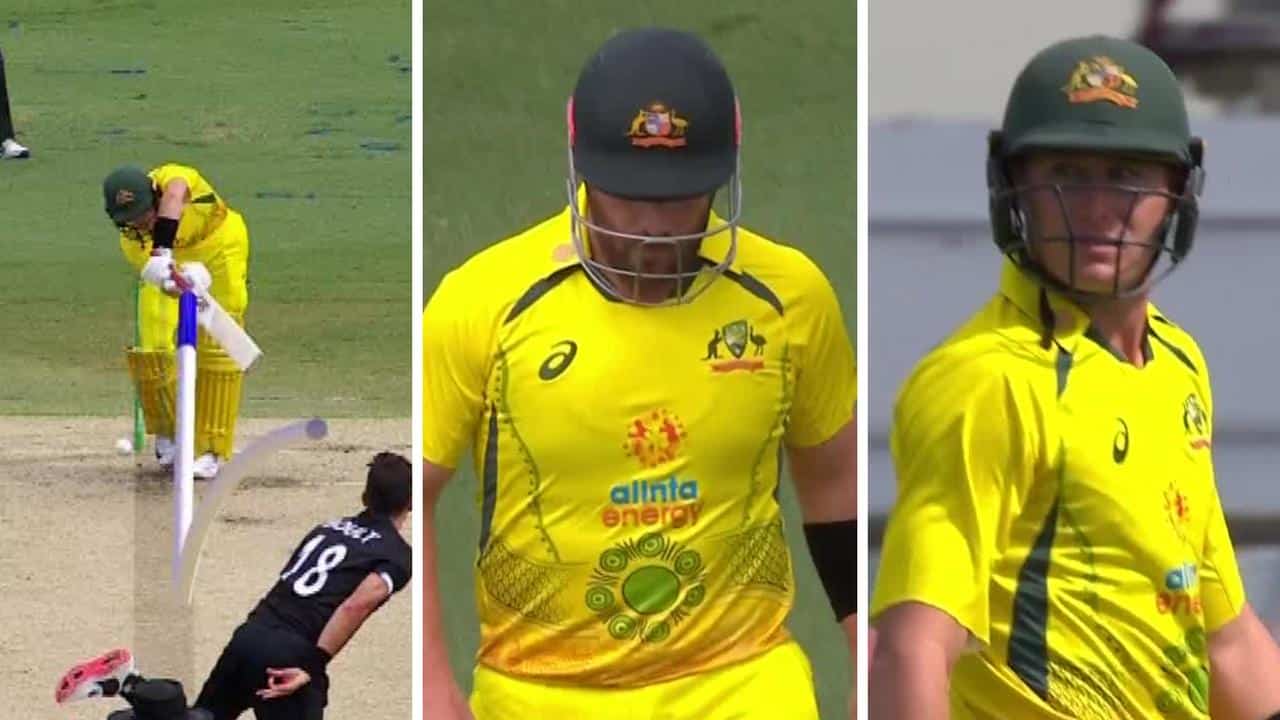 AUS VS NZ: Australian skipper Aaron Finch failed one more time as an opening batter. And it resulted in a third top-order collapse from the Australian team within the space of 12 days. The poor form of Aaron Finch is not letting him free. The kiwi pacer Matt Henry dismissed him in a second ball duck in the second ODI match at Cairns’ Cazaly’s Stadium. After losing the toss, regular Aussie came to pitch and opted to give an aggressive start. Here are the top 10 betting sites in India that you can open on your mobile devices and enjoy competitive odds and all the features you can expect from a mobile betting site.

But it did not go with the at all as Finch handed an easy catch to Kane Williamson. He tried to play a lofted cover drive and the ball landed in Kane Williamson’s hand. In his past five ODIs including three against Zimbabwe and two against New Zealand, Finch has scored only 24 runs. He has faced just 44 balls across the course of these matches. In this match the same bowler, Matt Henry dismissed Finch’s partner David Warner. He scored only 5 runs in this match after facing 11 balls.

AUS VS NZ: A Total Pathetic Performance from Both the Sides’ Batters

After the dismissal of openers, Steve Smith and Marnus Labuschagne tried to hold the innings. But Labuschagne failed too as he also lost wickets after facing eleven deliveries. The procession continues as none of the Aussie settled in the crease. It was only smudged, Steve Smith who was handling the innings from one side. But after a point, he also went back to the dugout. He contributed with his half-centuries and then Tim Southee picked him up.

In the end, Mitchell Starc scored 38 runs and the Australian innings ended up at the score of 195 runs. Trent Boult was the highest wicket-taker with his four-wicket haul and Matt Henry got a three-wicket haul. It was seeming an easy win for New Zealand as they need to score 196 runs in 300 balls. But it did not as per expectations, The entire Kiwi batting order went back without reaching a total score of 100 runs. Only four of the batters had crossed double-digit scores as Australia bundled NZ in 88 runs total.

The highest score was from captain Kane Williamson who scored only 17 runs in this match. The Aussie bowlers did not give any space for the batters. In these, Adam Zampa had appeared as an absolute match-winner. He picked a five-wicket haul and gave away only 35 runs. Starc and Abbott picked two wickets each. And all-rounder Marcus Stoinis picked a single wicket. It was a pathetic day for the batters as none of them played as per their standard. Find the live Cricket Predictions and updates for the upcoming matches around the globe.