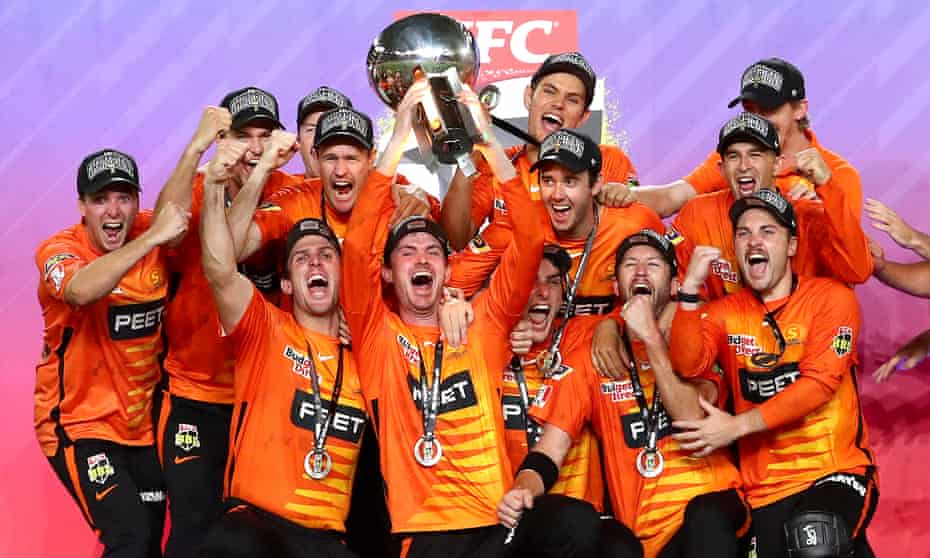 BBL 2021-22: BBL season 11 has come to an end and Perth Scorchers have won their fourth BBL 2021-22 trophy. Scorchers displayed a dominating performance in the final against Sydney Sixers. It was an excellent display of overall performance by the team and the two months of hard work were visible in the last game.

Sydney Sixers won the toss and decided to bowl first. This gave an opportunity to batter from Scorchers to perform at their best and give a good score to chance to Sydney Sixers. However, Scorchers had a slow start and they lost their top-class batters at a very early stage. It was Ashton Turner and Laurie Evans from the middle order who helped the Scorchers to reach a comfortable score of 171 in 20 overs.

As the opening batsman turned out to be a complete failure for Scorchers, it was time for the opening bowling attack to show their magic. Andrew Tye was on top of his game and with the help of Jhye Richardson, the Sixers were all out in just 16.2 overs at 92 runs. The finals had a dramatic end and now the next season will be back after a year. In this article, we have compiled a list of the best 11 from BBL 2021-22. Check out the BBL points table 2022 and get the latest news here.

Hobart Hurricanes are one of the unluckiest teams in BBL. In season 11, they were doing a good job but lost their track in the fifth week. However, their opening batter Ben McDermott has been bliss to watch. Ben has turned out to be the highest scorer of the tournament.

In 13 games, Ben scored 577 runs at an average of 48.08 and a strike rate of 153.87. Not only this, the Hurricanes opener has smashed 29 sixes in the tournament, which is the highest number of BBL season 11. Observing his current performance, Ben has been selected in Australia’s T20 squad and confirmed his name on our list.

For most of the time, Matthew Short was involved in saving Adelaide Striker in the whole tournament. In that process, Short became the highest run-scorer for the team and the third-highest scorer in BBL 2021-22.

Jason Sangha appeared for the second time in BBL. He made his debut for BBL in season 8 of the tournament but after that Sangha was not seen on the pitch. He didn’t have a good season three years back but the 22-year-old batter made sure that in season 11, he leaves a huge impact.

In 12 games, Sangha scored 445 runs at an average of 49.44 and a strike rate of 132.05. Sangha was also responsible to lead Sydney Thunders in the absence of the regular skipper Chris Green. Because of Sangha’s strong performance, Thunders finished at number three in the point table. Read our newest betting tips for cricket.

One of the biggest changes which BBL observed was D’Arcy Short becoming a competent middle-order batter. Hobart Hurricanes must be blessed to have such a strong middle-order batsman. Short had a brilliant BBL 2021-22. The 31-year-old Hurricanes batsman appeared in 15 games and scored 444 runs at an average of 37 and a strike rate of 113.27. He also took 5 wickets for Hurricanes and 10 catches.

After the completion of BBL 11, Short has become the sixth-highest scorer of the tournament. The southpaw must be happy with his performance and will be waiting for the next season to start.

Sydney Sixers is the most successful team in BBL and there are no doubts about that. The primary reason for their success is their skipper Moises Henriques. He is a three-dimensional player who can bat, bowl, and lead his team exceptionally well. Henriques did everything to see Sixers in the finals.

In 16 games of BBL 11, Henriques scored 440 runs at an average of 36.67 and with a strike rate of 133. There is no doubt that Henriques is one of the most hardworking captains who contributes to his team in all aspects.

Glenn Maxwell is a rock-solid middle-order batsman and he has proved in his recent performances. The fourth highest scorer in the tournament has been a star attraction for the fans of Melbourne Stars. In 13 fixtures, Maxwell scored 468 runs at an average of 42.55 and a strike rate of 159.73.

In the final league match against Hobart Hurricanes, he played an unforgettable inning of 154 runs in 81 balls at a strike rate of 240.62. Maxwell has registered his name as the highest scorer in BBL history.

Mitchell Marsh has revived his T20 career in just 3 months and has been the most valuable player for the Australian T20 team and Perth Scorchers in BBL. In just 8 games of BBL, Marsh has scored 347 runs at an average of 57.83 with a strike rate of 142.80. His innings included 15 sixes and 26 fours.

Marsh’s displayed his quality against Hurricanes in a match with a century at a strike rate of 166.67. His consistency in the tournament is unquestionable and his contribution to Scorchers is most valuable. Marsh also contributed with the ball for Scorchers by picking up 5 wickets in BBL 11.

One of the recent gems of international and league cricket is Afghanistan’s all-rounder Rashid Khan. Without a doubt, he is the best all-rounder BBL11 has seen. In 11 appearances, Rashid picked up 20 wickets at an economy of 6.34. With more than 100 dot balls, the Afghani talent has proven himself as a crucial player Adelaide Strikers. He is the fourth-highest wicket-taker in the tournament. Rashid also scored a hat-trick in the tournament against Sydney Sixers in a league game. As a lower-order batter, he was also useful for the Strikers by rotating strikes and maintaining the run rate.

The youngster of New South Wales brought fresh air for Sydney Sixers in the new season of BBL. Hayden Kerr was a competent batter and bowler for Sydney Sixers. His huge score of 98 in play-offs helped the Sixers to fix their place in the finals against Perth Scorchers. In 17 appearances, Kerr picked up 25 wickets at an average of 15 with a strike rate of 12. The Sixers pacer became the second-highest wicket-taker in the tournament and the highest for the team. Kerr is a dual package and will be seen more in the upcoming season of BBL.

Mostly in the T20 format of cricket, a bowler’s consistency helps a team to win matches and the tournament. That is the kind of bowler Andrew Tye turned out to be for Perth Scorchers. Tye’s capability to decimate the opening partnership was the crucial contribution to Scorchers’ winning the trophy.

In 16 matches, Tye picked up 25 wickets at an economy of 8.08. He turned out to be the highest wicket-taker for Scorchers and the third highest in BBL season 11. The 35-year-old is performing at his best and it feels like he is nowhere near to disappearing from the T20 cricket. Find the best betting apps in india that are safe to use.

It is easy for someone to become a test bowler from T20 bowler but it is an impossible task for someone to become a T20 bowler from the test format. Peter Siddle achieved this unachievable task in the new season of BBL. Siddle appeared in 17 matches with Strikers and picked up the highest number of wickets, 30. His economy for the whole tournament was 8.33. BBL season 11 turned out to be a breakthrough tournament for Siddle. He won his first golden cap of the league and will be looking forward to play more games in the T20 format.