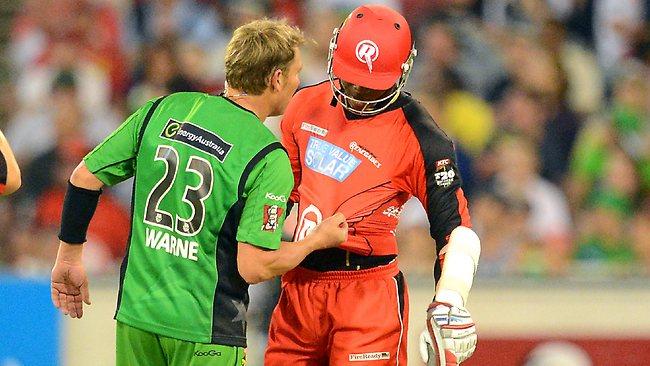 Big Bash League has become an important part of Cricket Australia. It has given some of the best players to the Australian national team. BBL has a blend of young players and experienced competitors, which builds up healthy competition in the league.

BBL has seen ups and downs in the journey but now it has reached a point where it has become one of the most-watched cricket tournaments. Big bash league is attracting viewers and increasing the number in every season. This is because the tournament has given its viewers some memorable moments.

However, Big Bash League has also seen some of the biggest controversies in the past. These controversies were so big that some of them did affect the reputation of the tournament. In this article, we have compiled a list of the 5 most controversial moments of BBL. Watch big bash live match streaming here.

Chris Gayle is one of the best T20 cricketers in the world. He has proven his abilities every time and in every T20 league and tournament. Gayle has made his fan base across the globe with his ability to hit the ball hard and his flamboyant approach to the game. He is renowned for his off-the-ground freakish entertaining skills as well. A similar incident happened in the BBL season 5 where he was interviewed by Network Ten reporter, Mel McLaughlin. During their live interaction, Gayle, shockingly, asked the reporter to go out with him for a drink. This came out as big a huge upset for the reporter and when she became cold, Gayle added “don’t blush baby” remark. the West Indian was punished with a fine of $ 10,000 and he had to apologize to her for his unmannerly behavior. Whenever there is an important game, players tend to lose control over their emotions. It can reach to an extent that it might discomfort other players as well. In BBL season 6, in a semi-final clash between Sydney Sixers and Brisbane Heat, the Sixers were in trouble. Moises Henriques was the leading man of the Sixers and they required 19 runs off 12 balls. Johan Botha was on the strike and he did a pretty good job by smashing three boundaries in the second last over. His boundaries bought Sixers back in the game. However, with four runs needed from three balls, Botha tried to play a reverse sweep on Ben Cutting but he was caught by the keeper. The umpire raised his finger but the South African opposed his decision. Later, Botha was fined $2500 by the match referee. Get free betting tips and tricks here in our website. Melbourne Stars and the Perth Scorchers met in a group stage game in season 2 of the BBL. The bowling maestro, Lasith Malinga, gave a stunning performance on the day and Perth Scorchers were back to the pavilion for 69 runs. However, there was an interruption in the game because of the rain but the game resumed at 7:52 pm local time. The controversy sparked when the revised target was 6 runs in 5 overs. Normally, according to Duckworth/lewis method, a minimum of 5 overs from both teams decides the target. But in this case, Stars already exceeded the target in just 5 overs. In the end, the game was over in just one ball. Hilton Cartwright bowled to Rob Quiney and the match was over.

Another controversy makes it to the list from the BBL season 6. This time it involved big names like Kevin Pietersen and Kieron Pollard. During a league fixture between Melbourne Stars and Adelaide Strikers, both Pietersen and Pollard were involved in a small argument when the former refused to bat against the latter. The English cricketer noticed a tape on Pollard’s hand and asked him to remove it as it was distracting him. Pollard gave a reason that the tape is to protect his bruised hand. This situation was so naive that both the on-field umpires had differences of opinion. After some on-field drama, the match resumed and Pollard was seen wearing the tape. Pietersen didn’t realize that he is mic’d up and everything is audible to the viewers. Read more our 10cric review here in our site.

The ugliest argument ever of the BBL makes it to the top of the list. The two arch-rivals, Melbourne Stars and Melbourne Renegades met in a league game and Marlon Samuels, who was playing for the Renegades, was in a brilliant form that day. In between the match, Samuels was seen holding the shirt of David Hussey as the latter was about to take the second run. Stars skipper Shane Warne expressed his anger immediately on the microphone and was heard criticizing Samuels. Things really got ugly during their argument as Warne ended up throwing the ball at Samuels & Samuels threw up his bat on Warne. At the right time, the umpires interfered and helped both the players to calm down.