Home » News » BBL: 5 Players Who Can Help Their Team to Win Match of STR VS SCO

BBL: 5 Players Who Can Help Their Team to Win Match of STR VS SCO 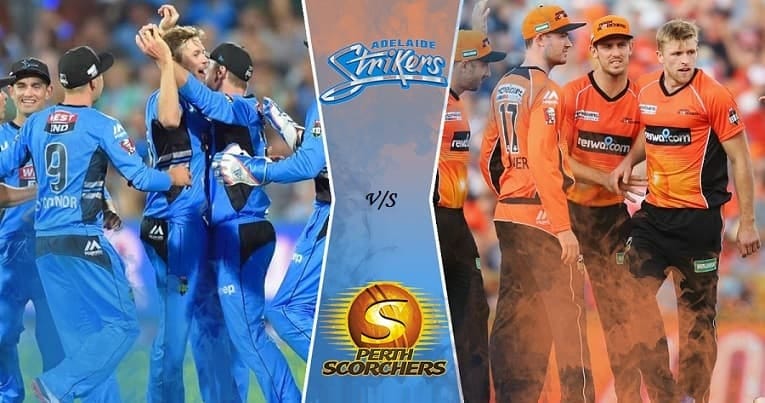 The BBL 12 current table-toppers Perth Scorchers will face Adelaide Strikers in the 48th game of this season at Adelaide Oval. Perth Scorchers are coming from a victory in the last game they played whereas Adelaide Strikers lost to Sydney Sixers. The Strikers have lost their last 3 games and hence will be keen on winning this STR vs SCO encounter. With players like Chris Lynn and Peter Siddle bringing vital expertise, the Strikers have a respectable team. They will, nevertheless, have to play at their peak against a well-in-groove Perth Scorchers team that includes Aaron Hardie, Josh Inglis, and others.

The last BBL, STR vs SCO encounter ended in favour of Perth Scorchers. The two teams so far have faced each other 21 times in the history of the competition. The Perth Scorchers have a slightly upper edge in this BBL competition with 11 wins to their name and Adelaide Strikers with 10 victories.

Owing to the 3 losses in the last 3 games, the chances of Adelaide Strikers made it to the qualifiers are getting difficult. While they’ve retained the 4th position in the table, both Sydney Thunder and Hobart Hurricanes share the same points. The defending champions Perth Scorchers have been one of the most consistent sides in this year’s BBL, this makes the STR vs SCO a much more interesting watch.

BBL: Here are 5 players to watch out for during the STR vs SCO BBL Game-

Aaron Hardie will be the trump card for Perth Scorchers. The middle-order batsman stunned everyone with his outstanding performance in the last game played. With 15 balls remaining, the Scorchers easily won the game as Hardie scored 90 runs off 62 balls. Since Hardie had previously played only occasionally for the Scorchers, many expected him to have a significant influence this year, and he did not disappoint. The player was originally expected to play in the lower middle order. However, since the unavailability of Faf du Plessis and Adam Lyth, he is batting at the top and has done well.

The Australian pacer is the highest wicket-taker in this year’s BBL. In the 12 games that he has played, he has picked up 22 wickets with an average of 16.59. During the last STR vs SCO game that was played in December, Tye had troubled the Strikers’ batsmen and picked up 3 wickets for his team. The player will be determined to replicate a similar performance this time too in order to keep the team at the top of the table.

The Adelaide Strikers’ opener, Matt Short is having the tournament of his dream. The player has overtaken teammate Chris Lynn to become the highest run-scorer in this year’s competition. In just 12 appearances this season, he has scored 458 runs, surpassing any other batter. The opposing team will be counting on the dynamic hitter to do well in the forthcoming game. Perth Scorchers’ main aim will be to dismiss Short early.

The Australian wicket-keeper batsman has been in sensational form in international cricket. In the last wrapped-up test series he played a crucial role for Australia. Keeping the same mindset the player has beautifully moulded himself into the requirements of the shortest format. Prior to the STR vs SCO, he just might have played 2 games this season. However, he has already scored a half-century and will be the one to watch out for.

When it comes to the shortest format of the game, no amount of runs is enough on the board. Adding a feather to the already going strong team of the defending champions is Josh Inglis. While Adelaide Strikers may have the top two run-scorers, Perth Scorchers is not far behind. Josh Inglis is third on the list of most runs scored this year in BBL. He has played 11 innings making 377 runs with an average of 41.88. Along with Aaron Hardie, Inglis too contributed to the Scorchers’ last victory.