Bharat Arun: Jasprit Bumrah is Not The Best Option to Lead India 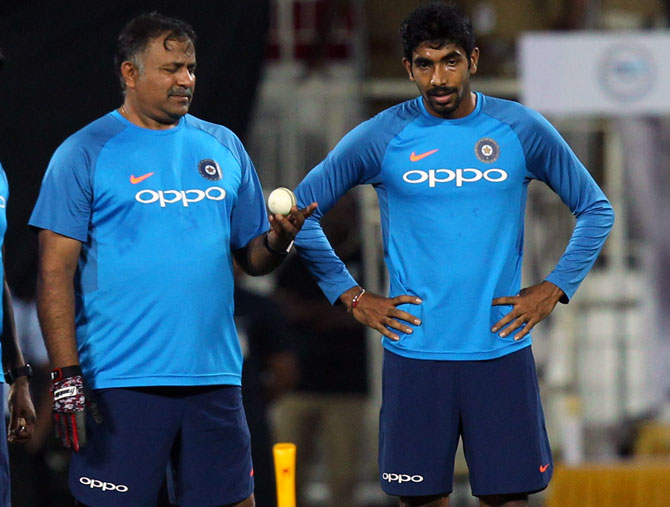 The former Indian bowling coach Bharat Arun believes Jasprit Bumrah is not the right option to lead India. He accounted for Bumrah’s acumen to become a good captain but the job is better suited to a batsman.

Virat Kohli stepped down from the Test captaincy after India lost 1-2 against South Africa. Kohli had earlier resigned from the T20 captaincy after the World Cup and was relegated from the same in the ODIs. It led to a plethora of speculation of who could be the next captain of the Indian Cricket Team.

In the absence of Rohit Sharma, KL Rahul led the team in the ODI series against South Africa. Jasprit Bhumrah was designated as the vice-captain of the team. India suffered a whitewash in the series, with this inviting serious criticism. We have free cricket betting tips here in our site. Do check it here.

I’m not too sure Bumrah can be the captain: Bharat Arun

While speaking to News9, when asked about the prospects of Bumrah as captain, Arun doesn’t seem convinced and emphasized on assigning the role to a batter. He pointed out that bowlers like Bumrah will need sufficient breaks. A batter would be a better choice as a captain as he can play across formats without much rest. He stated:

“I would prefer a batsman because he can play in all three formats without being rested as much. Jasprit Bumrah is someone who has the mind to do it but then again, giving the captaincy to Bumrah … would be able to sustain all three formats all the time? That is the big question.

“Bumrah is the one bowler we have to really take care of. He needs to be given sufficient breaks between matches and series for him to stay fresh. So taking all this into account, I’m not too sure he can be the captain.”

Sharma has been named as the successor to Virat Kohli in limited overs cricket. In his absence, KL Rahul led the side in the ODI series against South Africa. However, he has now returned to the side and will lead the team in the upcoming home series against the Windies. But the question remains who will lead India in Test cricket, and Bharat Arun believes Rohit Sharma is the best choice. Here are some betting apps with free bets. See more here.

​​”It has to be someone who can look at it rationally, as to what can be done for this team to get better. I think yes, Rohit Sharma is there, he’s a very astute captain who has proved it wherever he has captained. He’s got the best out of the players and since Virat has given up the captaincy, Rohit with his experience is one of the best captains.”