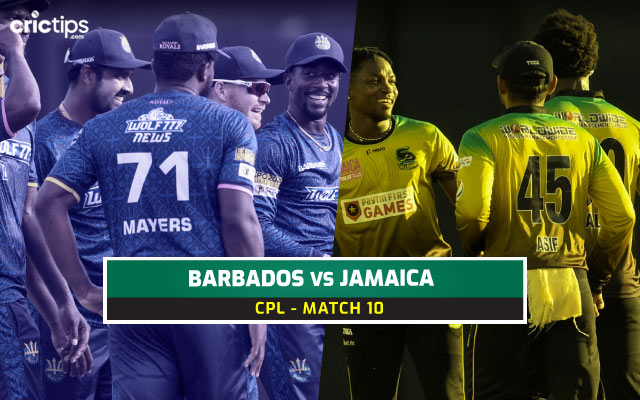 Barbados Royals will take on the Jamaica Tallawahs in game 10 of the CPL 2021. The match will take place at Warner Park, St Kitts on September 1 at 4:30 AM IST

Barbados Royals would be under a bit of pressure going into this encounter which comes after a slow start to the season. One thing which goes in their favour is the fact that after the initial two losses, they didn’t allow the streak to continue into a third match, as they won the third game by 15 runs, against the Jamaica Tallawahs.

Now in a back-to-back matches situation, it is quite obvious that Royals will be starting as favourites, having won the first leg just days prior. But, the Tallawahs have a unit that can punch back. They defeated Saint Lucia Kings in the first match by 120 runs, having scored 255 in their innings. Given these factors, this encounter should be a riveting one.

The wicket in St Kitts has seen a bit of up and a bit of down in the last few matches. Even though short boundaries have heavily favoured the batters, the curator has ensured there is something on the surface for the bowlers.

You can learn more about ‘bet365 english‘ by reading all our review here.

There is no doubt that Andre Russell is the X-Factor player for the Jamaica Tallawahs. In the first match, one can say that he was the difference between a score of 220 and 255. But, the second game was a bit flat for the all-rounder, who failed to deliver with the ball and the bat. In this encounter, knowing Russell, it is no doubt that he would be looking for a comeback.

The captain of this team has the ability to bind this team together. His bowling and batting together make up for some issues in this side. His bowling was quite effective in the previous match. He has been batting quite high up the order in this tournament and it is expected that move will come in handy at some point in time.

He is a much improved cricketer and he can make an impact on the match with both the bat and the ball. His knock of 31 runs from 20 balls in the previous match proved to be handy for his side. He ended the day with three wickets as well during a spell that turned out to be match-winning for his side.

Barbados Royals are expected to win. They will be carrying the momentum from leg 1 of this battle. They did manage to get past Jamaica once and can do it twice as well. It should also be noted that Barbados Royals seem to have a better-sorted XI between these two sides.