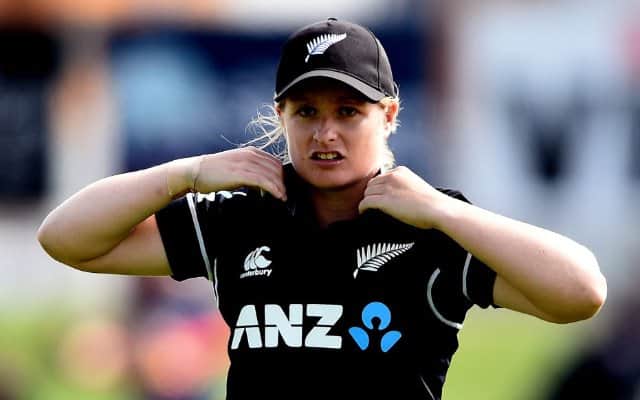 New Zealand Cricket (NZC) has confirmed that all-rounder Brooke Halliday will replace Lea Tahuhu in the White Ferns squad for the upcoming T20I series against England. Halliday impressed one and all in the recently-concluded ODI series when she made her international debut. She hit two half-centuries in both the matches she played and looks set to shine in the shortest format of the game as well.  Check comeon meaning to our full review.

Meanwhile, Lea Tahuhu who sustained a hamstring injury during the first ODI between England and New Zealand, has failed to regain full fitness in time for the T20Is. She had to be carried off the ground and it could be a long break for her from international cricket now.

Skipper Sophie Devine was delighted to have Brooke Halliday in the squad after her brilliant display with the bat in the ODIs. “Everyone saw how well Brooke went in the recent ODI series. She stepped up with the bat and ball offering some handy overs. Although she’s not a like-for-like replacement for Lea Tahuhu, it’s good to see her getting a chance in the T20 format,” Devine said according to Cricbuzz.

In another update, Gabby Sullivan has been told to remain with the squad as cover for pace bowler Hannah Rowe. She was initially picked following Tahuhu’s injury and has managed to retain her spot after Rowe tweaked her quad during the final ODI in Dunedin. Here’s our raghuram cricket tips and tricks. Learn more how we predict matches.

Though New Zealand Women won the final ODI, they lost the three-match series by 2-1. The home team will be itching to start well in T20Is. The first of the three-match T20I series on March 3 with all the three games set to be played in Wellington alongside the New Zealand vs Australia Men’s last three T20Is.