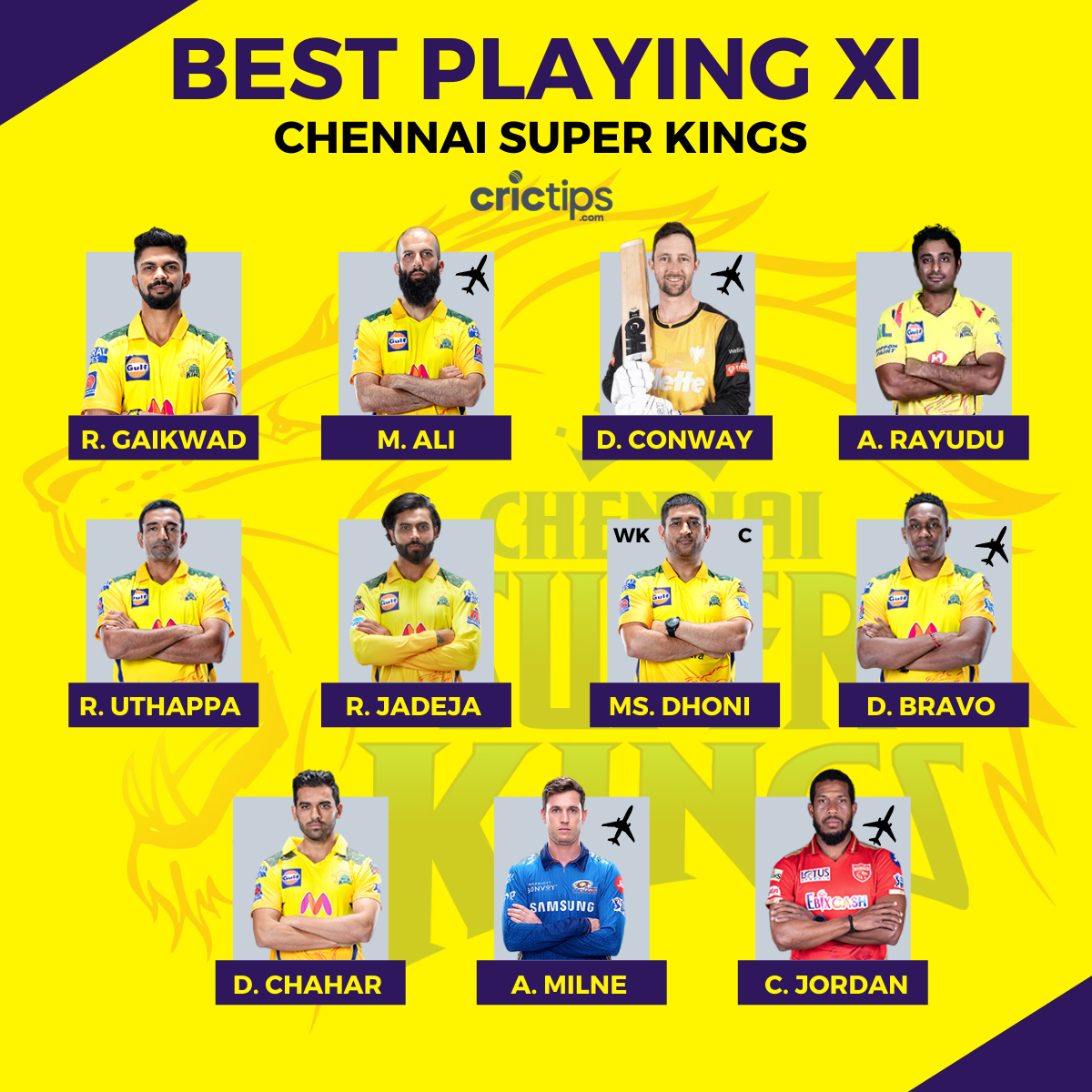 IPL 2022: After the successful wrap-up of the IPL 2022 mega auction, all the teams are in the process to finalize their playing XI for the tournament. Defending champions, Chennai Super Kings, had a good auction time and they bought some of the old faces in the team. The team will be playing again under the leadership of MS Dhoni and they will be planning to win the trophy again. Here are some Cricket predictions for the 2022 Season.

Chennai Super Kings has won the IPL trophy 4 times and that is one less than Mumbai Indians. CSK would like to equalize with their arch-rivals in 2022. This is probably the last season for MS Dhoni and he would like to end it with a good note. There is a cult following to the team and every IPL fan looks forward to witnessing the win for CSK. Before CSK officially declares playing XI, we at crictips.com have compiled a list of the strongest playing XI.

Last year’s highest scorer and orange cap winner Rituraj Gaikwad will defiantly make it to the team. CSK has retained the young power hitter for 6 Crore and he will be opening the innings for Chennai in IPL 2022. Gaikwad is specialized in playing the pace attack and can prove deadly in front of the swing attack.

Devon Conway will be making his debut for IPL with Chennai Super Kings in 2022. He has never played in IPL and this will work to his advantage. Conway is an experienced southpaw and will be opening the innings for Chennai. With Gaikwad at the other end, Conway can take his own time to start hitting the ball.

It seems like CSK made the right choice by retaining the English all-rounder. Moeen is a well-experienced player when it comes to the IPL tournament and has been a match-winner for Chennai Super Kings. His combination with Ravindra Jadeja can prove deadly during the middle overs.

Ambati Rayudu will be seen again while playing for Chennai Super Kings. By buying him for 6.75 Crore, CSK management has very well clarified that he is an important player for the team. Rayudu made his debut for CSK in 2018 and since then his stars started shining in IPL.

In the 2021 season of IPL, Rayudu scored 257 runs at an average of 28.55 and a strike rate of 151.17. Rayudu will be leading CSK’s middle-over attack and can be ferocious against the spinners of the opposition. Read more reviews about Mobile Bet365 here and learn how it works online.

Chennai Super Kings has shown their trust again in Robin Uthappa and they bought him again during the IPL mega auction. Uthappa has always been a hard-hitting middle-order batsman who can be deadly against the death over bowling.

The 2021 season of IPL was not at all good for the player as he was just seen in 4 fixtures. However, he has proven credentials with the team. CSK would like to use him more in the upcoming season of IPL.

The costliest retention of CSK, Ravindra Jadeja, will be proving his worth as an all-rounder. Jadeja has become a legend when it comes to IPL and international cricket. He has helped team India and CSK in some of the worst situations. Jadeja is a match-winner both with the ball and the bat.

MS Dhoni is undoubtedly the most valuable player for Chennai Super Kings. He is a ferocious leader who never gives up even in the most difficult situations. Dhoni is responsible to take Chennai Super Kings to its pinnacle and the whole team is dependent on his decision-making ability.

Dhoni will be acting more as a leader of the team in the 2022 season. His 2021 was not at all good as an individual and Dhoni are aware of it. The skipper will give more chances to his team to win matches so that in future his absence won’t be felt.

Dwayne Bravo has become the most loyal player for Chennai Super Kings. He will be seen playing for the team again in 2022. Bravo is a competent batsman who can hit the ball outside the ground and more than that he is a talented pacer who can bowl continuously at 145 kmph.

In the 2021 season, Bravo was a part of 11 pictures in which he picked up 14 wickets at an economy of 7.81. The West Indian player is part of IPL since its inception and will be adding more value to the CSK squad.

Chennai Super Kings has not done major changes to their squad and fans will be seeing the same team as the 2021 tournament. Deepak Chahar has again become a part of Chennai and will be showing his pace talent for the team. Chahar is a pace bowler and can bat at the lower end as well.

In the 2021 season of IPL, Chahar picked up 14 wickets in 15 matches at an economy of 8.35. The only problem which he should resolve before the beginning of IPL 2022 is his economy. It can come across as a costly aspect for Chennai.

A new addition to Chennai Super Kings’ pace attack is Adam Milne. The New Zealand pacer made headlines in international cricket while playing for his national team. He caught the eye of IPL scouts while playing for Kiwi’s national squad in ICC T20 World Cup.

Milne made his comeback to IPL in 2021 with Mumbai Indians after 2 years of absence. Although he was not able to contribute much to the team. Milne was part of 4 fixtures in which he took 3 wickets with an economy of 9.35. CSK will be giving him more playtime to improve his game.

The English pacer, who was the trump card for team England to overpower the Australian cricket team in ICC T20 World Cup. Chris Jordan is a skilled pacer who can swing the ball and can pick some wickets in the early overs. Combined with Bravo, Chris can prove deadly to the opening partnership of the opposition.

He was a part of Punjab Kings during IPL 2021 season. However, Jordan was just part of 4 matches with the team and couldn’t contribute much. Looking at his recent performances, CSK will be planning to use him in the prime playing XI. If you are looking for free Cricket match betting tips, read more here.