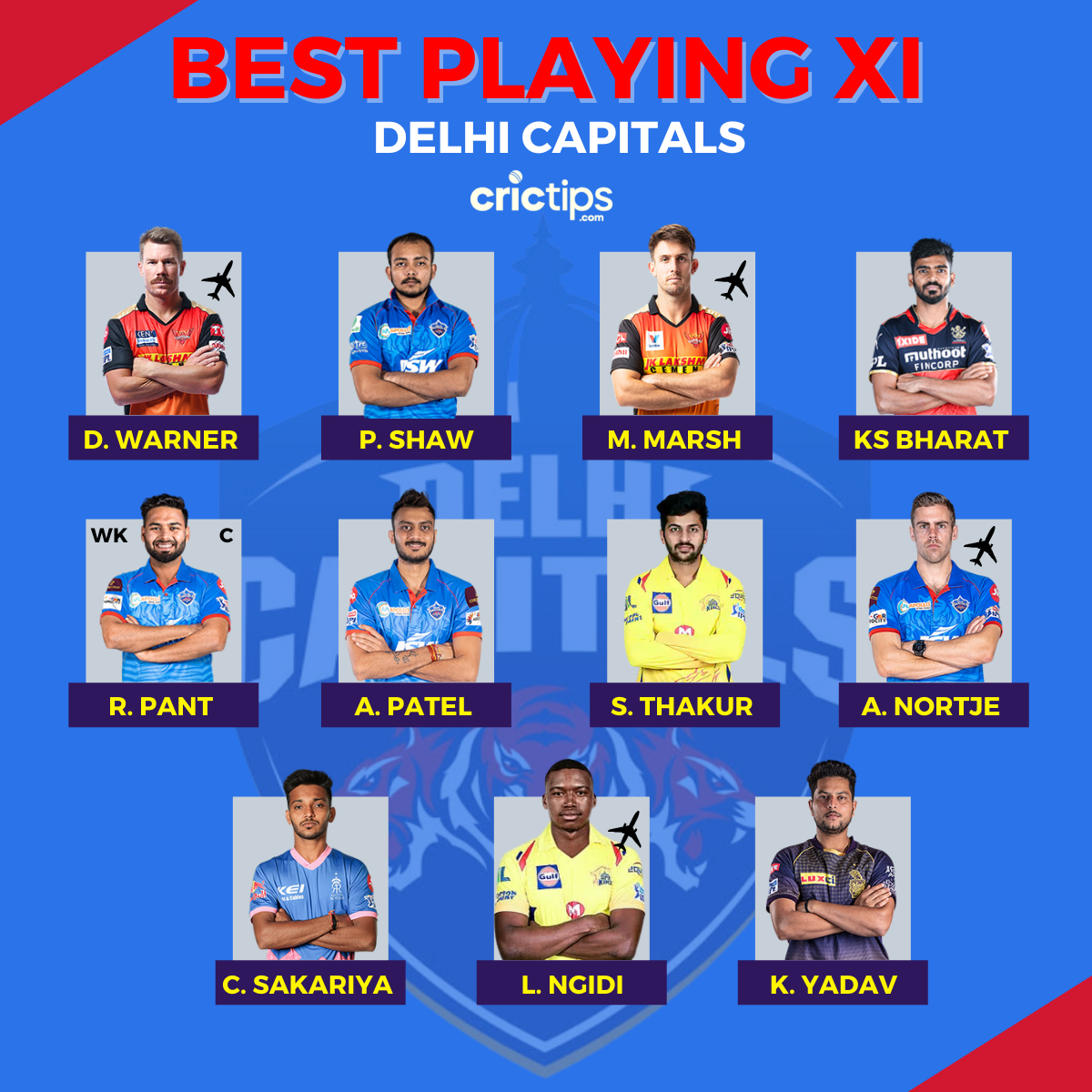 IPL 2022: IPL 2022 mega auctions are over and all the franchises are in the process to finalise their playing XI squad. These strong playing XI will help the team to win the IPL 2022 trophy. One team which was seen buying players aggressively on both days was Delhi Capitals. DC has always been one of the strongest teams in IPL history. Here are more T20 Cricket betting odds for the 2022 Season.

For the 2022 tournament, they have bought some big names for the team. With the presence of David Warner, Marco Janson, and Aiden Markram, Delhi will be expecting to win its maiden trophy. In 2021, Delhi Capitals had a good run in the tournament but were unlucky in the playoffs. They would plan to be more aggressive and ferocious in the upcoming season IPL. In this article, we have noted down the best possible playing XI for Delhi Capitals.

It’s a homecoming for the Australian power hitter in IPL 2022. Delhi Capitals were aggressive in their approach while buying David Warner on day 1 of the auction. They left no stones unturned to do so and he will open the game for the Capitals this year.

Warner had a very disappointing season in 2021 with Sunrisers Hyderabad. He was sacked from his captainship and was dropped from the playing XI. The three-time orange cap winner went through a nightmare in the previous season. This year, Warner would be looking forward to making amends with the past.

There is no doubt that Prithvi Shaw is among the most talented youngsters in Indian cricket. It was because of his brilliant performance in the last season of IPL, he was retained by the franchise. Shaw will be opening the game with Warner this season.

Another Sunrisers Hyderabad player will be seen wearing a Delhi Capitals jersey this year. Mitchell Marsh made headlines in the Big Bash League tournament with his brilliant knocks for Perth Scorchers. Delhi Capitals took note of it and immediately bought the player for the number 3 position.

It is a comeback year for Marsh and that was possible because of his international performances. He is also a pacer who picks wickets with his swing abilities. Capitals will use him as a fifth bowler in IPL 2022. Marsh can prove deadly with his yorkers during the death overs.

KS Bharat is a known face in India’s domestic cricket circle. In January 2021, BCCI named him as one of five standby players in India’s Test squad for their series against England. however, Bharat made headlines because of his last year’s performance with RCB. Here are some IPL betting tips for the 2022 Season and guides for the upcoming match.

As a middle-order batsman, Bharat scored 191 runs in 8 matches at an average of 38.2 with a strike rate of 122.4. Bharat will be crucial for DC at number 4 to play some big shots during the middle overs.

Rishabh Pant will be leading the team and will be handling the middle-order attack as well. He is a competent yorker specialist who can destroy the pace attack in the middle overs. Pant was given the chance to lead the team in 2021 after Shreyas Iyer’s injury.

The trump card of Delhi Capitals, Axar Patel, will be used as an all-rounder. It was very unfortunate to see him getting isolated in the first leg of the tournament because of Covid-19. He missed out on some crucial games for Delhi Capitals.

Patel, upon his return, had a brilliant outing with the Capitals in 2021. He picked up 15 wickets in 12 games at an economy of 6.65. Axar Patel will be a crucial batsman to play big shots at the lower end of the batting lineup.

Having Shardul Thakur in the team is always an added advantage. The match-winner player for Chennai Super Kings will be playing for Delhi Capitals starting 2022. Thakur was one of the prime reasons for CSK’s trophy win in 2021.

The pacer took 21 wickets in 16 matches last year while maintaining an economy of 8.80. Shardul is a player who starts slow but ends up as the strongest player on the team.

The South African pacer Anrich Nortje was retained by the franchise in 2021. Delhi Capitals’ think tank made the right decision by retaining the pacer. Nortje plays in all three formats of cricket but he is a T20 specialist bowler.

In the 2021 season, Nortje was a part of 8 games only because of international commitments. He picked up 12 wickets at an economy of 6.16. This year, Nortje will be planning to make his presence felt in the whole tournament.

The left-arm pacers are always in high demand in T20 cricket and IPL tournaments. Rajasthan Royals were not able to use Sakariya to their fullest capability. However, in 2022m, Delhi Capitals will be giving him more playtime to prove his talent in the market.

With Rajasthan Royals last year, Sakaria picked up 14 wickets in 14 matches at an economy of 8.19. The only problem Chetan will have to work on will be reducing his Economy Rate.

Lungi Ngidi has become one of the most ferocious pacers in South African cricket in recent times. He made his debut in 2018 for IPL with Chennai Super Kings and was loyal to the team for 3 years. However, Ngidi couldn’t contribute much to the team in 2021.

He played just 3 matches with CSK last year but picked up 5 wickets. Since his debut in 2018, Lungi is struggling to become a full-time pacer. Delhi Capitals will be finally using the pacer to its fullest.

Kuldeep Yadav’s journey in international cricket has been a fairytale. He was recently named in team India’s ODI squad and made his comeback after 2 years. In IPL 2021, Yadav is a renowned face because of his spin attack and ability to confuse the batsman at any point.

It was an unfortunate season for the player in 2021. He was suffering from a knee injury and hence couldn’t play even a single game. However, with his new team, Kuldeep will be shooting guns on target in IPL 2022. Get the best online betting Apps for IOS and Android here.