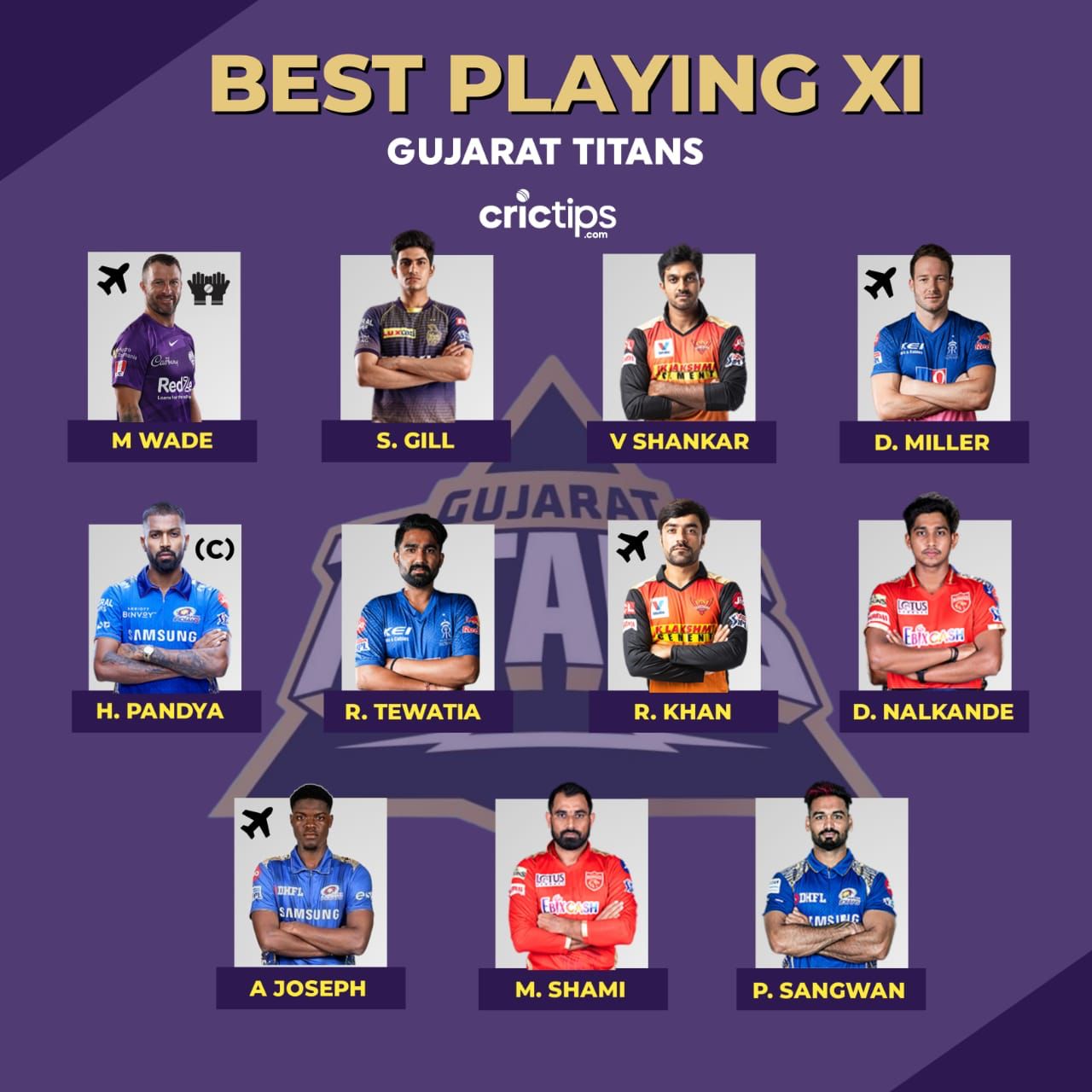 IPL 2022: Gujarat Titans are one of the two new franchises inducted this year into the Indian Premier League. Gujarat Titans are based out of Ahmedabad and are owned by the CVC Capital Partners group. Being a new franchise, Gujarat Titans were allowed to buy three players as their draft picks ahead of the IPL auction. The franchise bought Hardik Pandya, Afghanistan’s Rashid Khan, and Shubman Gill as their draft picks and named Hardik Pandya as their captain. Here are more Cricket tips from the experts for the 2022 Season.

The franchise emphasized more on all-rounders than specialist players and possibly paying the price for it. England opener Jason Roy has opted out of the IPL 2022 citing the challenge of staying in the bio-bubble for an extended period. The Titans had bought Jason Roy for INR 2 cr. He must have been Gujarat’s first-choice opener alongside Shubman Gill and was part of CricTips Possible XI.

However, the metrics have now changed and the franchise will now look for his apt replacement. We will look at Gujarat Titans’ Best playing XI for IPL 2022.

The Australian wicket-keeper batsman will be Gujarat Titans’ best bet for the opener from the squad. Although Wade last played in the IPL in 2011, he has been in tremendous form of late. He was pivotal in Australia’s run to their maiden T20 World Cup last year. His thumping innings against Pakistan took Australia through to the semi-finals. Wade was in splendid touch in the recently concluded BBL as well. He is a free-flowing player and has come of age. He will make a good opening pair with Shubman Gill.

Shubman Gill was a child prodigy and was fast-tracked into the IPL right after the U-19 world cup. He was the player of the tournament in India’s successful campaign in U-19 World Cup in 2018. Gill is a solid batsman and an exponent of class. He was part of the Kolkata Knight Riders until last season and was drafted by Gujarat Titans ahead of the auction. He, along with Matthew Wade, will provide consolidated starts for the Gujarat Titans.

Vijay Shankar will be the other leading Indian all-rounder in the team after Hardik Pandya. In the absence of a genuine third-down batsman, Vijay seems to be the best bet for this role. Vijay Shankar is a sensible batsman and bats with a deft touch. He may not have the flair of Hardik Pandya, but is capable of providing stability in the middle-order. Vijay bowls medium pace and could prove effective in the middle overs.

Here are more legal Cricket betting sites in India for the 2022 Season.

South Africa’s David Miller is known for his aggressive batting. The southpaw proves carnage for bowlers on his given day. Miller holds the record for the third fastest hundred in the IPL in just 38 balls. David Miller’s presence in the middle-order will keep the left-hand-right-hand combination going for the Titans. Miller is also an exceptional fielder and adds value to the team.

Hardik Pandya is India’s ace all-rounder. He has risen through the ranks and has made a name for himself. Pandy is a mainstay of the national team and was an integral part of the Mumbai Indians since his IPL debut in 2015. He, however, is not bowling much due to an injury in his lower back. Hardik is a fluent batsman with an exceptional bat swing. He played purely as a batsman in India’s campaign in the recently concluded T20 World Cup. The franchise has trusted Pandya with the responsibility to lead the team. It will be an asset if he plays as an all-rounder.

Rahul Tewatia was part of the Rajasthan Royals and shot into the limelight after his heroics against the Punjab Kings in IPL 2020. Tewatia is an all-rounder. He bats in the lower middle order and bowls leg spin. Tewatia is a conventional leg spinner and prefers to toss up the ball rather than firing quick at the stumps. However, he is not very conventional in batting. Tewatia is an effective batsman rather than being very sound technically. In the game against Punjab Kings, Tewatia hit 5 sixes in an over to script a historic chase in IPL history.

Afghanistan’s ace spin bowler is a global entity. He is usually in high demand and plays in all T20 leagues across the globe. Rashid belongs to the new school of spin bowling. he doesn’t give the ball much air. Rather, fire them quickly at stumps. He definitely extracts spin and uses variations to deceive the batsman. Hardik and Rashid are the two most experienced T20 players in this squad and a lot will rest upon their shoulders for Gujarat’s success in IPL 2022.

Darshan Nalkande is a young all-rounder from Vidarbha. He was part of the Punjab Kings last year but didn’t play in any games. He bowls medium pace and is a very hany batsman. His presence will provide depth to both bowling and batting. The absence of specialist players will ensure enough chances for this youngster this season.

Gujarat Titans roped in West Indies fast bowler Alzarri Joseph for INR 2.4 cr. Alzarri Joseph was part of the Mumbai Indians and holds the record for the best bowling figures in a match. While playing for Mumbai India, Alzarri marked figures of 6/12 against SunrisersHyderabad in 2019. Alzarri Joseph reminds us of West Indies’ formidable bowlers from the bygone era. He is sharp and quick and owns both bouncers and yorkers. Alzarri is also a handy batsman and can score some quick runs if required.

Mohammad Shami is a mainstay of the Indian cricket team and one of the best bowlers in world cricket at the moment. Shami is set to lead the bowling attack for Gujarat Titans. He excels at bowling yorkers in death overs and proves economical. Shami is a great exponent of seam bowling and is capable of bowling on the reverse swing. Shami, along with Alzarri and Sangwan, will form a formidable bowling attack.

The left-arm fast bowler from Delhi first shot into the limelight after his momentous contribution to India’s title win in the U-19 World Cup in 2008. Pradeep, however, couldn’t hold onto fame for long and was astray due to inconsistency. Though he played domestic cricket, he was not much preferred in the IPL. He is a good swing bowler and as a left-arm bowler, brings the ball into the right-hand batsman. He will prove to be an effective apprentice to Mohammad Shami and Alzarri Joseph.

Get the best betting apps for IOS and Android.