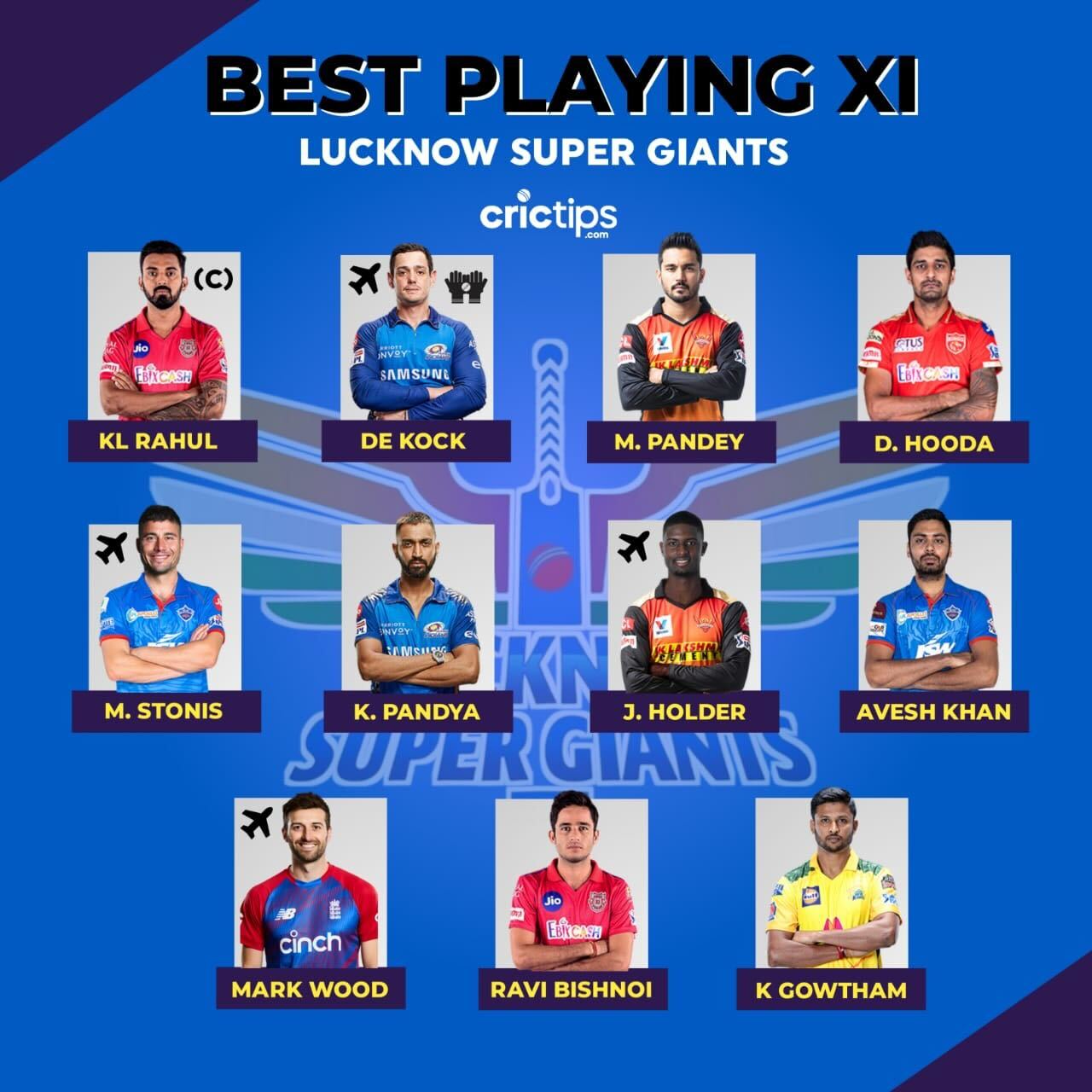 IPL 2022: Lucknow Super Giants is one of the two new teams in the IPL tournament. IPL 2022 is expected to be more exciting and thrilling because of the ten-team affair. Among the two new teams, Gujarat Titans and Lucknow Super Giants, the former looks much stronger on paper. LSG started making headlines before the IPL mega auction after buying KL Rahul from the pool. Here are some best Cricket betting tips and guides from the experts.

In this article, we have done our analysis and have predicted the best possible playing XI for Lucknow Super Giants.

In recent times, KL Rahul has become the most valuable player for team India and in the Indian Premeir League. The year 2021 was brilliant for the player and he became a strong part of the team in all three formats. In IPL, KL Rahul proved his credentials last year while playing for Punjab Kings.

KL Rahul will be opening the game with Quinton de Kock. De Kock is a power-hitter and a fast bowler specialist. He can hit the ball hard out of the ground during the first powerplay. The South African batsman is one of the most talented players in the IPL tournament.

In the 2021 season of IPL, de Kock was a part of Mumbai Indians. He played 11 matches and scored 297 runs at an average of 29.70 and a strike rate of 116.01. During a lot of crucial matches, de Kock has been a match-winner for his team in IPL and LSG would like him to repeat what he does the best.

Manish Pandey is a known face in domestic cricket in India. He was last seen with team India in 2021 playing an ODI against Sri Lanka. However, Pandey is an important player in IPL and LSG will be using him as a middle-order batsman.

Deepak Hooda had a very disappointing season last year as an all-rounder. However, he made his comeback in international cricket very soon. The ex Rajasthan Royals player will be playing with Lucknow Super Giants now and would like to revive his IPL performance.

Hooda is a middle-order specialist and an all-rounder. He can be useful for the team with his pace during the middle-overs to pick some crucial wickets.

The Australian all-rounder, Marcus Stonis, made his debut for IPL in 2015 with Delhi Daredevils. In IPL 2021, Stonis was seen playing with Delhi Capitals. However, he is yet to find his best season yet in IPL and it is expected that LSG will be making him do so.

Stonis is a competent right-handed batsman who can maintain his strike rate up to 125 in the T20 format. As a pacer, Stonis can keep his economy around 8 but in the 2021 season, he was one of the costliest players for the Delhi Capitals. Read more reviews about Mobile Bet365 here and learn how online betting works.

Krunal Pandya has been one of the most unpredictable players in Indian cricket. At one point he was one of the best performers for Mumbai Indians after making his debut for the team in 2016. As of now, Pandya has lost his charm in the IPL tournament.

After a disappointing season last year, Pandya would like to make a good comeback for his new team. He is a competent all-rounder who can prove deadly at the later end of the batting. Pandya has shown in the past that he is a death-over specialist.

Jason Holder was last seen in the IPL tournament with Kolkata Knight Riders in 2016. Since then he has not played in the tournament at all. However, in international cricket, Holder is a proven T20 specialist who can win matches in the most difficult situations as well.

Avesh Khan has been in news recently because of his exceptional performances in international cricket. He is a new boy in town who is disciplined with his pace attack. Avesh was a crucial part of the Delhi Capitals till the IPL 2021 and this year he will be seen wearing an LSG jersey.

It was a surprise move by Lucknow Super Giants when they started bidding for Mark Wood during the IPL mega auction. The 32-year-old English pacer was last seen in IPL with Chennai Super Kings in the 2018 season of the tournament.

Wood is a competent fast bowler who will be combined to attack the opposition with Avesh Khan. Overall in T20i cricket, Wood has played 19 matches and has picked up 26 wickets while maintaining an economy of 8.76. Wood will have to keep a check on his economy for a successful season in IPL this year.

Ravi Bishnoi is one of the recent discoveries by the IPL tournament. He made headlines after picking up Rishabh Pant as his maiden wicket while playing for Punjab Kings in 2020. Bishnoi made his debut for team India in the T20 format against Sri Lanka this year.

Overall in IPL, Bishnoi will be handling the spin attack of the team K Gowtham. The 21-year-old Indian spinner can be deadly in the middle-overs or during the second power play.

The 33-year-old spinner is one of the most experienced cricketers when it comes to domestic cricket in India. K Gowtham was last seen with Punjab Kings in 2020 and that too in just 2 matches. The right-arm spinner has been a late bloomer when it comes to international cricket.

Since Lucknow has very less options for off-spin, K Gowtham will be their full-time choice to go for. If combined with Ravi Bishnoi at the right time, he can successfully control the run-rat of the opposition.