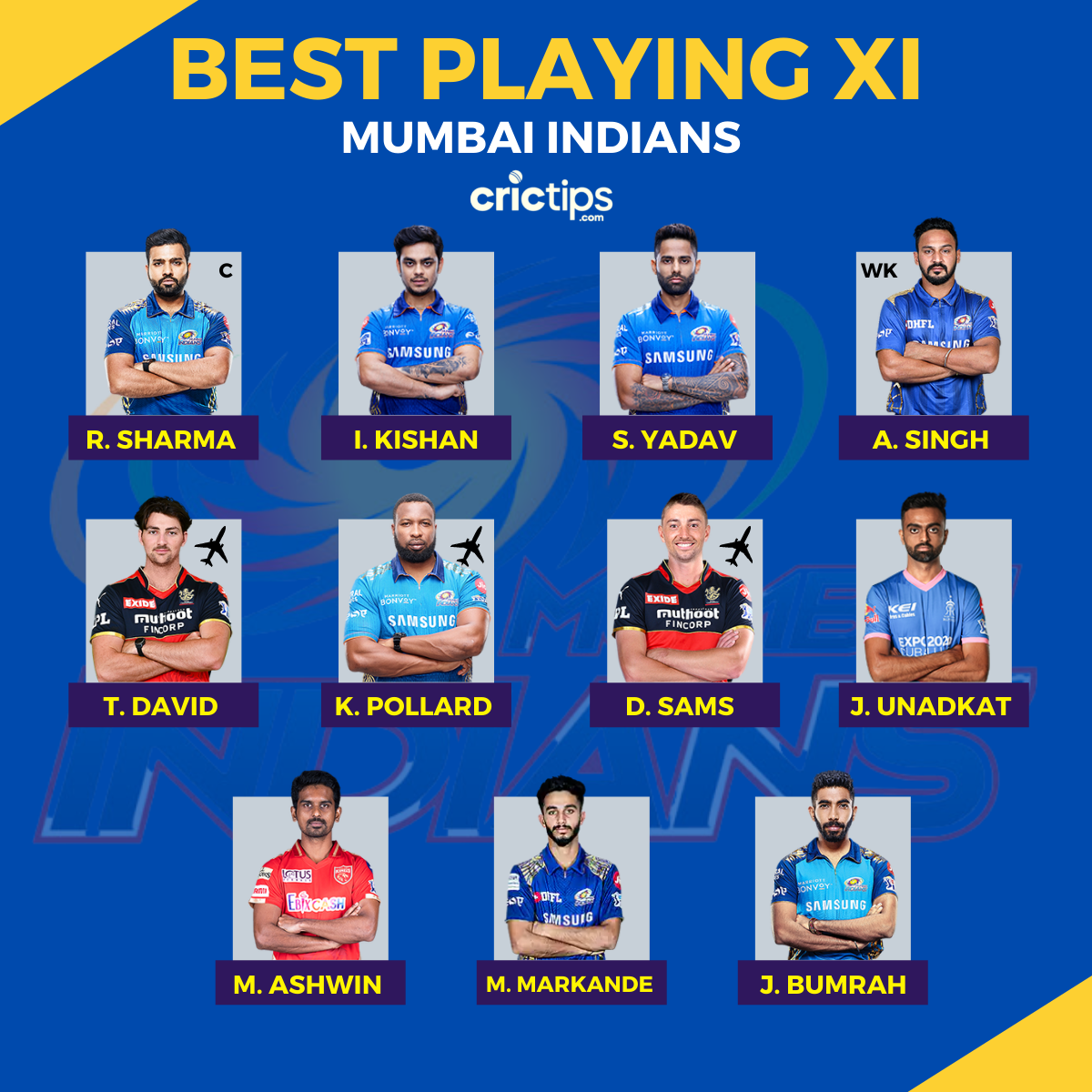 IPL 2022: The five-time champions didn’t perform as per the expectations in the last season as they would have wanted. But as one says, the new season will bring new opportunities. Mumbai Indians retained their main core of players ahead of the auction. The players retained were Rohit Sharma (16 crores), Jaspreet Bumrah (12 crore), Suryakumar Yadav (8 crore), and Kieron Pollard (6 crore). MI entered the auction with a purse value of INR 48 crore. For best Cricket betting tips, read more here.

And the franchise bought 21 players in the auction, including 13 uncapped players, which shows that MI is looking to build a team for the future. But the next challenge is to build a team and choose the right combination for their playing XI. So here we have brought you the strongest XI for the Mumbai Paltan that can lift the IPL 2022 trophy.

Being a captain, Rohit Sharma will be the first and best choice in the team. He will play as an opener for the team. He was the first retained member of the team ahead of the auction. The franchise retained him at a price of INR 16 crore.

Indian skipper is one of the best openers playing around. He was also the best performer for the team in the 2021 season. He played all thirteen games and scored 381 runs at an average of 229.30.

As Quinton de Kock is no longer with the team, Ishan Kishan will be the opening partner for the skipper. Mumbai Indians released him ahead of the auction due to only a four-retention policy. But they re-bought him in the auction and paid a massive amount of INR 15.24, which makes him the costliest player in the 2022 auction.

Now the young wicket-keeper is also a regular member of the Indian team in white-ball cricket, so he must be confident enough to give MI the start they want. The wicket-keeper batsman has also proved himself on the international circuit, which makes him the best choice as an opening partner for Rohit Sharma.

India’s Mr. 360 will be batting in his usual position, which he bats for the Mumbai Indians. The franchise showed faith in him and retained him at a price of INR 8 crore. And now this is the time to return the favour to this faith. The right-hander plays in the middle-order for the Indian team, but he is good at whatever position he plays.

He also played some good innings last season. Suryakumar played 14 matches in 2021 and scored 317 runs at an impressive strike rate of 143.43. The 33-year-old is one of the best middle-order batters India has right now. Read more 10cric reviews here and learn how betting works online.

: Mumbai Indians purchased Anmolpreet Singh for the price of INR 20 lakhs in the auction. He is a confident middle-order batsman who is good against both pace and spin bowling. Earlier, he had been a part of Mumbai Paltan last season but didn’t get to play.

He just played one match against CSK and scored 16 runs. However, the team would give him more confidence to help him grow more with the team. Anmolpreet is an exciting talent, and he has also performed decently at the domestic level.

Tim David became the first Singaporean player to be a part of the IPL. He was part of RCB last year in the UAE leg but just got one game to play. But as per his performance in the ongoing PSL 2022, his stock rose overnight in the auction. And that’s the reason the Mumbai Indians spent INR 8.25 crore to get his services.

The 25-year-old all-rounder is a big hitter and can bowl some useful overs in the middle. And now, as the Pandya brothers are not a part of MI, someone needs to finish games for MI with Pollard. And per the team owner, he is the best replacement for Hardik Pandya.

The West Indies white ball skipper will be the most important part of the Mumbai Indians’ batting order. He has been part of MI set-up since the 2010 season. He was the only international player retained by the franchise at INR 6 crore. And now, with no Pandya brothers in the team, all the onus will be on Pollard to finish off the games for Mumbai Indians.

The hard-hitting all-rounder played all 14 games last season and scored 245 runs at a strike rate of 148.48 with five wickets from his bowling. He can tonk the ball hard and can win the match in the span of a few overs. His vast experience makes him one of the best finishers in the world.

Daniel Sams is a genuine all-rounder, Mumbai Indians has got in the auction. He is a really good batsman who can tonk the ball very hard. And he is also a death-over specialist with a bowl in hand. The franchise bought him at a price of INR 2.6 crore.

Surely, he will be a good choice at the death overs with Jaspreet Bumrah, to go with his hitting ability. However, he has shown in the Big Bash League how good he is in all three departments of the game.

The veteran IPL pacer will be among the first choice pacers for the playing XI. With all his experience of playing in the IPL, he could be a valuable asset for the Mumbai Indians. His knack for picking vital wickets could be important for the Mumbai set-up.

The franchise bought him at a price of 1.3 crore at the auction. He played for Rajasthan Royals in last three seasons. And as an Indian pacer, he will be a good choice for Mumbai pitches, and his slower ones are also hard to pick for the batters.

Mumbai released Rahul Chahar, Piyush Chawla, and Krunal Pandya ahead of the auction. And their spinner department will be a cause of concern for the management. However, they got Murugan Ashwin in the auction at a price of INR 1.6 crore.

Mumbai’s spinning attack will mainly depend on him. That’s why he will be their first choice spinner for the playing XI. M Ashwin can offer a lot of variety in his bowling. Especially on the pitches in Mumbai, he could be lethal.

The IPL 2022 is likely to be played in Mumbai only. And the pitches in Mumbai are always helpful for the spinners. And Mayank Markande could be their second spinner for the playing XI. Mumbai Indians bought him at a price of INR 65 lakh at the auction.

However, the young spinner didn’t get many chances last season, but this season he is likely to get many matches for MI. One of the main reasons is that he can bring a lot of variations to the table.

No doubt, Bumrah will be the leader of the bowling attack for Mumbai Indians. The star pacer has been performing consistently for them over the years. Last season, he was amongst the top three wicket-takers in the tournament. He finished the season with 21 wickets at an economy of 7.45 in 14 IPL games. He was retained by the franchise for an amount of INR 12 crore.

The ace pacer will be a definite pick for MI in the playing XI. He was the highest wicket-taker in the 2020 season and helped Mumbai win their fifth IPL title. Bumrah will be the most lethal weapon for MI to win the trophy this year. Know why Bet365 is legal in India and how online betting works.