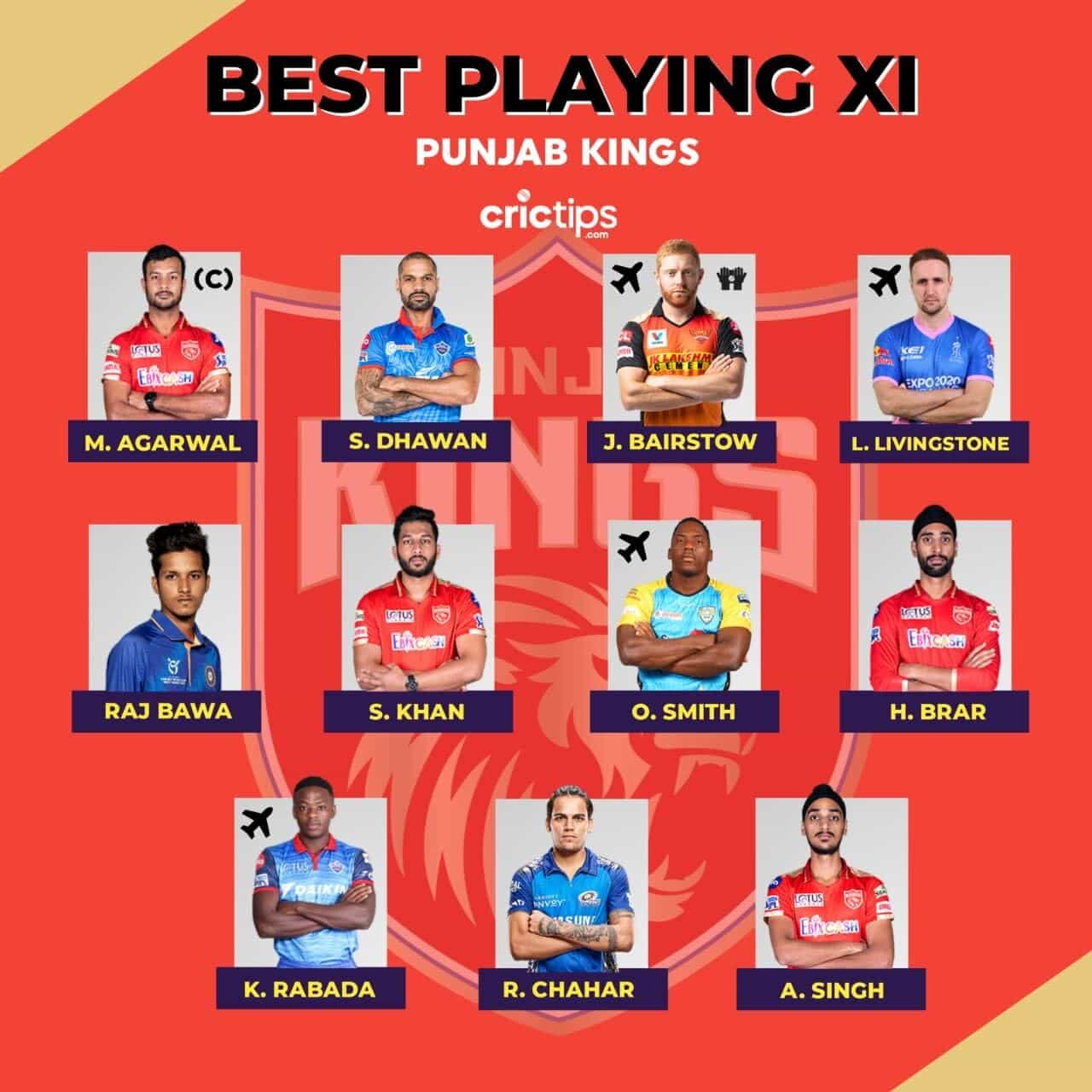 IPL 2022: The Punjab Kings franchise was one of the teams that had a successful outing in the mega auction. Only Mayank Agarwal and Arshdeep Singh were retained by the Punjab franchise prior to the auction. They came into the auction with the largest prize pool. And it’s safe to say that the Kings covered all of the bases. For more IPL Cricket betting sites and Match predictions, read more here.

The acquisition of a veteran in the form of Shikhar Dhawan, as well as the arrival of other solid names like Jonny Bairstow and Liam Livingstone, makes the current Punjab Kings lineup fearsome. Livingstone is in a pick for INR 11.5 crore after a heated bidding war. Odean Smith, Shahrukh Khan, and U19 all-rounder Raj Bawa are among the main players in the team. Kagiso Rabada and Arshdeep Singh will bowl in the powerplay and death overs, respectively. While Odean Smith, a West Indian bowling all-rounder, will be their mid-innings specialist.

We’ll take a look at Punjab Kings’ best starting XI in this article:

Mayank Agarwal, one of India’s top opening batsmen, was one of the two players retained by the team heading into the mega auction. The right-hander has had one of the most consistent runs in the game after being purchased by Punjab Kings in the 2018 auction. The Kings retained the batter, who hails from Karnataka, for INR 12 crore.

Shikhar Dhawan is one of the most seasoned batters in the tournament’s history. The Rajasthan Royals and the Delhi Capitals were in a bidding battle over Dhawan’s services. Punjab jumped in when RR dropped out at INR 4.8 crores. After a long bidding war, the southpaw is eventually joining the PBKS for INR 8.25 crores.

Jonny Bairstow, one of the most aggressive hitters in the league in recent years, was a prized pick heading into the auction. In previous IPL seasons, the wicketkeeper batter had played for the Sunrisers Hyderabad. In the blockbuster auction, the Yorkshire wicketkeeper batter is included in the PBKS for Rs 6.75 crores.

Liam Livingstone is now one of the most powerful batsmen in international cricket. He’s also improving his bowling and can now play at number four as an all-rounder. Over the previous 12 months, Livingstone’s rise in white-ball cricket has been remarkable. Here are our daily top IPL betting sites and guides for the 2022 Season.

Raj Bawa is a rare combination of right-arm pace and left-hand batting, and he was one of the shining stars of India’s successful Under-19 World Cup campaign. He was instrumental in India’s victory at the U19 World Cup earlier this year. In the final of the ICC Under-19 World Cup, the young player took a five-wicket haul and smashed Shikhar Dhawan’s record for the highest individual score by an Indian in the tournament.

The tall big-hitting all-rounder, who hails from Tamil Nadu, is included in by the franchise with whom he spent the previous season. Khan is expected to give the crucial energy in the middle order, which has been one of PBKS’ campaign’s numerous challenges last year. Punjab Kings purchased him for INR 9 crore.

Odean Smith is one of the most recent recruits to the West Indies’ arsenal of pacers who is capable of striking the ball out of the ground at will. In the recently finished ODI series between India and the West Indies, the 25-year-old astonished everyone with his all-around abilities. Smith was a member of the West Indies Under-19 team that won the World Cup in 2016. But now he has only been around for about six months.

Harpreet Brar, a left-handed all-rounder, is one of the Kings’ talented finds last season. The all-rounder is back for the PBKS in INR 3.8 crore, after being available at a base price of INR 20 lakh. Last season, Brar made his debut and wowed the crowd with some fantastic bowling spells.

Rabada was expected to spark a bidding war between all 10 teams after being released by the Delhi Capitals ahead of the 2022 auctions. Teams rushed to sign the 26-year-old, who played for the Delhi Capitals till the 2021 season, because of his ability to take wickets at any stage throughout the game. In the Delhi side, Kagiso Rabada built a strong partnership with Anrich Nortje, but in the Punjab Kings XI, he will be on his own.

In the previous two seasons, Rahul Chahar was a member of the Mumbai Indians, and he was instrumental in the team’s championship victories in 2019 and 2020. Following his achievements for the five-time champions, the leggie was selected ahead of Yuzvendra Chahal in India’s T20 World Cup-winning side. Chahar didn’t play much in the 2021 season, but in the previous two IPL seasons, he took 28 wickets.

Arshdeep Singh, a young and local pacer, is one of the two players retained by the Punjab Kings ahead of the mega auctions. The 23-year-old has been one of the most exciting discoveries in the IPL in recent years. Last year, he had his best IPL stats, taking 5/32 in a match against the Rajasthan Royals.