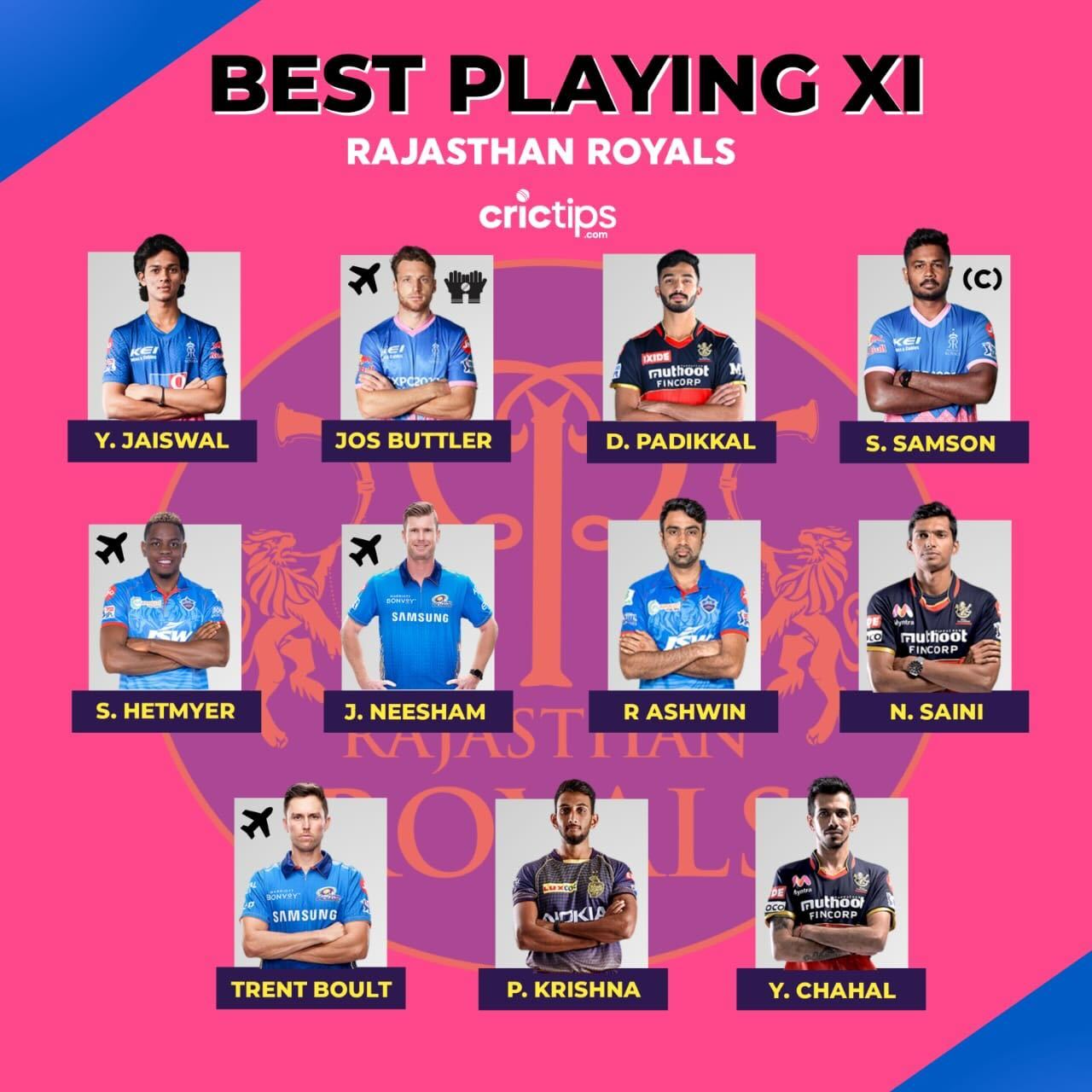 IPL 2022: Rajasthan Royals entered the IPL 2022 mega auction with a decent purse value of 62Cr. Before the mega auction, they have retained three players from last year’s team. The franchise chose to stick with their captain Sanju Samson and boss of the game Jos Buttler. They also show their belief in an uncapped local Indian batter Yashasvi Jaiswal. This time Royals had chosen to add some quality Indian players rather than overseas. Over the years fans have observed that English plafyers attract this franchise pretty much. They finished their last season in 7th position on the table and past many years they were not performing well. Check all IPL teams lists here and Match prediction on our site for the 2022 Season.

So this time they change their thinking towards the squad selection in the auction. Kumar Sangakkara will continue his work in the same position where he was last year. Rajasthan Royals had built a good squad side it seems like this they have a chance to make it to the finals. But they might be face difficulty to create a perfect combination as they have too many top-order batters. So here we have brought you the strongest XI for the Rajasthan Royals that can lift the IPL 2022 trophy.

Not just with his story but also with his performance this boy has won many hearts. Royals gave him a fair amount of games to participate and he grab that opportunity with open arms. He impressed everyone with his attacking mindset in the opening batting. And thus it became brilliant move Royals to add this 20-year-old boy to their team. Rajasthan Royals has retained him in the uncapped players’ category for INR 4 Crore. Yashasvi can go for the auction round and maybe get a more amount contract from this but he chose to stay there.

Last year Jaiswal had 10 games to perform and score there 249 runs. He had an attacking strike rate of 148 which was the main noticing from his knocks. The franchise is expecting this same behavior again this year from Jaiswal. Everyone knows he has lots of potentials and he can add some good attributes in his batting under Sanga’s guidance.

Now the most critical decision for Royals will be where they should put Buttler. Undoubtedly Jos Buttler is the best white-ball batsman in recent time. Now question where should Buttler bat. In the initial day’s career, Buttler used to bat in down order but he got the best result in the opening. As it says you don’t need to fix anything which is not broken. Last year Buttler has proved a great combination with opening partner Jaiswal. He scored his maiden IPL century last year but unfortunately miss out few of the games due to international commitments.

Buttler is an absolute match-winner player with 360 batting skills. He scored 254 runs in seven IPL games last year having a strike rate of 153. Moreover, Buttler had a good T20 world cup campaign last year where he played some crucial innings for England. Rajasthan retained him with INR 10Cr which he deserves well.

Over the years if RCB found a balance in their batting department so Devdutt would be the prime reason for them. RCB was very on their stars Virat and ABD but with Devdutt’s growth, they found another pillar in their team. The same thing Royals should try on their side also. Batting of Royals seems very dependent on Sanju and Buttler so if they put Devdutt in the playing they may find another support. Although Devdutt use to be the opener in the RCB team but here he has to play in the no.3 position which will bring a massive difference in his game.

Royals had an intense bidding war against RCB, CSK, Mi for Devdutt in the auction and finally, bagged him with INR 7.75cr. In the year 2020, Devdutt had a handsome season in domestic cricket. And he successfully brought this form into the 2021 IPL season. Last year he score 411 runs in 14 IPL games at an average of 31 including his maiden century. This year he should continue his form in a new batting position in a new franchise.

Sanju Samson had done a decent in captaincy but was impressed a lot more with his batting. In the last few games of the previous year’s IPL, half of the RR’s total was coming from Sanju’s bat. Maybe he can not be doing good when it comes to the national team but he is improving over the years in the Royals dugout. 2021 was the debut year for him as the leader of the Rajasthan Royals.

The franchise had retained him before the IPL 2022 mega auction with a whopping amount of INR 14Cr. And it is official that this against Sanju will lead the team. Last year Royals have some deficiencies in some of the departments but this year’s squad is looking compact. Last year was a good one for him as a run-getter as he scored 484 runs in 14 games at an average of 40. Previous he started his season with a magnificent century. Here are some Bet365 betting tips from the experts for the 2022 Season.

This Guyanese cricketer is very strong against spin bowling and this may be the reason why succeed in Indian pitches. He comes as a left-handed option in the team with strong striking ability in leg side areas. He would be the perfect choice for the middle order responsibility. It will be nothing new to him to play in the middle order as he use to bat in the middle order for DC and his national team.

Rajasthan bagged him with an amount of INR 8.5 which is a pretty good deal. At this price, they got middle-order batter who can finish the game. Last year he was in Delhi Capitals where he scored 242 runs in 14 IPL games last year at an average of 34 with a 168 strike rate. Hetmyer has some injury concerns and RR will expect that he will be fit for the whole season.

Rajasthan Royals has taken James Neesham to the very last stage of the IPL 2022 mega auction. RR picked him at a base price of INR 2Cr. He was a part of the various franchise throughout the years and last year he shares a dressing room with the Mumbai team. There he did a decent job and after that, he joins his national team New Zealand for the T20 world cup campaign.

There he was an underdog but came trending names after his semi-final inning. He played a crucial cameo in the T20 world cup semi-final and we can say if he did not score that valuable runs NZ could lose that match. His IPL stats are not that good and it does not show this all-rounder’s abilities. He is a very underrated player in this league but he can make it big if the Royals give him chances to perform.

Delhi Capitals has not retained Ashwin although he had done a great job there. Ashwin has been doing exceedingly well in the last three seasons. Despite he was taking a bunch of wickets but in the economic sense he is the best in the business. He has the ability to bowl with the new ball which is very rare as a spinner.

Rajasthan bagged this veteran spinner with an absolute steal deal of INR 5Cr. This is a very good deal for the franchisee as they can get innovative and experienced Indian spinner. He is very handy with the bat and can contribute some valuable runs with his bat. The most praising thing about Ashwin is his economy. He has a career economy of 6.7 in 167 games which is a terrific thing to have.

Royals picked Saini on the second day of the IPL 2022 mega auction. Lucknow was the franchise that showed their interest first to Saini and start the bid. After the theme, Mumbai Indians joins the bid but in the end, Rajasthan got Saini in INR 2.6Cr. Indian speedster in this price is a great deal as there were very few Indian fast bowling left.

Previously Saini was a part of DC and RCB. The bowling units look balanced with the addition of Saini. He got the height as well pace so RR should groom this bowler under a good guidance.  Saini has played 28 games and has picked 17 wickets at an economy of 8.47 and an average of 48.7.

And here comes the seamer with brings the quality into the pace attack. Boult can bowl at 140 speed with both sides swings. He was a vital member of the Mumbai Indian side for two winning seasons 2019 and 2020. His name was on the marquee players list and RCB started the bidding along with Mumbai Indians for him. But and the again Royals get valuable player in their squad with INR 8.39Cr.

Boult has lots of IPL experience as he has taken 76 wickets in 62 IPL games so far at an economy rate of 8.39. He was very effective with accurate yorkers in the death overs. Last season he picked up 13 wickets in 14 games. This was not a good season for him he will be looking forward for this season IPL 2022.

Prasidh Krishna is one of the most expensive players in this IPL 2022 mega auction. After a bidding war between RR, LSG, and GT RR bagged Krishna with a handsome amount of INR 10Cr. Krishan had shown quality bowling against WI in the ODI format. He is traveling with Indian Team for many series and performed well. Last year he was in the KKR squad and had made a good pair with Pat Cummins.

He has picked up 12 wickets in 10 games last season. He picked the wickets in the middle overs and that was very helpful for KKR. He has improved him since the last two years and will make a good match with boult. He got a bounce in his bowling and can reach up to 145 speed.

Chahal was the most anticipated player in the IPL 2022 mega auction. Everyone was expecting that he would be one of the expensive players in the mega auction. But it did not happen as we saw spinner did not get such amount as fast bowlers got. RR got Chahal in INR 6.5Cr and this is the best deal for Royals in the whole auction process.

Chahal had become one of the vital members of RCB for several years but this year will wear a new jersey. Last year he played like a champion and got 18 wickets in 15 games. He is economically cheap and takes wickets at a crucial time. Chahal has the experience and he can make good with Ashwin in the spinning department. Get the latest online betting Apps for IOS and Android.