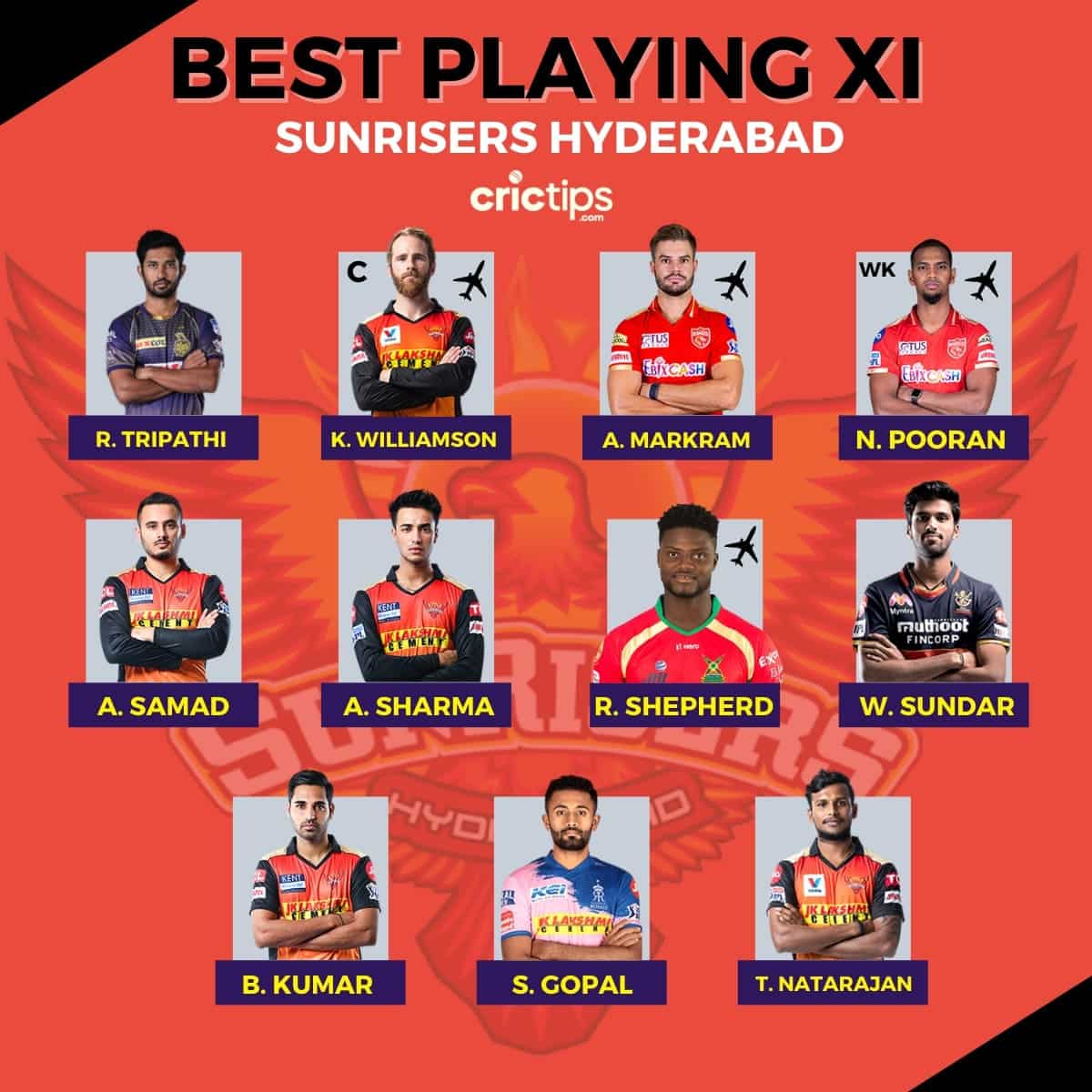 IPL 2022: Sunrisers Hyderabad was reported to have a plan in place for the IPL auction 2022. They began their auction at a snail’s pace. They didn’t even try to bid on any players during the first round of the auction. When they started bidding on the auction, however, none of the other teams could match them. They appeared to be the most supportive of their older players. Looking for Cricket session tips for free and Match predictions? Read more here on our site.

They followed up by re-signing Bhuvneshwar Kumar and T Natarajan, two of their previous pacers. Young guns Abhishek Sharma and Priyam Garg, who also represented the franchise, were bought back by them. During the auction, the Hyderabad franchise purchased a total of 20 players.

Nicholas Pooran was their most costly acquisition, with the franchise paying 10.75 CR for him. In the 2013 edition of the IPL, SRH made its debut in the cash-rich league. They’ve made the playoffs six times in the last nine seasons. Here’s a quick rundown of their best 11 ahead of the IPL 2022 season:

In previous seasons of the tournament, the flashy opening batsman from Maharashtra has produced some excellent performances. In the 2022 season, he is expected to bat first for the franchise. The youngster has been one of the tournament’s most underappreciated batters. He began his IPL career with the Rising Pune Supergiants, where he was mentored by MS Dhoni.

Kane Williamson is currently one of the best batsmen in the world. He is frequently compared to Virat Kohli, our own Indian superstar. One of the major advantages for SRH is having a batter of his ability in the lineup. He’s a superb fielder, a great batter, and his captaincy abilities are impeccable. Kane has been a part of SRH for a long time and has established himself as a valuable member of the team.

The elegant South African is well-known for its batting prowess. Last year, he was at the Punjab Kings camp and performed an excellent job for them. SRH will require a middle-order anchor who can drive the game forward while allowing the other batters to play around him. Markram is capable of completing this task for SRH. Aiden has been a member of the South African national team for a long time and has prior experience in this role.

In the mega auction, Nicholas Pooran was SRH’s most expensive seal. Pooran is a left-handed hitter from the Caribbean islands, who likes to attack. He is regarded as one of the best cricket ball strikers in the world. He, like the other West Indian stars, is famed for hitting big sixes. The players from the West Indies have a long history in the league. Chris Gayle, Kieron Pollard, and Dwayne Bravo have all been outstanding.

The franchise has placed a great deal of trust in this young talent. The team has decided to keep him for the 2022 season. He is one of the few young Indian batsmen capable of hitting cricket balls for huge maximums. Abdul has hit massive sixes off elite international bowlers such as Jasprit Bumrah, Kagiso Rabada, and Pat Cummins. Read more 10cric reviews here and learn how betting works online.

The multi-dimensional gameplay of the Punjab all-rounder has earned him significant praise from cricket gurus. He has only had a few appearances in the league, but he will undoubtedly see more time in the starting lineup this time. Three IPL franchises were bidding for him. The bidding war included Punjab Kings, Gujarat Titans, and Sunrisers Hyderabad, with SRH emerging victorious.

Romario Shephard, a Guyana-born all-rounder, is a versatile player. In the mega IPL auction for the 15th season, he was purchased by the Sunrisers for a record 7.75 crore rupees. The player has a natural talent to bowl fast, as well as a great height that gives him more bounce on any surface. Romario is also capable of scoring crucial quickfire runs down the order.

For the past few seasons, Wahington Sundar has been an important component for Royal Challengers Bangalore. He’s bowled well in both the powerplay and the middle overs. Washington Sundar has also performed admirably for India. He has been a part of some of India’s most recent international cricket successes. When RCB lost the bidding war for him during the auction, they were visibly disappointed.

For a few years, Bhuvneshwar Kumar hasn’t been the wing king we’ve known. He is regarded as one of the most successful bowlers in the IPL’s history. In the IPL, he is the only Indian bowler to win the purple cap twice. SRH has benefited greatly from his contributions over the years.

Following the departure of Rashid Khan, the franchise required a quality wrist-spinner to provide crucial breakthroughs in the middle-overs. They’ve decided to put their money into Shreyas Gopal. The Karnataka Spinner is a game that has been around for quite some time. He’s been playing IPL for a long time and has a lot of T20 cricket experience. In domestic events, he is a regular for Karnataka.

T Natarajan is a bowler who is noted for his toe-crushing yorkers. The bowler from Tamil Nadu made his major debut in the Tamil Nadu Premier League, where he was hurting batsmen for fun. Natarajan’s bowling abilities are exceptional, and he will be in charge of the death overs. Natarajan is a complete T20 pacer, with a level of expertise that is quite unusual. Here are some best betting apps for IOS and Android.