CRICTIPS EXCLUSIVE: Strongest Playing XI to Of RCB To Challenge for IPL 2022 Trophy 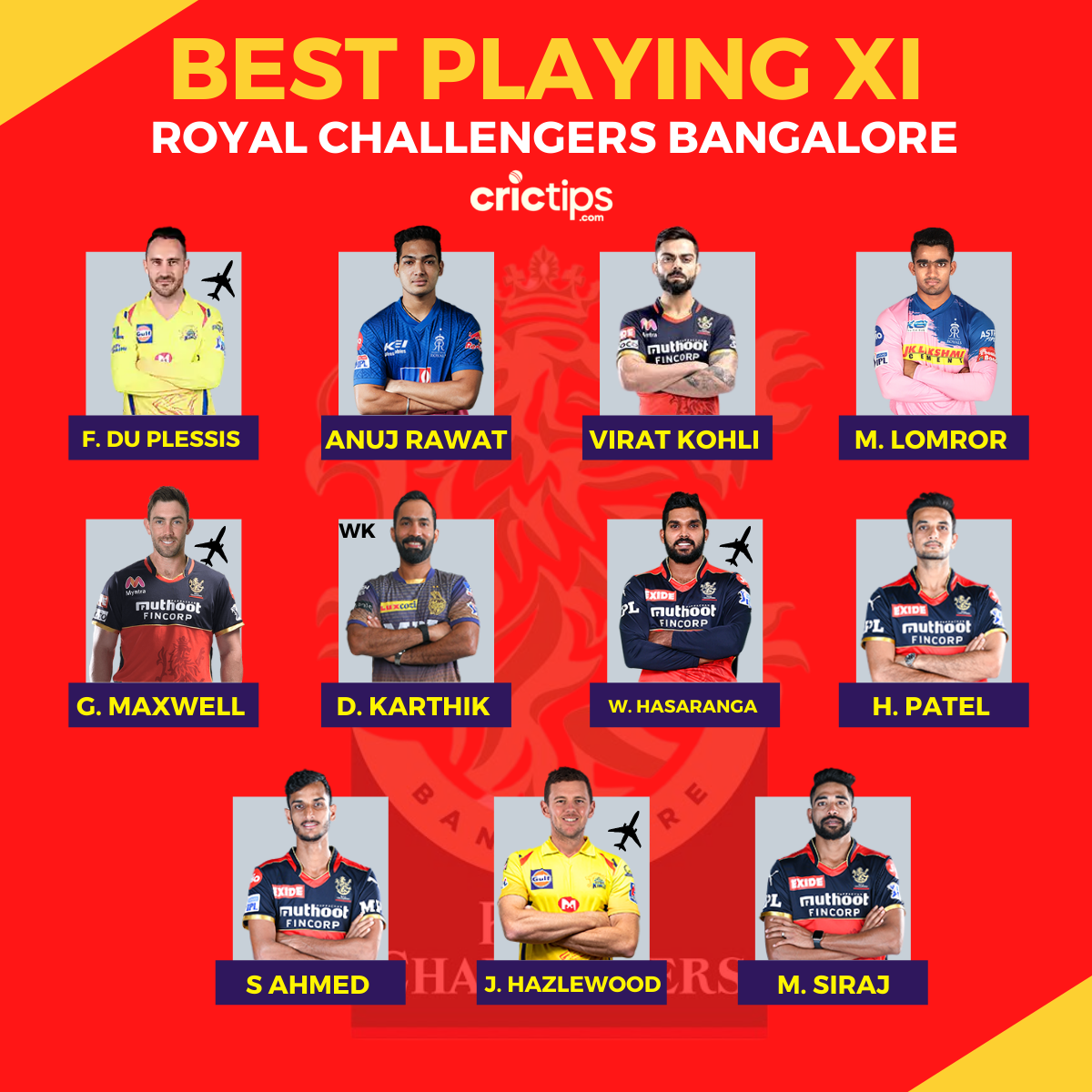 IPL 2022 is scheduled to start on 26th March with all league games taking place in Maharashtra. While the complete schedule isn’t out yet, some of the info is. RCB finds themselves in Group ‘B’, along with CSK, SRH, Punjab Kings, and Gujarat Titans. Along with their group members, RCB will contest Rajasthan Royals twice and the remaining sides once in the league stage. For more Cricket session tips for free and Match Predictions, read more here.

RCB’s batting unit isn’t great, however, they have a strong bowling attack. They also enjoy plenty of all-rounders with decent bench strength. Here, we take a look at RCB’s strongest XI for IPL 2022.

Faf has served CSK well, particularly in the last two seasons. Since 2020 in the IPL, he averages 42.3 with a strike rate of around 140. Faf has got the range to smash pacers and is a good fit for the anchor role. The South African batsman is a bankable option on good batting surfaces. RCB should support him with spin hitters. He is also likely to lead the Red Army this season.

The 22-year-old Anuj Rawat has batted in the IPL just once. Even though he can’t be relied on to deliver the returns, Anuj is a promising young talent. The left-handed batsman is a powerful batsman and will be useful against substandard bowling, especially spinners. Anuj, who is also a wicket-keeper, can form a complementary opening pair with Faf.

Virat Kohli hasn’t been at his best in the last two IPL seasons. His scoring rate has taken a hit, especially against spinners. The No. 3 position isn’t very suitable for him, as he is likely to face a lot of spin-bowling in that role. However, RCB don’t have many other choices unless they ask him to open with Faf, who has got similar skill sets. They can also try a risky move by demoting him to No. 5 to do pace-hitting given his range.

RCB should use Mahipal as a floating option to hit spinners in the middle overs. In his short IPL career of 10 innings, Lomror averages close to 28 with a strike rate of 138.75 against spinners. The southpaw is a powerful batsman and can smash the ball for long distances. Lomror can also bowl left-arm orthodox spin occasionally.

Glenn Maxwell had an amazing time in the last IPL season. He was comfortably among the top-three batsmen in IPL 2021 as he averaged 42.75 with a strike rate of 144. The Aussie was RCB’s best performer, particularly in the second half.

Maxwell’s most crucial contribution was his power-hitting against spinners and RCB would hope for some fireworks from him again. RCB should play Sherfane Rutherford for Maxwell given the latter will be unavailable for the first few games. Read 10cric reviews here and learn how online betting works.

Dinesh Karthik established himself as one of the best lower middle-order batsmen during 2017-2019 in T20 cricket. However, his batting returns dipped in the last two IPL seasons. DK is best suited for giving a finishing touch in the slog overs as he scores quickly against pacers because of the wide range of shots in his repertoire. If RCB time DK’s arrival at the crease perfectly, they will enjoy a bankable finisher.

Hasaranga, who is RCB’s lead spinner, will be quite crucial for the Challengers’chances in the upcoming IPL. While Hasaranga has been one of the most successful T20 bowlers in the past few years, his penetration at the big stage of the IPL remains to be seen. RCB can also ask him to put a low value on his wicket, and maintain the tempo in middle overs. If Hasaranga doesn’t look out of place in the IPL, it might be one of the better long-term investments in the league.

Shahbaz might not play a big role in RCB this year. The left-arm orthodox spinner will be RCB’s fifth bowler and will be also complemented by Maxwell and Lomror. Shahbaz is also unlikely to make significant contributions with the bat. However, he increases depth in both departments. RCB will use him according to matchups and in certain match situations.

Harshal Patel’s rise has been terrific in the last year. Averaging 14.34 with an economy of 8.14, he picked up 32 wickets in just 15 matches. The medium-pacer scalped 3 or more wickets on six occasions, including a five-wicket haul against Mumbai Indians. Harshal relies on his dipping slower balls and is a good fit on sluggish decks. He can also bowl yorkers, and he should keep fine-tuning his game to be an all-around bowling option.

Josh Hazlewood isn’t an established bowler in the IPL yet, but he is progressing steadily. He played 9 out of his 11 IPL matches in the last season. Hazlewood’s graph in T20 cricket in the past few years is on the rise and performing well in the best T20 league should enhance his reputation.

The tall pacer relies on bowling tight lines with accuracy and he adds value with the new ball and in the middle overs. Since Hazlewood won’t be available for the first few games, RCB should go with Jason Behrendorff in those matches.

Mohammed Siraj is gradually evolving into India’s second-best pacer across formats. Siraj, along with Hazlewood, will form a potent attack with the new ball. The right-arm pacer bowls with good energy and his deliveries skid off the deck after pitching. While he isn’t an out-and-out hit-the-deck bowler, Siraj can bowl sharp bouncers and also worked on his defensive bowling. Get the latest Online betting Apps for IOS and Android here.