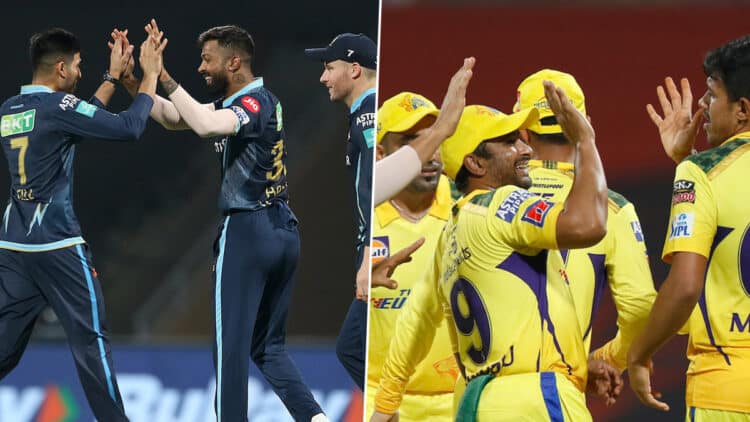 CSK vs GT Match Prediction: With only nine matches left for the playoffs, we haven’t got the top four for this season. Only Gujarat Titans have qualified for the next round. So, it is getting more intense with every match. Still, as many as seven teams that are in the race are battling for three playoff spots. The next fixture of the Indian Premier League will feature two teams with contrasting seasons.

This is a match between the qualified Gujarat Titans and the eliminated Chennai Super Kings. The game will kick off on Sunday at 3:30 pm at the Wankhede Stadium. Either way, winning or losing in this match will not affect much for both teams. But both will play to end the league stage on a high.

Gujarat Titans have already qualified for the next round and are sitting at the top. Apart from two back-to-back defeats against PBKS and MI, they haven’t done anything wrong in their debut season. They had a thumping win over Lucknow Super Giants in the last match and will look to win their remaining two games to carry on the momentum.

Despite the batting failure against LSG, the bowling stepped up to win them a game. The GT bowlers didn’t give the LSG batters a chance to breathe and bowled them out for just 82. Shubman Gill and Rashid Khan were the standout performers. Overall, they are confident and have beaten CSK earlier.

The four-time champions did have something left before they faced the Mumbai Indians in their last match. And with the loss against MI, all the hopes and belief ended, and now CSK became the second team to be disqualified. Nothing is left for them this season, but they must want to win their remaining two games for their loyal fans. Here are today’s cricket tips from our expert tipsters covering all cricket matches.

However, they ended up on the other side in their last meeting against GT. So they would like to settle that score as well. Despite the batting failure, the bowlers did create a few chances for them. That can be taken as a positive heading into this game. No one knows if MSD will continue next season as well, so there are possible chances that these two games might be his last games.

Both teams have played once only and that was earlier in the season. And it was Gujarat Titans who came out victorious in that match. The match ended in the final over of the game when David Miller chased down the target of 170 after a cameo from Rashid Khan. Speaking of the pitch, CSK played their last game here against MI.

CSK vs GT: Players to watch out for

Devon Conway had an unfortunate dismissal in the previous match against MI due to no use of DRS. He’s in the best shape of his life and has impressed everyone. Conway has had three consecutive half-centuries. So far, the CSK opener has scored 231 runs in five games, averaging 57.50 and striking at 154.00.

Mukesh Choudhary is at his best bowling in the power-play. Even in the losing cause against MI, he created a few chances for CSK and ended up with three wickets. Mukesh has taken 16 wickets so far in his debut season. Want to bet on cricket on the move? Discover India’s best betting apps here on our site.

Shubman Gill has provided GT with a solid start more often than not. And it was his knock of 63 that helped GT to win the last match. He has already scored four half-centuries and is the leading run-scorer for the team. The right-hander has scored 384 runs at an average of 34.90.

Rashid Khan did struggle to take wickets in the first half of the tournament. But now he is making the ball talk and is among the wickets. It was his four wickets that restricted LSG in the last match and helped GT to win. Rashid has taken a total of 15 wickets at an economy rate of 6.79.

With both teams knowing about their situation in the tournament, it will be the right opportunity to test their bench. But with CSK, they would like to finish on a high note. So we will back Chennai Super Kings to win this match no. 62 against Gujarat Titans.