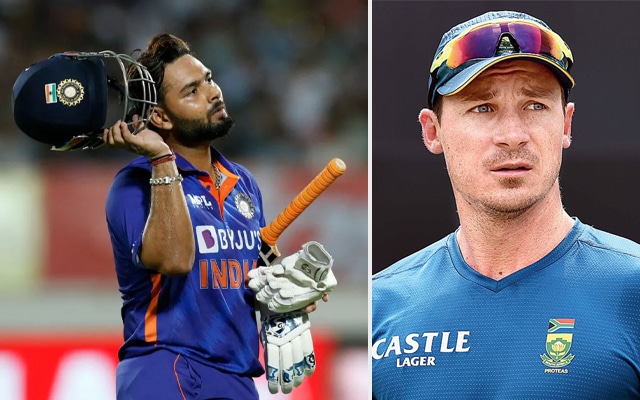 Rishabh Pant has proved his worth in the test team but when it comes to the limited-overs format he has a long way to go. His form has been below average in T20s but recently in the England series he registered his maiden ODI century. Despite this, he still hasn’t fixed his spot in the ODI team. Moreover, with so many competitors from Sanju Samson to Ishan Kishan, he will have to fight his way through.

Ishan Kishan’s recent 93 runs knock versus South Africa has immensely impressed Dale Steyn and he has warned Rishabh Pant to beware of his spot. Steyn suggested it was the final moment Ishan Kishan earned a fair string in India’s ODI lineup while narrating an interesting account of the younger player’s initial IPL days. Appreciating the batting of the “baby”, Steyn discussed that the wicket-keeper batsman has an ability to understand the bowler he wants to play big shots for. He also called him a great player and a great guy.

“For a short and small man, he packs an incredible punch. These sixes odd Nortje aren’t small. They’re pure timing and muscle. And just the ability to recognize when to take on the bowler. He is a great player and guy in that Indian team… Rishabh Pant should be worried that someone is coming for his spot,” Steyn said.

Dale Steyn comes with a warning for Rishabh Pant

Team India’s primary team consisting of KL, Rohit Sharma, Rishabh Pant, Virat Kohli and others were not a part of this series. The team is practising in Australia in an attempt to reclaim the T20 World Cup trophy once more. The Shikhar Dhawan-led team saw Sanju Samson as well as Shreyas Iyer deliver some magnificent performances for the team. Mohammad Siraj was called back as a substitute but his wicket-taking ability in the early overs proved to be helpful in India’s win.

Deepak Chahar who was the contender to replace Jasprit Bumrah suffered an injury too. Washington Sundar was named his replacement. Mohammad Shami will join India’s squad in place of Jasprit Bumrah while Shreyas Iyer and Shardul Thakur will be in reserves for the upcoming T20 World Cup. The rest of the players will participate in the Syed Mushtaq Ali Trophy.