Dinesh Karthik Shares His Practice Details After The Match vs Aus 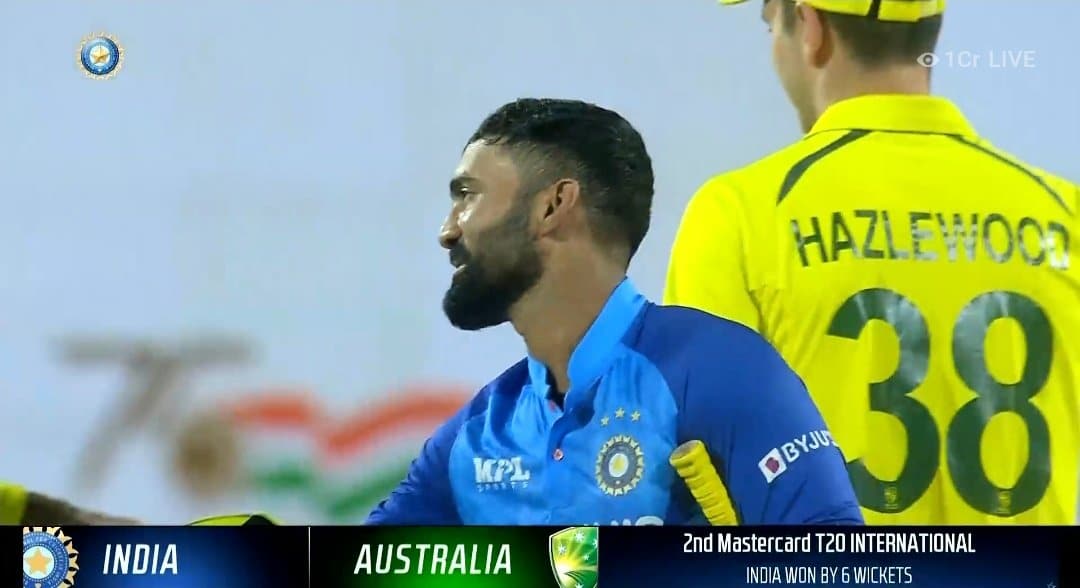 Team India has levelled the 3-match T20I series with Australia after Dinesh Karthik wins the game for India. The second match between the two sides saw reduced overs due to the wet outfield. Both sides were given an 8-over game with 2 overs of powerplay. Indian team saw the comeback of Jasprit Bumrah and Rishabh Pant in place of Umesh Yadav and Bhuvneshwar Kumar. Looking for India’s top betting sites? Check out live cricket odds and bet on live cricket games with our amazing betting bonuses!

The Finch-led team was put to bat first and scored 90 runs in 8 overs. Once again it was Mathew Wade who came to rescue for his team. The Australian batter scored 43 runs off 20 balls with a strike rate of 214. Bumrah dismissed Finch with a brilliant yorker and Axar Patel was unplayable to the visitors. Patel in his 2 overs not only had 2 wickets but was also the most economical bowler.

Rohit Sharma played a captain’s knock that built the foundation for the team’s win. Suryakumar Yadav and Hardik Pandya couldn’t do much but it was Dinesh Karthik who hit the winning runs. After having a dream IPL season with RCB, Dinesh Karthik received lots of praise and was given the title of ‘finisher’. The management and the coaching staff were clear on what role they expected from the veteran.

Dinesh Karthik finishes off in style

True to the title, Dinesh Karthik came to bat in the last over. India needed 9 runs from the last 6 balls but it was nothing but a cakewalk for Karthik. The veteran wicket-keeper batsman kept his calm and hit the first ball for 6 over backward square leg. The next ball from Sams was a shorter one which was pulled away for 4 and marked the end of a highly entertaining game.

After the end of the match, Dinesh Karthik attended the press conference. He said, “Look, I think over a period of time I’ve been practising for this. I’ve been doing it for RCB (Royal Challengers Bangalore) now, and I’m happy doing it here. So it’s a consistent routine over a period of time, the kind of, you know, when I get off time, I do a lot of scenario practices. You know Vikram (Rathour) and Rahul (Dravid) have also been accommodating to how I want to practice. What are the kind of shots I want to practice, I’ve been very specific with it. I don’t practice too much, but I try and keep it as specific as possible. Stay tuned for our 100% FREE cricket tips and match guides from our professional betting tipsters.