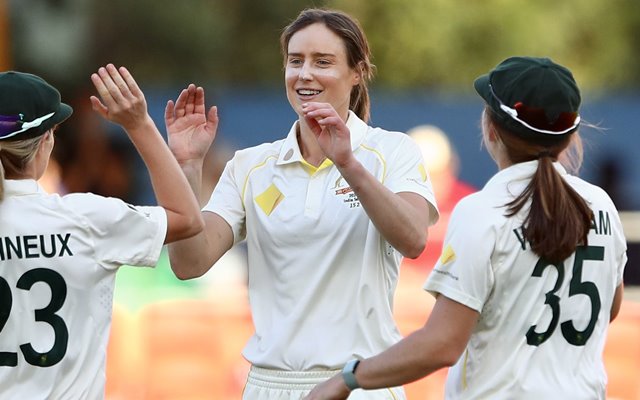 Star Australia all-rounder Ellyse Perry has become the first women cricketer to achieve a double of 300 wickets and 5000 runs in internatinal cricket. Perry achieved the feat after dismissing Pooja Vastrakar in the 143rd over of the Day-Night Test against India in Queensland.  Know the truth and review about 10cric. Is 10cric legal in India.

Meanwhile, India women are in a commanding position in their Day-Night Test. Led by Smriti Mandhana’s magnificent 127, India posted 377 -8 in their first inning. Along with Mandhana, almost every other batter chipped in with some vital contributions, with Deepti Sharma being the second-highest run-scorer of the inning with 66 runs.

Australian bowlers had to toil hard. Perry was the pick of the bowlers and scalped two wickets for 76 runs. Stella Campbell, Sophie Molineux also picked up a couple of wickets. Given where the match stands, it is safe to say that India have reached a position from where they can’t lose the match but they won’t be satisfied with a draw and would want to end up on a winning side. Here’s quick guide of best cricket betting sites in india.