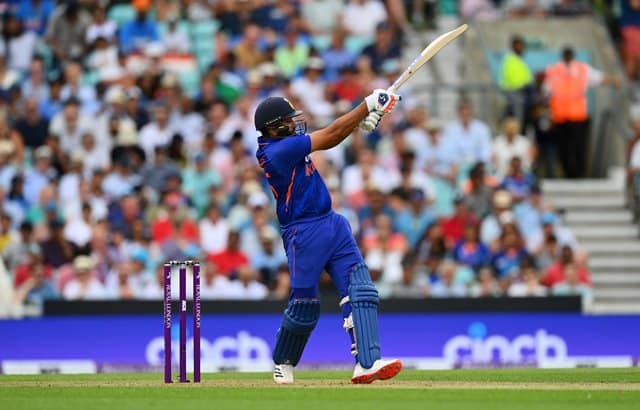 ENG VS IND: Pakistan’s swashbuckling opener Imam-ul-Haq seems to be a huge fan of India captain Rohit Sharma. The youngster feels that the current Indian skipper is more gifted a batter than the former India captain, Virat Kohli.

Are you looking for legal betting sites in India on the go? If yes, read more here.

In an exclusive interview, he said to Samaa News, “Dekhiye mujhe eisa lagta hai jo talent allah ne Rohit Sharma ko di hai wo shayad Virat Kohli ko nahi diya (See I feel that the talent which God has given Rohit Sharma, he has not given the same to Virat Kohli).”

“I have watched both Rohit and Virat bat but I think Allah has given a lot of time to Rohit. He is such a player who can completely change the game. Once he becomes set, he hits according to his own whims and fancies. I wish to be like him. But I don’t compare with anyone,” he further added.

ENG VS IND: Rohit Sharma is currently leading India in the three-match ODI series vs England

Meanwhile, Imam-ul-Haq has been in sublime form recently and was moved to the second spot in the ICC ODI Rankings last month, which was also his career best. However, the 26-year-old placed above both Virat Kohli (3rd) and Rohit Sharma (4th) in the rankings and is only second to his Pakistan captain, Babar Azam as well.

On the other hand, Rohit Sharma is currently leading Team India in the three-match ODI series in England that is level at 1-1 with the final match taking place on Sunday, July 17. The veteran was handed over the full-time white ball captaincy duty for India in 2021 and given the Test captaincy after former captain Virat Kohli decided to step down from his role after the Test series in South Africa earlier this year as well.

Here you will find more LIVE Cricket Predictions and analyses on the upcoming cricket matches that are being played around the globe.

Meanwhile, the cricketing world is currently divided by Virat Kohli’s lean patch. While many backed him, former India captain Kapil Dev believes he can be dropped if he fails to perform. On the other hand, former England player Monty Panesar has also commented on Kohli’s form. He also opened up on Kohli’s sledging in the rescheduled fifth and final Test at Edgbaston and stated that he was under pressure. However, it will be interesting to see how Kohli manages to keep his place intact in the playing XI considering the bench strength India have right now as well.