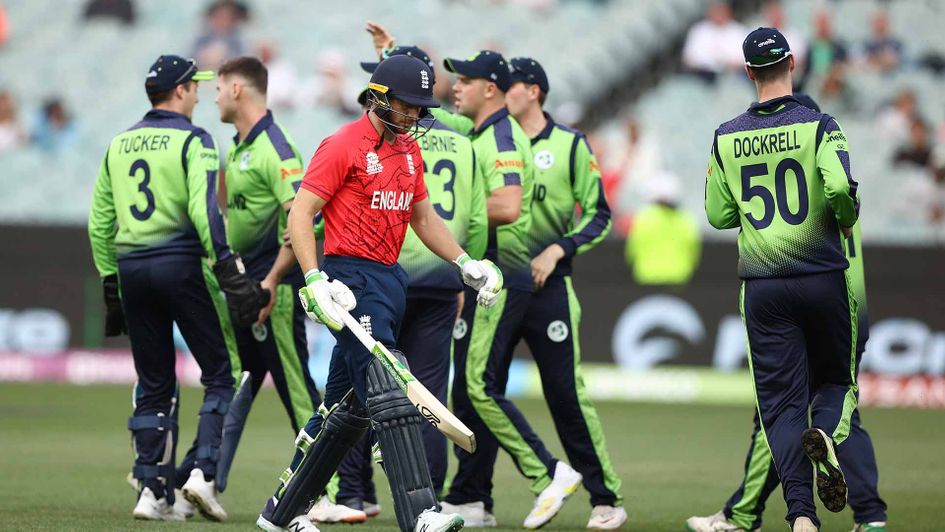 The sudden heavy downpours in Australia have created an unnecessary mess affecting the ongoing T20 World Cup. While some may be upset over it, the Irish team is the happy one. The Eng vs Ire game saw Ireland defeat England by 5 runs thanks to the D/L method. Before the game stopped because of the rain, England was 5 runs short in the designated over and eventually lost the game. This is only the third time in the history of the Eng vs Ire clash, England has faced a loss.

The Irish team looked solid at a point with 102/1 with Andrew Balbirnie’s fantastic half-century. Unfortunately, they couldn’t keep up with the runs and then the wickets fell too quickly too soon. England started the chase poorly by losing the captain Jos Buttler on the second delivery of the innings and then were 67-4. Moeen Ali and Liam Livingstone slowly grasped the chase to secure those important 2 points but the attempt was slow.

The English wanted a rapid restart of play. Especially, because of a premature game halt that wasted the match 18 minutes. After the Eng vs Ire game, Jos Buttler said, “I think we should let it hurt, to be honest. I think days like today are really, really disappointing, and you’ve got to feel that. There’s no point in saying let’s sweep it under the carpet and move on. I think we’ve got to reflect we’ve got to do it quickly obviously with a game soon after, but today should hurt.”

Amidst Moeen’s brief appearance, the Irish team were mindful of the circumstances of the game and made nuanced attempts to slow down the clock when the final shower began. However, Buttler looked hesitant, even though it drew his attention he did not say anything about it. The results of the Eng vs Ire game will now force both England and Australia on Friday to play an almost knock-out game for survival in the competition.

England isn’t the only team that has suffered the consequence of rain. The South Africa versus Zimbabwe game that was abandoned because of the same reason will play a do-or-die game against Bangladesh. Afghanistan’s chances of going forward in the T20 World Cup is negligible and New Zealand on the other side are almost sure to reach the semi-finals.