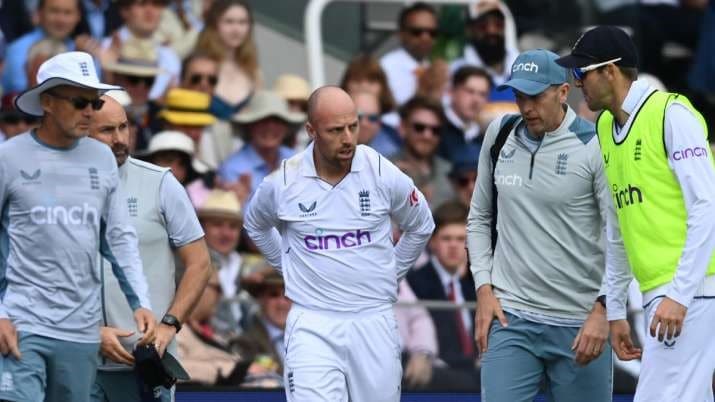 ENG vs NZ: England spinner Jack Leach has been ruled out of the first Test against New Zealand at Lord’s due to concussion symptoms. Leach was injured while attempting to stop a boundary in the sixth over of the day. He dashed from the backward point, chasing the ball, but landed badly on his head. Leach was clearly in pain, and the physio was quick to respond. Leach was playing his first home game since 2019. If you are searching for the best betting sites in India, you are in the ideal place

England has named Matthew Parkinson as his replacement. The 25-year-old became the first concussion substitute for England in the Tests. Parkison was playing for Lancashire in the T20 blast the day before. He will now move from Manchester and join the team later on Thursday.

ENG vs NZ: England is off to a rollicking start with the red duke

Meanwhile talking about the match, England are all over New Zealand, having reduced the Kiwis to 86/8. James Anderson and Matthew Potts took seven wickets, while Stuart Broad took 1 wicket after conceding 41 runs. Anderson started the wickets precession when he dismissed Will Young. The wily old customer pitched the ball up, made it swing away, and gave a low to catch to Jonny Bairstow, who was stationed at third slip. The highlight of the wicket was Bairstow’s quick reaction, getting down, and completing a rather freakish low catch. Download one of the best betting apps with a user-friendly design, and plenty of payment options, and enjoy all features and bonuses here on our site.

Matthew Potts is having a dream debut

When you dismiss Kane Williamson in the first over of your debut match, you are having a fairy tale debut. Potts entered the attack against New Zealand in the 10th over, pitched the ball up to Kane Williamson, induced the edge, and sent the Kiwi skipper packing. He later came back to take Daryll Mitchell and Tom Blundell in quick succession.

England skipper and fellow county mate Ben Stokes lavished huge praise on Potts ahead of his England debut. “This kid is ready for Test cricket,” said Stokes after Potts ran through Glamorgan to set up a thrilling for Durham in the county championships.

“He turned up on Day 4 with a bit of a stiff side, and some in his situation, with test selection coming round the corner and bowling as well as he has, could have just sat down and said – No, I’m going to look after myself. But he didn’t. He ran in and won the game for Durham. That’s the attitude that sets you up for the next level,”

Potts has worked his way up the Durham ranks, one rung at a time. He was a member of England’s U-19 team and made his first-class debut against Kent. Potts has taken 77 wickets in 24 FC matches at an economy of 2.91 and a strike rate of 55.3. He has four five-wicket hauls to his credit. He is no slouch with the bat either having accumulated 447 runs across 24 matches, with two fifties to his name.