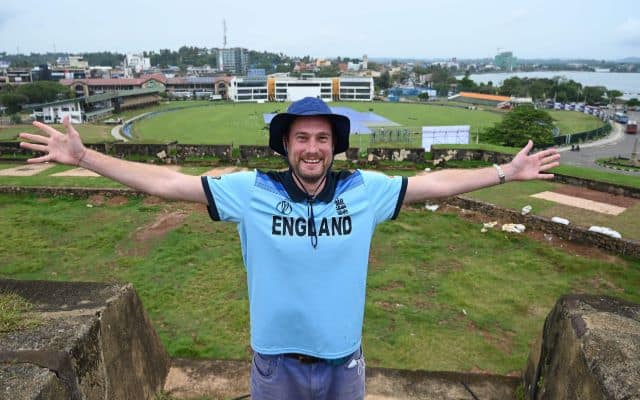 Cricket is more than just a game to many people across the world. And, fans even go to extreme lengths just to make sure that they can catch a glimpse of their favorite cricketers. England’s tour of Sri Lanka should have originally started last year, in the month of March. But then, the coronavirus pandemic wreaked havoc and the series was postponed. Check this 1xbet mobile app of how it works.

Finally, the two sides started their two-match Test series on 14th January 2021. And, an ardent England cricket fan named Rob Lewis had waited for the entire duration of 10 months just to get inside the stadium and catch a glimpse of the first Test between England and Sri Lanka. But his plans were shattered as the police sent him away from the ground.

Lewis was extremely frustrated and added that the police had kicked him out despite him waiting for 10 long months. But then, the fan consoled himself by stating that he was at least able to sing the National Anthem of England.

“I am very frustrated. I waited 10 months to watch this match and the police have kicked me out. At least I managed to sing ‘Jerusalem’,” said Lewis as quoted by NDTV.

Lewis also added that he got just 30 minutes to put up three banners. But the fan is still hopeful that with 9 more days left, he will be given permission to watch the game. Take a look this cricket ipl betting tips and tricks, it’s free from us.

“They gave me half-an-hour to put up three banners and go. That’s all. There will be another nine days of play and I hope I will be able to get permission to go up there again,” added Lewis.

Meanwhile, the first Test has gone England’s way thus far. After bundling out the hosts for just 135, England ended Day one at a commanding 127/2, with skipper Joe Root leading the way with an unbeaten 66.