Glenn Maxwell tries to troll James Neesham; gets a hilarious response from the Kiwi all-rounder 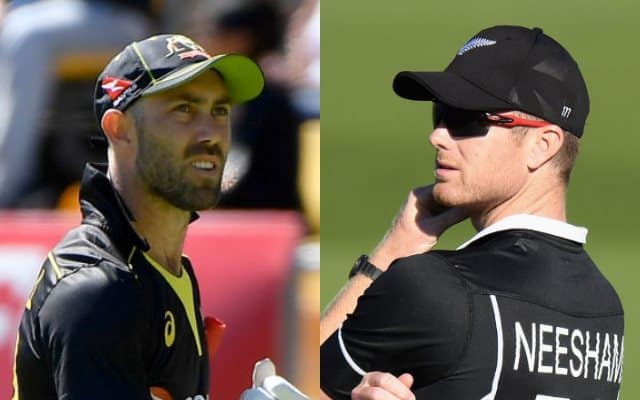 Cricket fans were treated to some cheeky banter between James Neesham and Glenn Maxwell on Twitter. It all started when a fan asked Neesham about his IPL status. The Kiwi all-rounder, who’s known for his witty character, sarcastically reverted that he’s on his way but is stuck behind a Cargo ship. Neesham was referring to the famous ‘Evergreen cargo ship’ that made headlines after getting stuck on the shores of Suez Canal. Check how parimatch bonus code work.

Taking a funny jibe at Neesham, Australian all-rounder, Glenn Maxwell joined the party and reverted with a tweet that read “Must be hard carrying bags that are 46,44,46” . Maxwell was pointing out to the 3rd T20I between New Zealand and Australia where Maxwell smashed the Kiwi all-rounder for 4,6,4,4,4, 6 off six deliveries.

However, Neesham was never going to back down and replied Maxwell with a picture of the New Zealand team after their 3-2 win over Australia recently. He captioned the image as “ Haha nah you get used to lifting stuff after a while”

Haha nah you get used to lifting stuff after a while 😉 https://t.co/bTlzpwIpqT pic.twitter.com/fOO0YmoP87

Neesham had a miserable series against Australia and was taken to cleaners by the Australian batsmen. The all-rounder gave runs at an economy of 13.17. However, the hosts won the series 3-2. They were leading the series 2-0 before Australia bounced back to win the next two games. New Zealand then clinched the final T20I to win the series. Despite his mediocre performance, Neesham played a crucial role in New Zealand’s victory in the 2nd T20I. The all-rounder defended 14 runs in the final over to hand New Zealand an impressive victory. Check cricket betting tips free for today’s match. We predict upcoming matches.

Neesham is part of the Mumbai Indians squad in the 2021 edition of the IPL and will be hoping to better his record in the T20 extravaganza where he averages 12.2 with the bat and has an economy of 9.95, picking up just three wickets in 9 games.