GT vs PBKS: Livingstone Smokes Shami for the Biggest Six of IPL 2022, WATCH 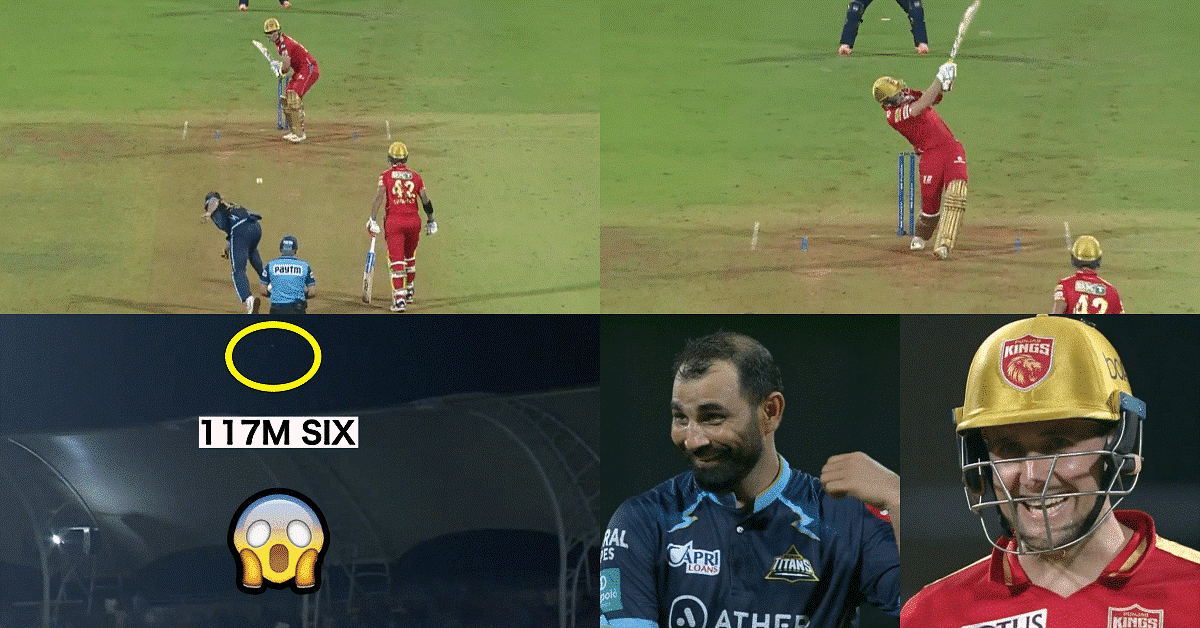 GT vs PBKS: Liam Livingstone is one of the finest strikers of the cricket ball in the modern era. The English T20 specialist came into the IPL with a great reputation. The price tag of a whopping INR 11.25 crore reflects the same. In fact, Livingstone became the highest-paid overseas cricket in the 2022 mega-auction. Experts slammed PBKS for acquiring the services of Livingstone who has blown hot and cold in the IPL.

However, Livingstone has silenced all the critics with his superb display in the tourney so far. The 28-year-old is the second-highest run-getter for PBKS with 293 runs under his kitty. He has accumulated those runs with a strike rate of 186.62, the highest among batters who have scored a min of 250 runs. Livingstone continued on his merry way and lit up DY Patil Stadium with his exuberant strokeplay in the win against Gujarat Titans (GT).

GT vs PBKS: Livingstone powered PBKS to victory with a 30-run cameo of just 10 balls, including a jaw-dropping 117m six. PBKS required another 28 runs from the final five overs when Livingstone arrived at the crease. He took 4 balls to get his eye in and carted Mohammed Shami for 28 runs, including 3 sixes and 2 fours to finish the game with 24 balls to spare and get an NRR boosting run rate. Read our guide and free betting tips, written by cricket betting experts, to find the right betting app for your situation.

Livingstone just cleared his front leg and whapped the ball with his brute force on the very first delivery of Shami. It was a full ball angled in towards Livingstone. The ball sailed to the upper deck of the DY Patil Stadium leaving the commentators gasping for breath. The ball travelled so far that Kevin Petersen shouted ‘o my word’ on air. It was the biggest six of IPL 2022 so far. Livingstone who earlier hit a 112m six in the tourney, broke his own record by 5m.

Earlier in the day, GT skipper Hardik Pandya won the toss and decided to bat first. They could manage on 143/8 in the allotted 20 overs. For the 1st time this season, GT lost both the openers inside the powerplay. GT’s innings went from bad to worse when Hardik Pandya was sent packing for just 1 run. GT couldn’t recover from there and lost wickets at crucial junctures. However, a fighting knock from Sai Sudarshan propelled GT to a respectable total. Kagiso Rabada was the pick of the bowlers for PBKS with a four-wicket haul.

PBKS didn’t have the ideal start as they lost Jonny Bairstow for just six. Then the impressive Bhanuka Rajapaksa joined hands with Shikhar Dhawan to put together an 87-run stand for the second wicket. Rajapaksa was dismissed in the 12th over after scoring 40 of 28 balls. Dhawan bought up his 47th IPL fifty and remained unbeaten at 62. The win takes PBKS to 5th in the points table.

Read Mobile Bet365 reviews and learn more about how this app works for betting online.