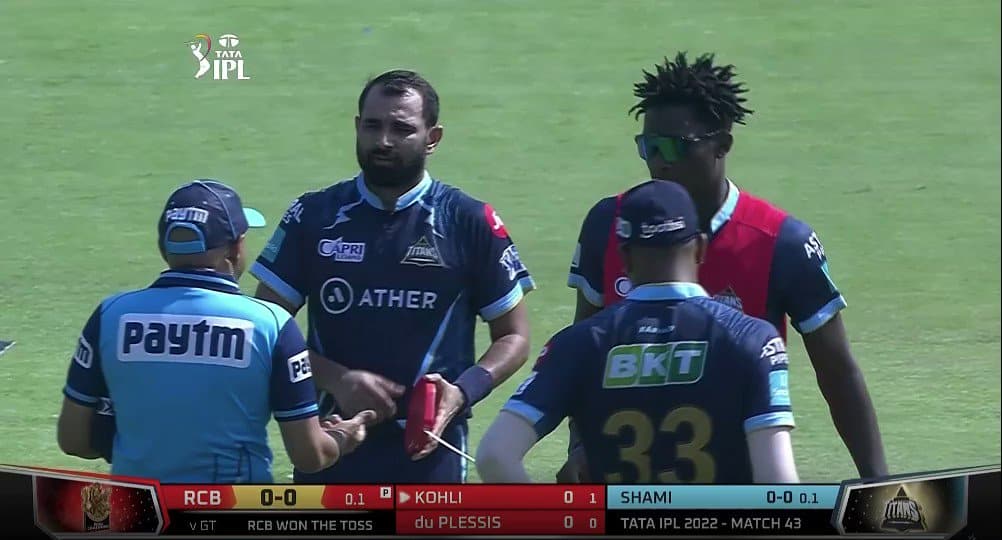 GT vs RCB LIVE: With the commencement of the second half of the 2022 edition of the Indian Premier League, the race to the playoff has gotten intense. Royal Challengers Bangalore are fighting a battle with Gujarat Titans in a must-win game at the Brabourne Stadium in Mumbai. Get more Cricket session tips for free and match predictions for the 2022 season here on our site.

The match commenced with RCB skipper Faf du Plessis winning the toss and making the unorthodox choice of batting first. Notably, RCB has made just one change in their line-up from the last time.

The Bangalore outfit decided to test Mahipal Lomror in the middle by dropping Suyash Prabhudessai. Gujarat Titans, on the other hand, made two changes by including Sai Sudarshan and Pradeep Sangwan. Both Yash Dayal and Abhinav Manohar were dropped due to injuries.

As the much-hyped match commenced, the fans were greeted with some drama on the 22-yard pitch. For the first over, Hardik Pandya trusted his ace seamer Mohammed Shami to bowl to Virat Kohli and Faf du Plessis.

Shami bowled a full-length delivery to Kohli and the latter defended it towards the mid-off. This was followed by the seamer taking a couple of false starts to get a good run-up. After a few failed attempts, Shami decided to mark his run-up and called for the measuring tape from his dugout.

It was certainly a time-taking process and the on-field umpire didn’t seem much happy about it. The umpire went to the seamer to have a discussion regarding the same and was joined by GT skipper Hardik Pandya. Read more about Mobile Bet365 here and learn how this app works for online betting.

After an animated conversation, Shami finally marked his run-up again and got back to his job of completing the first over. The seamer didn’t enjoy a good start to his campaign in the game as he was hit for two consecutive boundaries by Virat Kohli.

Mohammed Shami proved to be a little expensive with the ball against Royal Challengers Bangalore. The seamer gave away 39 runs in his four overs while bowling at an economy rate of 9.8. However, he redeemed himself by picking a crucial wicket of RCB’s opening batter Virat Kohli.

In the end of 20 overs, RCB managed to get 170 runs on the scoreboard. Virat emerged as the hero of the first innings as he finally got back to form. After a series of low scores, the former Indian skipper flaunted his class with the bat by smashing a half-century.

Kohli added 58 runs to the scoreboard off 53 balls with the help of six boundaries and one maximum. Apart from Kohli, Rajat Patidar also did well by hammering 52 runs off 32 balls. Looking for more Cricket betting tips for free and match guides from the experts? Read here.