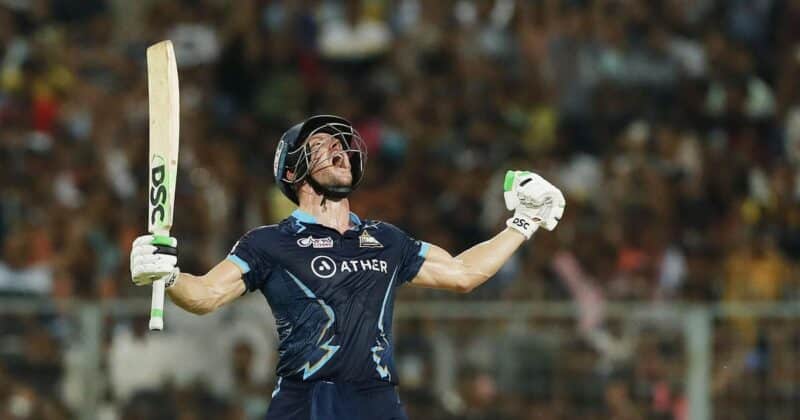 GT vs RR Qualifier 1: Gujarat Titans’ dream run continues in their maiden season. The Ahmedabad-based side beat Rajasthan Royals (RR) by 7 wickets to enter their maiden final. While several players contributed to the Titans’ win, David Miller was the standout performer. Miller powered GT to the IPL 2022 final with a stellar knock of 68* (38).

The Men in Pink posted a formidable 188/6 on the back of a Jos Buttler special. However, the GT batters put on a solid show despite losing Wriddhiman Saha for a duck. Shubman Gill and Matthew Wade put on a 72-run stand for the second wicket. But GT were in a spot of bother after losing both the well-settled batsman.

Miller came at number 5 and took some time to get his eye in before going berserk. The South African batter took RR’s best bowlers Yuzvendra Chahal and Trent Boult to the cleaners. With the equation coming down to 16 of the final over, he smashed Prasidh Krishna for three consecutive sixes to seal the Titans’ victory.

After the match, Miller took to Twitter and apologized for demolishing his former franchise. The tweet soon went viral garnering 89K likes as we write and 4,474 retweets. Miller was notably associated with the Royals in 2020 and 2021 but spent the majority of his time warming the benches. Unsurprisingly, he was released by the franchise prior to this year’s mega auction, and Titans roped the Proteas star for INR 3 crore. See more cricket betting odds and scheduled matches for the upcoming season here on our site

It is very fitting that Miller hit the winning runs for the Titans. The 33-year-old has been a revelation for GT and has played the role of a finisher to perfection. Miller has accumulated 449 runs at an average and strike rate of 64.14 and 141.19 respectively. However, his death over strike rate is a more telling statistic of his power. Miller has scored 159 runs at the death with a strike rate of 172.82, the third-best in terms of accumulation of runs in the slog overs.

“I feel extremely backed from the outset,” Miller credits GT for his success

After the game, Miller admitted that having consistent opportunities has helped him put on such a strong performance this season.

“I think opportunity, firstly (what’s changed?). I’ve been given a role, I felt extremely backed from the outset. My personal game – I’m enjoying my role, I’ve been playing for many years now,”

“Understanding my game a lot better. In high-pressure situations, you tend to go away from your gameplan but I feel like I’m trying to keep everything together close to the gameplan,”

Miller has never been part of a winning IPL team. He got close in 2014 with Kings XI Punjab now Punjab Kings (PBKS) but fell short by a whisker against Kolkata Knight Riders (KKR). 8 years later, Miller has the opportunity to lift the coveted trophy on the Titans’ home ground.

Read Melbet Reviews here and learn about how this app works for online betting.