Home » News » IND VS NZ: 3 Players That Can be Crucial For Indian Team for 3rd ODI Match

IND VS NZ: 3 Players That Can be Crucial For Indian Team for 3rd ODI Match 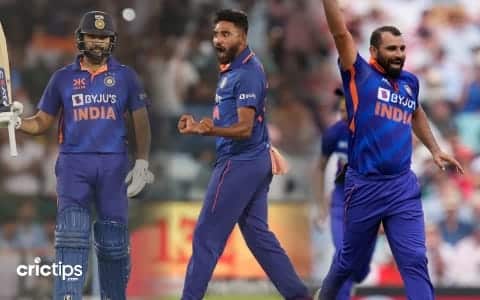 The blackcaps faced an embarrassing defeat in second Ind vs NZ ODI. It was anticipated that after nearly pulling off the victory in the first game, a similar performance will be replicated in the second one too. However, India’s bowling line-up got the better of the New Zealand side. Chasing the target of 109 runs, Indian Team captain Rohit Sharma scored a half-century helping his team seal the series.

After Mohammad Siraj’s fantastic performance in first Ind vs NZ ODI, Shami troubled the batsmen in the second one. Washington Sundar and Hardik Pandya also had 2 wickets to their name. Before the senior players leave the side ahead of Ind vs NZ T20, the men in blue will be keen to whitewash the visitors. The final game is scheduled to be played at Indore on Tuesday.

Ever since recovering from the injury that occurred during the Bangladesh ODI, the Indian captain has looked good. In 3 matches in Ind vs SL series he was able to provide India with the accelerating start that was needed. Similarly, in the two Ind vs NZ games, he scored 34 runs, and in the second one with 51 runs, he was the highest run-scorer of the day. It is only a matter of time before the Indian team captain Rohit Sharma reaches a 3-figure score soon.

While Siraj might have picked up just one wicket in the previous game for the Indian team, one cannot ignore the fact that he has emerged as one of India’s best bowlers. It was because of him that even in absence of Jasprit Bumrah, the fast bowling department looks ready and lethal to face any challenges.

The veteran fast bowler from Indian Team turned out to be a nightmare for New Zealand players in the second Ind vs NZ ODI. Mohammad Shami registered a match-winning figure of 3 wickets for 18 runs in 6 overs including a maiden. Given the form he is in, he could help India whitewash New Zealand 3-0.