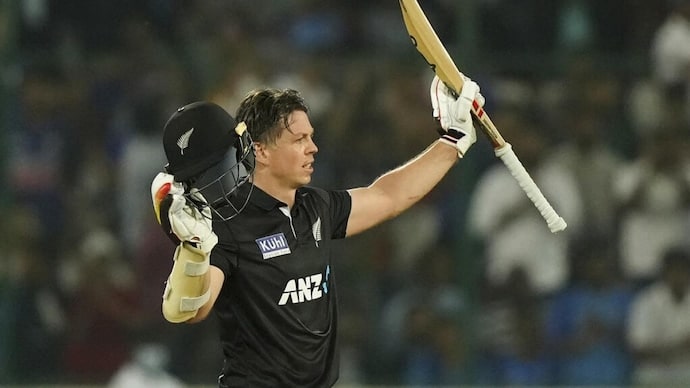 India might have won the first match of the Ind vs NZ ODI series thanks to Mohammad Siraj and Shubman Gill. However, it was Michael Bracewell that had everyone’s attention. While the blackcaps were struggling to establish partnerships, the number 7 batsman, Michael Bracewell stood tall like a rock. The Indians had their heart in their mouths when Bracewell was batting. The player might have not been able to win the game for New Zealand but he definitely earned respect.

During the first innings of the Ind vs NZ game, Shubman Gill stunned everyone with his double-century. The men in blue gave 350 runs target to the blackcaps. It was only Michael Bracewell and Michael Santner who were able to keep the game going. Bracewell’s 140 runs helped the team reduce the loss margin and they were all out with just 12 runs remaining. Akash Chopra spoke about Bracewell in his review of the Ind vs NZ game that he uploaded to YouTube.

“In my memory, I have not seen an innings of this quality at No. 7 in which Michael Bracewell scored 140 runs off 78 balls. He was absolutely sensational, smashing. When Tom Latham was out at the score of 131, I felt it was game, set, and match, because you can’t stage a comeback from there. The Hyderabad ground is not small but he was hitting sixes on the second tier. He hit 10 sixes and 12 fours. Mitchell Santner was there with him but Michael Bracewell. He bowls off-spin, he didn’t get a wicket in this match, but batting – what a player, he is an absolute gun,” he said.

India is on a winning streak lately. They’ve won the last 3 series they’ve played which include test vs Bangladesh and ODI, T20 vs Sri Lanka. In the current Ind vs NZ series, the team will miss Shreyas Iyer. The men in blue are awaiting one good knock from the Indian captain Rohit Sharma. Suryakumar Yadav will also have a good opportunity to replicate his T20 form in ODIs. The next game between the two sides is on Saturday, January 21 at Raipur.