Home » News » IND vs SL : Deepak Chahar Will Not Play T20Is Against Sri Lanka Due to Hamstring Injury

IND vs SL : Deepak Chahar Will Not Play T20Is Against Sri Lanka Due to Hamstring Injury 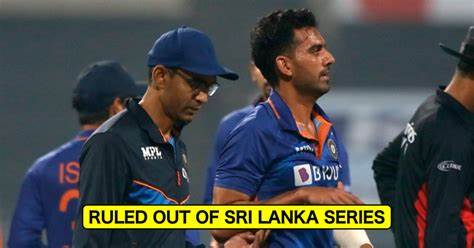 IND vs SL : India pacer Deepak Chahar will not be a part of the upcoming T20 International series against Sri Lanka. Due to his hamstring injury he will unavailable. The in-form bowler had suffered the injury during the third T20 International against West Indies in Kolkata on Sunday. A BCCI official said that they ruled out him from the series. And he will complete his rehab at NCA.

Find here some best Expert Betting Tips for the 2022 Season.

It remains a matter of concern that could Chahar will become fit for the IPL. Everyone is expecting it may begin from the last week of March. “The team has sought no replacement as vice-captain Jasprit Bumrah is already in the side,” the official added. The T20 International series against Sri Lanka begins in Lucknow on Thursday.

After clinching the T20I series against West Indies now Sri Lanka is coming to India. Team India will now look to carry their form into the three-match series against Sri Lanka, beginning Thursday. India and Sri Lanka will square off in three T20Is and two Tests. With the first match of the series to be played in Lucknow on Thursday.

“Deepak sustained a right quadriceps injury during bowling while Suryakumar suffered a hairline fracture during a fielding attempt in the third and final T20I against the West Indies in Kolkata on Sunday (February 20). They will now head to the National Cricket Academy in Bengaluru for further management of their injuries,”

There will three-match T20I series against Sri Lanka. In Shri Atal Bihari Vajpayee Ekana Cricket Stadium in Lucknow the opening match will occur on February 24. The remaining two games will held at HPCA Stadium in Dharamshala on February 26 and 27, respectively. Batter Suryakumar Yadav will also not be a a part of the team.

Suryakumar Yadav suffered a hairline fracture during a fielding attempt. In the third and final T20I against the West Indies in Kolkata on Sunday it all happened. The 31-year-old Suryakumar did attend the practice session ahead of the first T20I in Lucknow. But BCCI has now ruled out him for the three-match limited-overs series.

“They will now head to the National Cricket Academy in Bengaluru for further management of their injuries,”

The likes of Virat Kohli, Rishabh Pant, and Shardul Thakur have got rest for the series against Sri Lanka. Hence it will give a chance to the likes of Ruturaj Gaikwad and Shreyas Iyer to show what they are capable of.

Now some questions arise as all the above has given rest but they all will absolutely play all IPL matches. So again the old forgotten statements will come that is, players are giving more priority to leagues cricket rather than international games. Get all Betting Apps for IOS and Android here.