Home » News » IND vs SL: Gautam Gambhir on Pujara’s Replacement at No 3 in Tests

IND vs SL: Gautam Gambhir on Pujara’s Replacement at No 3 in Tests 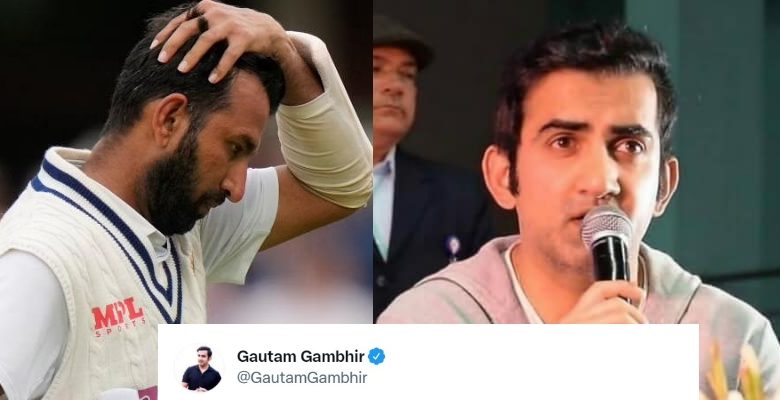 IND vs SL: Former Indian opener Gautam Gambhir has picked Cheteshwar Pujara’s replacement ahead of the Sri Lanka series. Last week BCCI selectors announced the Test squad for the Sri Lanka series. And Cheteshwar Pujara and Ajinkya Rahane were not a part of that squad. The kickstarts of this series are in early March. The 1st India vs Sri Lanka Test starts on 4 March in Mohali. The second Test is scheduled to be played in Bengaluru from 12 March. Find here more Cricket Prediction for the 2022 Season.

Regarded as the ‘Modern Wall’ in the Indian team, premier batter Cheteshwar Pujara will not play the upcoming two-Test series. Both of these batters were under extreme pressure to deliver in the past few series. And they failed to shine with the bat in the away Tests against South Africa.

Now selectors have decided to drop them. As Pujara is no more at the no.3 position so another player obviously has to take on his position. Former Indian cricketer Gautam Gambhir has given his suggestion about this.

IND vs SL : Gambhir Choose This Player On NO.3 Position

India is at a transition phase ahead of the Sri Lanka series. Former Indian cricketer Gambhir feels white-ball maverick Shreyas Iyer can replace Pujara as India’s new No.3 batter. Iyer had impressed selectors by making a sensational Test debut against New Zealand at home. The newly appointed Kolkata Knight Riders (KKR) skipper had slammed a sublime century in his debut Test match at Kanpur.

“He has been brilliant so far. He showed it during his innings against New Zealand. Not everyone can score a century in their first Test innings. He has got all the shots and has the temperament of a middle-order batter. Iyer can build an innings well and play anchor. He can be the perfect No. 3 batter for India. I don’t see why he can’t replace Pujara in India’s Playing XI,”

Looking for some Cricket Prediction? Read here and learn more about the upcoming match.

The former Indian cricketer believes that Iyer can build an innings well and play anchor. Hence he will be the perfect No. 3 batter for India. “I don’t see why he can’t replace Pujara in India’s Playing XI,” Gambhir said. There is no doubt that Iyer had a commendable start to his Test career. As he became the 16th player to score a century in his first Test match for India. The list contains names like Mohammad Azharuddin, Sourav Ganguly, Rohit Sharma, Virender Sehwag, Shikhar Dhawan, and Prithvi Shaw.

IND vs SL: Iyer had smashed a hundred in his debut innings for India against New Zealand last year. In the second innings, he slammed a fifty. Highlighting Iyer’s century in his first Test innings against New Zealand, Gambhir said that not everyone is able to achieve this feat. However, during the tour of South Africa, Iyer had to make way for the likes of Rahane and Pujara.

As both of them now dropped, Iyer is a certain candidate. And as per Gambhir, Iyer should be batting at 3. Very soon we will know whether the new full-time captain for India Rohit Sharma agrees with Gambhir or not. Shreyas well an established player now.

During the first test against New Zealand in Kanpur, Virat Kohli had taken rest. Iyer came out to bat at his place. The pressure and expectations on him were immense, but he went on to score 105 off 171 balls. His knock consisted of 13 fours and two sixes. His stocks further increased when he scored 65 runs in the second innings

The 27-year-old had become the first Indian to score a ton and half-century on Test debut. Iyer has been named in India’s squad for the two-match Test series against the Islanders. The former Delhi Capitals (DC) skipper will also feature in the upcoming T20I series between the former world champions. The premier batter has played 26 One Day Internationals (ODIs), 33 T20Is, and 2 Test matches for Team India.

Get the best Online Betting Apps for IOS and Android here.