Home » News » IND VS SL: Ishan Kishan Hospitalised After Being Hit In Head In 2nd T20I

IND VS SL: Ishan Kishan Hospitalised After Being Hit In Head In 2nd T20I 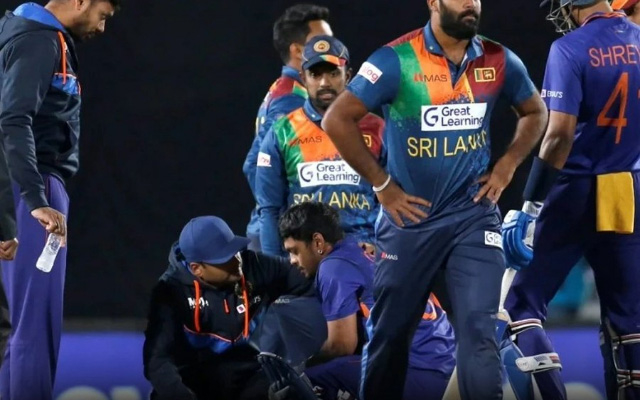 IND VS SL: Ishan Kishan has been hospitalised ahead of the third Twenty20 International (T20I) between India and Sri Lanka. Here are some Cricket Prediction for 2022 Season.

During the second T20I on Saturday (Feb. 26), Kishan got struck on the head. He underwent a precautionary CT scan as advised by Team India’s medical team. The wicketkeeper-batsman was then kept under observation for a concussion at a hospital in Kangra, Himachal Pradesh, according to reports.

“I have been attached to the Indian team and I got information that an Indian player, who has sustained a head injury, has been brought here in the hospital. His CT scan was conducted and he has been under observation,” said Dr Shubham.

Meanwhile, it has also been reported that Sri Lanka batsman Dinesh Chandimal was also rushed to the hospital on Saturday. He sustained a thumb injury while fielding in the second T20I.

“A Sri Lankan player has also been admitted in the hospital, after receiving a thumb injury in the second T20I. We are monitoring everything right now,” added Dr. Shubham.

IND VS SL: Mayank or Venkatesh could play in 3rd T20I

Kishan, who opened the batting with Rohit Sharma on Saturday, suffered a head injury during the fourth over of India’s chase. Shortish delivery from Lahiru Kumara struck straight onto Kishan’s helmet. As the batsman immediately fell on the field, he was attended by the team physio. A few minutes later, Kishan continued batting but two overs later, he got dismissed for 16 off 15.

In the absence of Kishan, either Mayank Agarwal or Venkatesh Iyer will get an opportunity in the third T20I, which will be played on Sunday (Feb. 27) at the same venue in Dharamsala.

Agarwal was added to India’s T20I squad after opening batsman Ruturaj Gaikwad was ruled out of the series due to a wrist injury. The Karnataka batter had been quarantining in Chandigarh, a four-hour drive from Dharamsala, along with the rest of India’s Test squad.

The two-match Test series is scheduled to begin on March 4 in Mohali. The second game will be played at Chinnaswamy Stadium, Bengaluru.

India has already sealed the three-match T20I series by winning the first two games. Shreyas Iyer was the Player of the Match in the second T20I in Dharamsala for scoring an unbeaten 74 off 44 during India’s chase of 184. The hosts finished the game with 2.5 overs and seven wickets to spare.

For more legal betting Apps, do check here and learn more about how online betting works.