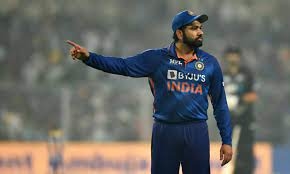 IND VS SL: Rohit Sharma became the most successful Twenty20 International (T20I) captain at home on Saturday. Rohit achieved the milestone during India’s seven-wicket victory over Sri Lanka in the second T20I at Himachal Pradesh Cricket Association Stadium, Dharamsala. Looking for more Cricket Prediction for the 2022 Season? Find more here on our site.

The win saw India register an 11th straight win in the T20Is and also attain an unassailable lead in the three-match series against the neighbors.

Rohit now has 16 wins in 17 T20Is at home to his name. The Indian captain is ahead of his English counterpart Eoin Morgan, who has 15 wins in 25 matches. New Zealand skipper Kane Williamson is third in the list with Australia’s Aaron Finch and former India captain Virat Kohli next in the list. Meanwhile, MS Dhoni had won 10 T20Is at home in 20 matches.

List of top 5 captains with most T20I wins at home

Overall, Rohit has captained India to 23 wins in 27 matches in the T20Is and has led the Men in Blue to 11 consecutive wins in the shortest format of the game. Meanwhile, this is also India’s seventh series victory on the trot at home.

On Saturday, Rohit won the toss and asked Sri Lanka to bat in the second T20I. Sri Lanka opener Pathum Nissanka top-scored for his side with a knock of 75 off 53. Skipper Dasun Shanaka struck five sixes and two fours in his cameo of 47 not out from 19 balls towards the end to take Sri Lanka to 183 for 5 in 20 overs. Get here more Bet365 Betting Tips and learn them more from the experts.

In reply to that, while Rohit failed with the bat, Shreyas Iyer, Sanju Samson, and Ravindra Jadeja stepped out to finish the job for India.

Batting at No. 3, Iyer remained unbeaten on 74 off 44, including four sixes and six fours. Samson scored a 25-ball 38. Jadeja produced fireworks in the end with his 18-ball 45 as the hosts sealed the game with 2.5 overs to spare.

India captain Rohit hailed his players in the post-match presentation on Saturday in Dharamsala.

“It was an important knock from Shreyas, couldn’t have asked anything more from him, Jaddu came up well with the bat,” Rohit said.

Rohit went on to add that Samson’s knock showed that “it’s all about taking your opportunities.”

“We have a lot of talent in that batting unit, we will keep giving them the chances, it’s up to them to make the most of it. I thought Sanju showed how well he could play with that knock, it’s all about taking your opportunities. Lot of these guys are quite talented. They just need an opportunity to go out there and express themselves.

“There are a lot of guys waiting in the wings as well but their time will come as well. We’ve got to look after the guys who have been in and around the team for a while. We understand all these guys possess a lot of talent. So it’s just about giving the opportunity and the backing from our side,” added Rohit.

The third T20I between India and Sri Lanka is scheduled to be played on Sunday (Feb. 27). Following that, India and Sri Lanka will lock horns in a two-match Test series. The first Test will begin on March 4 in Mohali. Fo more Cricket Tips and upcoming match updates, read more here.