Home » News » IND vs SL Test: 5 Players to Watch Out for in the Test Series

IND vs SL Test: 5 Players to Watch Out for in the Test Series 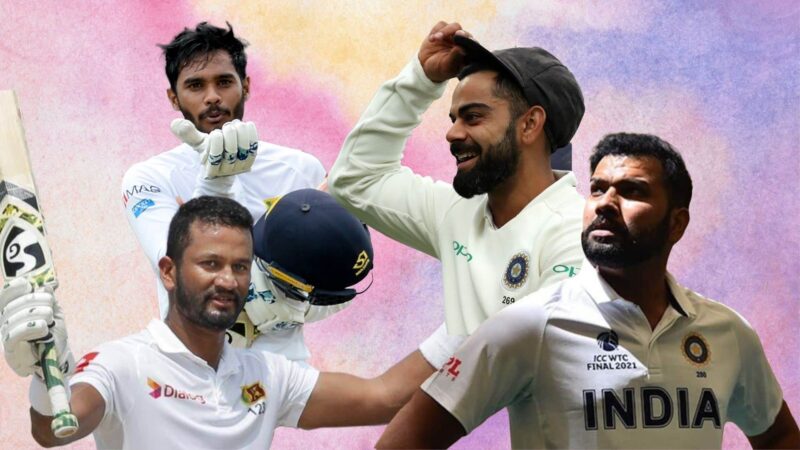 IND vs SL Test: Following an exciting T20I series between India and Sri Lanka, the focus now shifts to the red ball, a format that has been fruitful for India over the last decade. However, it will not be Virat Kohli leading the team, as Rohit Sharma was recently appointed full-time Test captain. Sri Lanka are low on confidence following the clean sweep in the T20Is. However, they are a much-improved side in the Test format. For live cricket betting odds and tips from the experts, read more here on our site.

India would like to forget the painful 2-1 loss at the hands of South Africa early this year. Meanwhile, Sri Lanka has won their previous Test series against the West Indies and is riding high on confidence with a much-improved Test team. The islanders are currently leading the table with 100% points won.

After their poor form over the last two years, India has dropped experienced batters Ajinkya Rahane and Cheteshwar Pujara in favour of young players. Sri Lanka has some experienced players in their lineup for the first Test, which begins on March 4th at the PCA stadium in Mohali. With that said, let’s take a look at players to watch out for in the Test series.

IND vs SL Test: 5 key players in the Test series

The whole limelight will be on Virat Kohli who is going to appear in his 100th Test match. After eight years in the longer format, Kohli will be playing under a new captain, and this may be his best chance to regroup. The 33-year-old hasn’t scored an international century in three years and will be eager to make a mark in his milestone Test.

Kohli recently stepped down as India’s Test captain after the country’s tour of South Africa, where he scored 161 runs in four innings. However, he found new ways to be dismissed, which is unlike his usual batting exploits, and a good series here could completely change the atmosphere around him.

Rohit Sharma will captain India for the first time in red-ball cricket. The right-hander was in superb form in the Tests in 2021. India sorely missed him on their tour to South Africa. His consistent performances in India and elsewhere earned him the vice-captaincy hat ahead of the South Africa tour.

Rohit is currently ranked sixth in the ICC Test rankings for batters, with an average of 46.87 in 43 Tests, which is impressive given that he has been in and out of the side since his debut in 2013. In the upcoming Tests, he will look to dominate the Sri Lankan bowling attack and score a lot of runs.

Looking for more Cricket tips and guides for the upcoming match? Check it out here on our site.

Shreyas Iyer could be the team’s middle-order batsman in the first Test against Sri Lanka. In the series, Iyer has been given a chance ahead of Ajinkya Rahane and Cheteshwar Pujara.

In his debut Test against New Zealand in November of last year, the right-handed batsman smashed a century and a half-century. During the T20I series against Sri Lanka, Iyer batted brilliantly in the middle order. Now, he’ll try to replicate that performance in the Test series as well. He is touted to be the next number 3 for Team India.

Dimuth Karunaratne will captain Sri Lanka in the upcoming Test series against India. Karunaratne’s experience may pose a challenge to Indian bowlers. Last year, the left-handed batsman performed admirably in Tests, scoring 902 runs in 13 innings at an average of 69.38. He also blasted four centuries and three half-centuries in the process.

His battle with Jasprit Bumrah will be one to watch out for. Bumrah, the spearhead of India’s bowling attack was rested for the ODI and T20I series vs West Indies. The 28-year-old who has been chosen as Rohit Sharma’s deputy for the Test series has taken 12 wickets at an average of 23.41 in the South Africa Test series.

Pathum Nissanka is another emerging Sri Lankan batsman. He displayed a glimpse of his excellent batting in the second T20I between India and Sri Lanka, where he smashed a blistering 75-run knock. Nissanka will also try to put on a better performance in the Test series.

Nissanka had a fabulous Test series vs West Indies where he accumulated 361 runs at an impressive average of 52. The 23-year old has already taken giant strides in his short career and he is expected to have another breakthrough Test series vs India. Get all best betting Apps for IOS and Android here.