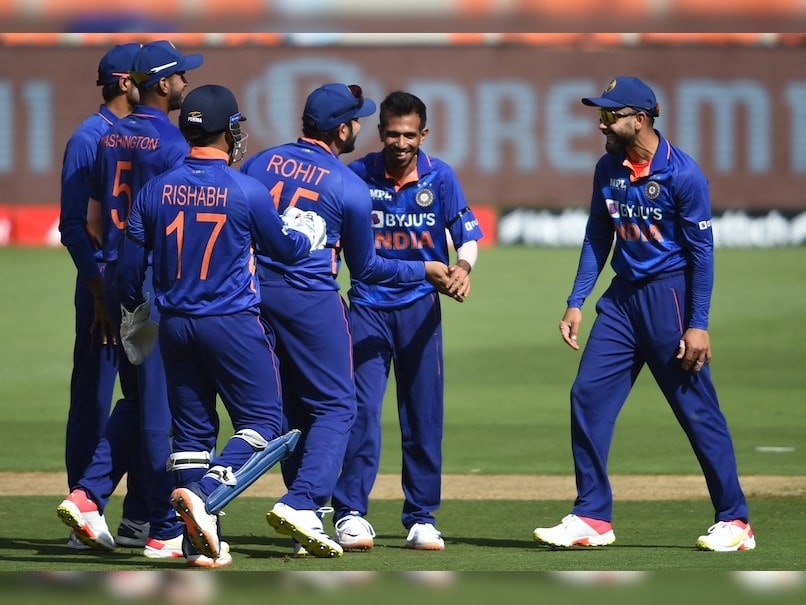 IND vs WI LIVE: Bowlers came to the rescue as India defended a below-par 238 to clinch the 2nd ODI vs West Indies by 44 runs at Ahmedabad. With this, they take an unassailable 2-0 lead in the 3-match ODI series. It was not as simple or as comfortable as the first ODI, but a win nonetheless. Rohit Sharma’s captaincy was put to test and he somehow managed to prevail. Looking for cricket betting tips today? Read more here.

After being put in bat, India recovered from a top-order failure to post 237/9. Suryakumar Yadav played a gritty knock of 64 and KL Rahul was run-out for 49(48). India was reduced to 43/3 before these two added 91 runs for the fourth wicket to lift India’s score. Deepak Hooda’s late flurry took India’s score past the 230 mark.

The tourists got off to a steady start, stitching a 32-run opening stand before it all fell apart. Pacer Prasidh Krishna was the star of India’s second innings, taking four wickets for 12 runs as they bowled out the Men in Maroon for 193. Shardul Thakur chipped in with a couple of important wickets as well. Here’s a look at 5 talking points from the game.

1) Opening the innings with Rishabh Pant

After the Windies won the toss and chose to bowl first, everyone was surprised to see Rohit walk out with Pant by his side. With the return of KL Rahul, Ishan Kishan was dropped from the match, and Pant was promoted to the top. After the match was over, Rohit clarified he was asked to try a couple of things and that was one part of the plan.

Pant is not a bad option. He is naturally aggressive and India need someone like him who can maximize the powerplay while Rohit plays the second fiddle. Well! if the experiment would have worked maybe the management could have continued with him. But as Rohit announced Shikhar Dhawan will be back for the final ODI.

2) Ind vs WI: Kohli and his love for outside edges

Virat Kohli, who hasn’t been at his best recently, was out once again, flashing outside the off-stump to medium-pacer Odean Smith. Edging the ball to slip cordon while chasing wide deliveries has been the common form of dismissal for Kohli. Analyzing his dismissal former India cricketer Murali Kartik said Kohli is trying too hard to boss the opposition. The former left-arm spinner added Kohli is too classy a player to miss out and it’s just his mindset and decision-making that has been different over the last couple of years.

“He’s too classy a player… The runs will come… Just the mindset and the decision making in the last couple of years (has been indifferent). These are not the shots you will see him playing in the early part of his innings. It seems as if he wants to boss the opposition because he has been doing that for 13-14 years,”

3) Ind vs WI: Has Prasidh Krishna solved India’s powerplay woes with the ball?

Prasidh Krishna bowled with pace and skill as he registered outstanding bowling figures of 4/12 in nine overs. West Indies ambled to 32/0 but the game turned on its head when Rohit handed the ball to Prasidh in the eighth over.

Prasidh struck immediately, hitting a hard length outside off and extracting extra bounce. Brandon King failed to get on top of the bounce while attempting an expansive slash. He removed old horse Darren Bravo will an outswinger and again came back to dismiss Nicholas Pooran with back of a length that moved away, squaring the left-hander. Pooran could only nick it to Rohit who was standing at a wider first slip. That was quite an audition by Prasidh just two days prior to the mega-auction.

His bowling performance surprised all including the captain himself. At the post-match presentation, Rohit said

“I have not seen that kind of spell in a long long time in India. He bowled with skill, he bowled with pace,”

Get all cricket match predictions on our sites.

Suryakumar Yadav’s stock continues to rise for India after he delivered yet another valuable knock. Suryakumar scored a valuable half-century in the second ODI between India and West Indies on Wednesday in Ahmedabad, his fifth game in one-day internationals. He scored 64 off 83 balls and hit five boundaries.

India was in deep trouble when he walked to the crease in the 12th over. He hung in there with KL Rahul and started India’s recovery. The 31-year old who likes to take on the opposition played to the situation. He created a unique world record all the way, the moment he reached 30. Suryakumar became the 1st batsman with six 30-plus scores (31*, 53, 40, 39, 34* and 64 today) in his first ODIs.

5) KL Rahul back in middle order

Before the second ODI, there was much speculation about KL Rahul’s batting position. But the team management has put all to bed as Rahul was reinstated back in the middle order. He was tried as an opener in South Africa but that didn’t work.

It is bewildering because KL has been successful as a T20 opener not only for his old franchise Punjab Kings but for India as well. But only the vice-captain can answer his two-way approach in ODIs and T20s. The 29-year-old was primarily seen as a floating opener, much like what Jason Roy does for England.

However, his performance in the middle-order has been noteworthy. KL took calculated risks as India were 3 down and batted with a strike rate of over 100. He was well-set for a big one before he was run-out. Know all the best betting apps and get the latest match updates.