Home » News » IND vs WI: The Men in Blue Won the Second T20I and Achieved Another Massive Feat in T20 International

IND vs WI: The Men in Blue Won the Second T20I and Achieved Another Massive Feat in T20 International 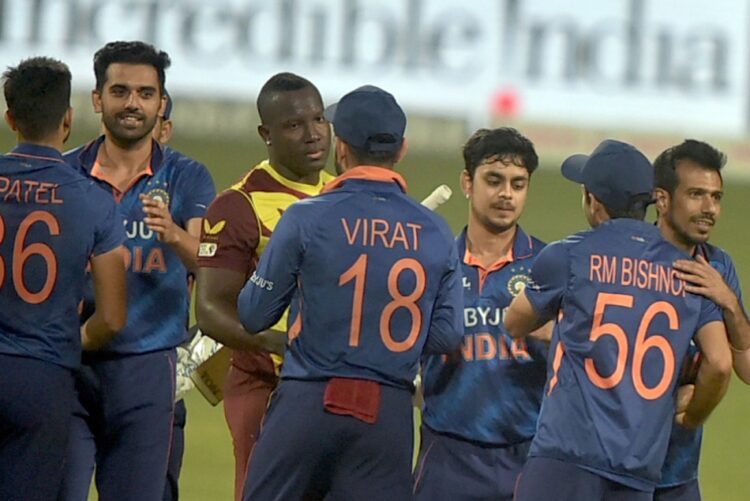 IND vs WI: The Men in Blue have won the second T20I match against the mighty West Indies. And now India has achieved a massive feat in the T20 international. They have become only the second team to win 100 T20I matches in the history of the game. On Friday, India faced West Indies in the second match of the series. And the match went to the last bowl of the 20th over and turned out to be a thrilling contest. Here are some Cricket Match prediction sites for the 2022 Season.

And it was the Indian team who held their nerve and won the last over of the innings. A total of 364 runs were scored in 40 overs. And India has now won the series as well, taking an unassailable lead of 2-0 in the three-match series, with one to play. And they have maintained their good run against the West Indies.

Earlier in the match, West Indies won the toss and asked Rohit and his men to bat first. India didn’t have the start they would have wanted and lost their first wicket early. Ishan Kishan didn’t look comfortable during his eight-ball stay. Former skipper joined Rohit Sharma in the middle and both batters tried to add some runs. And in the process, Rohit got out to Rostan Chase. And it was not the day for Suraykumar either, as he became the second prey of Chase for a score of 8.

Find some reviews about Mobile Bet365 here and learn how it works online.

Virat was hitting an odd boundary here and there and got his fifty with a six-over long-on. But soon, he fell after getting his half-century. He scored 50 runs off 41 balls. The team was struggling at 106/4 with only two recognized batsmen left. However, both R Pant and Venkatesh Iyer played with maturity and added a vital 76 runs in just 35 balls for India. Rishabh Pant (52 off 28 balls) scored his unbeaten half-century and Venkatesh Iyer scored 33 runs of 18 balls. Both batters helped India reach a decent total of 186 runs in their 20 overs.

Chasing the target, West Indies started slow and lost two wickets to spinners in the middle. The Indian bowlers didn’t let the batters score freely. But then came the match-turning partnership for the third wicket between Nicholas Pooran (62 off 41 balls) and Rovman Powell (68* off 36 balls). Both batters thrashed Indian bowlers and added 100 runs for the team off just 60 balls. Both batsmen scored their half-centuries and brought their team near to victory.

The game was slipping from the hands of the Indian team. But it was the last few overs from the Indian quicks who didn’t allow the West Indies to win and won the game for the team. In particular, the 19th over from veteran pacer Bhuvneshwar Kumar, who gave up 4 runs in that over. And India won their 100th match in Twenty-20 cricket in just 155 games.

Looking for Cricket Betting Tips for free? Check out here on our site and learn them from the experts.