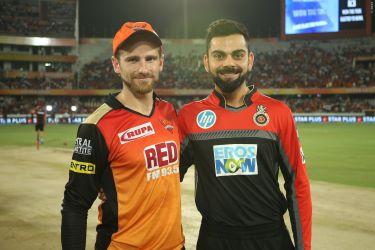 RCB will take on SRH in match number 52 in IPL 2021 at Abu Dhabi. It is the teams who are almost on the opposite end of the tables. RCB became the third team in the last match to qualify for the playoffs. They will want to win the remaining two matches to have a chance to be in the top 2 spots While SRH is last on the table with just 2 wins and would be looking to win the remaining fixtures for pride. Find the best ipl cricket betting sites.

When both the teams met last time in IPL 2021 it was RCB who won the match by 6 runs wickets in Chennai.  RCB scored 149 in the 1st innings, with Glenn Maxwell the top scorer at 59. While SRH failed chased it down in 20 overs with David Warner top-scoring at 54. While for RCB it was Shabaz Ahmed who troubled SRH as he took 3 wickets in 2 overs just giving away 7 runs in the match.

We look below at some of the records and approaching milestones for players of RCB and SRH.

2 – Sandeep Sharma needs 2 more wickets to be the top wicket-taker against RCB. He has taken 23 wickets against them at an average of 18.21.

3 – Virat Kohli needs 3 more runs to be the 2nd highest run-scorer against SRH. He has scored 564 runs at an average of 37.6 against SRH.

4 – AB De Villiers need to hit 4 more sixes to surpass Chris Gayle to become the highest six-hitter for RCB. De Villiers has hit 236 sixes for while Gayle has hit 239 sixes for RCB.

100 – If Sandeep Sharma plays, he will be playing his 100th match in the IPL. He has also played for Punjab Kings(Kings XI Punjab) in IPL

10CRIC sportsbook is fully legal with every operation.