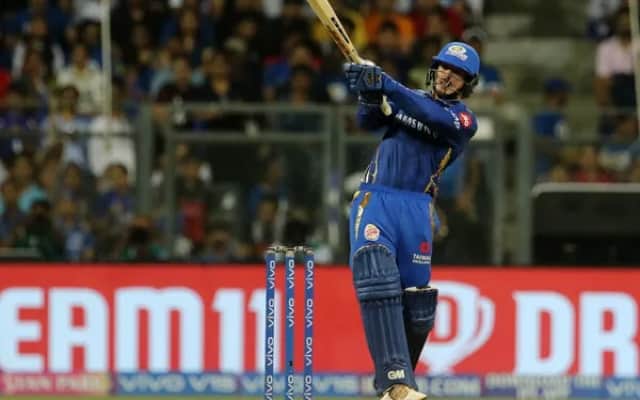 Ahead of their second match in the 14th edition of the Indian Premier League (IPL) against Kolkata Knight Riders (KKR), Mumbai Indians (MI) fans have been greeted with a piece of good news as it is learned that the South Africa wicketkeeper-batsman Quinton de Kock is ready to take the field on Tuesday, April 13. De Kock arrived late in India after completing his international duties and featuring in the first two One Day Internationals against Pakistan.

As per the SOPs laid out by the Board of Control for Cricket in India (BCCI), the Proteas batsman had to serve a mandatory seven-day quarantine period before he was allowed to participate in the matches. Thus, for the same reason, Quinton gave the season opener against Royal Challengers Bangalore (RCB) a miss. In de Kock’s absence, Mumbai Indians handed a debut to Chris Lynn who had warmed the bench throughout IPL 2020

Ahead of their second game against KKR, Mumbai Indians’ Director of Cricket Operations Zaheer Khan confirmed that De Kock has completed his quarantine period and also participated in the team’s training session on Sunday. Further, the veteran revealed that the Proteas keeper is looking forward to contributing positively for the franchise in IPL 2021 and will be available for selection. Read more about our full parimatch review here in our site.

“Quinton is out of his quarantine. He did his practice session yesterday with the team, [he’s] looking forward to the season. So yes, he’s available for tomorrow’s game,” Zaheer was quoted as saying by ESPNCricinfo.

In the absence of Quinton de Kock, Chris Lynn made his debut for the five-time champion. Though Mumbai lost the game by two wickets against RCB, Lynn was highly impressive with the willow. Opening the innings alongside skipper Rohit Sharma, Chris played a sublime knock of 49 runs off 35 deliveries. Check this free cricket betting tips from us.