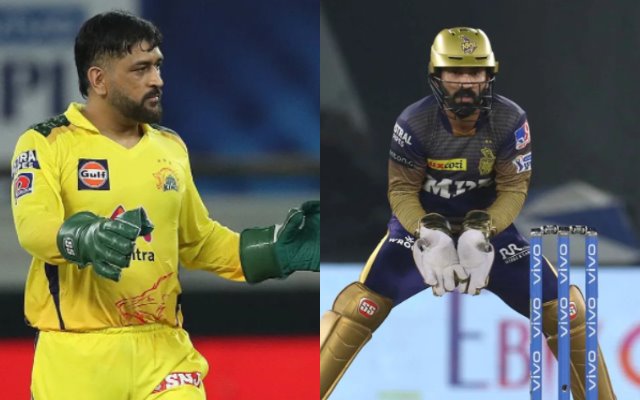 Chennai Super Kings (CSK) skipper Mahendra Singh Dhoni has surpassed Dinesh Karthik to become the wicketkeeper with most catches in the Indian Premier League (IPL). Coincidently, Dhoni caught Karthik to own the record. The veteran now has 116 catches to his name, one more than Karthik’s 115. Dhoni is also the wicketkeeper with most dismissals in the IPL, with 155 scalps, including 36 stumpings, while Karthik is following him with 146 dismissals. Dhoni, who had 114 catches to his name before the start of the match also caught Venkatesh Iyer off the bowling of Shardul Thakur in the sixth over to level with Karthik. Check our review about bet365 live chat  here in our site.

Meanwhile, CSK defeated KKR by 2 wickets in a nailbiter to get their one foot into the playoffs. CSK was cruising to a win at 101-1 but KKR bounced back to bring the equation down to 26 of 12 balls. However, Ravindra Jadeja stroked Prasidh Krishna for 21 runs in the penultimate over to almost seal the game for CSK. The Men in Yellow needed four of the final over and while they lost of a couple of wickets, they reached home on the final ball of the match.

This was CSK’s eighth win in 10 games. Earlier, KKR posted a formidable 171/6 in their 20 overs. They got off to a good start and scored 50 in the first five overs. However, they lost the momentum and at one point looked like settling for a score under 150. However, a late blitz by Dinesh Karthik pushed them to 171.

CSK has been magnificent in the season. However, they owe their success to the openers Ruturaj Gaikwad and Faf du Plessis. Both players have been rock solid for CSK and have scored 394 and 362 runs respectively.

Here are the top online betting apps  you can download.