Home » News » IPL 2022: 3 South Africa Players Who Have Played in IPL History And Are Part of This Season

IPL 2022: 3 South Africa Players Who Have Played in IPL History And Are Part of This Season 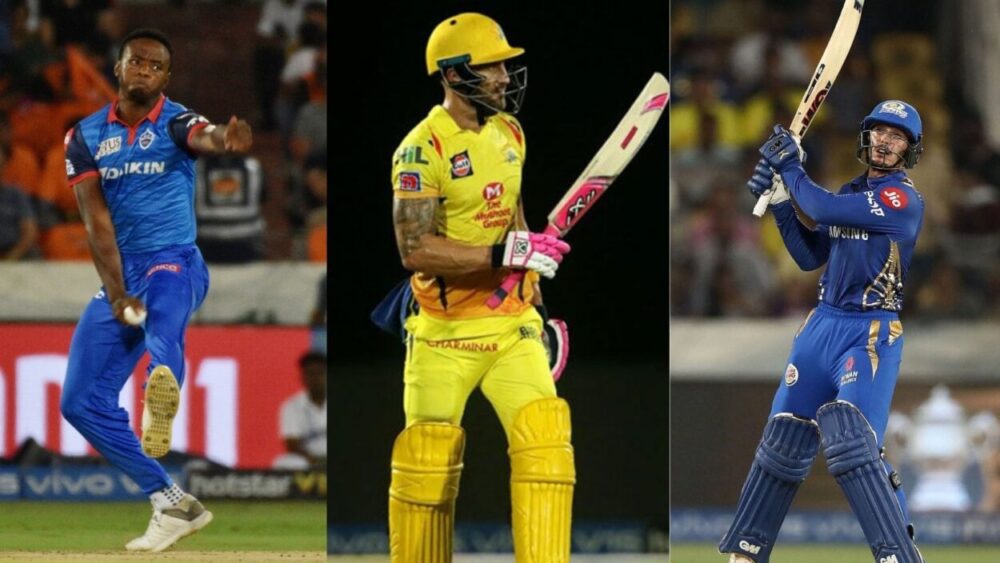 IPL 2022: The Indian Premier League has changed the view of T20 cricket for the fans. And it has definitely been a career-changing event for many cricketers over the years. It is not only for Indian cricket; the IPL has given many talented cricketers to other countries as well. And over the years, it has produced some of the biggest names in the shortest format of the game. Some of the players who rose to prominence as a result of this marquee league include Ravindra Jadeja, Shaun Marsh, Hardik Pandya, and Andre Russell.

Find here today’s IPL Match Prediction for the 2022 Season and learn more about the upcoming match.

Here we will talk about some of the superstars who played in the IPL earlier and are still a part of the IPL this season as well. A total of 590 players were selected to come under the hammer in IPL 2022. And 204 players were sold overall in the two-day event. And there are many big overseas players who are taking part in IPL 2022. So we have brought you some veteran South African players who have had the biggest impact on this tournament with their performance and have found a new franchise for themselves.

IPL 2022: Top 3 South African Players with IPL Experience Who Will Play in the 2022 Season

The veteran South African player was one of the biggest reasons behind CSK’s success over the last few seasons. However, the Chennai Super Kings didn’t retain the former South Africa skipper, and he entered the auction with a base price of 2 crores. He was one of the ten players to feature in the marquee list at the auction. And it was RCB that bought him at auction at a price of INR 7 crore. And it means we will not see him in the yellow jersey again.

Chennai Super Kings won the last IPL season, and Faf du Plessis was the most important player for them, along with his opening partner Rituraj Gaikwad. It was his innings of 86 runs that helped CSK get to a competitive total of 192, which proved to be enough to win the match.

Du Plessis scored 633 runs in the entire season with an impressive average of 45.21 in 16 matches. He was the second-highest run-scorer for the Yellow Army, just three runs short of Rituraj Gaikwad. It was his explosive batting at the top that helped CSK to lift their fourth IPL title. Faf was also part of the IPL 2018 title win for Dhoni and his men.

Get the latest Cricket Online Betting Apps for IOS and Android here.

South Africa wicket-keeper batsman Quinton De Kock is the second on the list. The opening batsman played his debut match in the Indian Premier League way back in 2013 for Sunriser Hyderabad. He has also played for Sunrisers Hyderabad, Delhi Daredevils (now Delhi Capitals), and Royal Challengers Bangalore. But his breakthrough performance came when he joined the Mumbai Indians in 2019.

However, Mumbai Indians didn’t retain the opener ahead of the 2022 auction. And De Kock entered the auction on the marquee list with a starting bid price of 2 crores. MI tried to get him back in the auction, but it was Lucknow Super Giants who got the left-hander at a price of INR 6.75 crore.

There is no doubt about the ability of the South African speedster, Kagiso Rabada. He is one of the best in business in the modern era. Rabada made his IPL debut in 2017 with the Delhi Daredevils (now Delhi Capitals). He has played five seasons for DC, but the franchise released him ahead of the IPL 2022 auction.

The South African pacer entered the auction on the marquee list with a price tag of 2 crore. And there were five franchisees who were interested in getting him on their team, which shows the value of the player. But eventually, it was Punjab Kings who got the South African pacer at a price of INR 9.25 crore, and he was one of the cosliest players in the IPL 2022 auction.

Rabada has played 50 IPL games so far and has 76 wickets to his name at an economy of 8.21. He was one of the main reasons for DC’s good performances over the last few seasons. Delhi Capitals made it to the finals of IPL 2022 and it was largely due to Rabada. The pacer was the Purple cap holder in that season, who took 30 wickets in just 17 games and helped DC reach the finals.

Looking for some IPL Betting tips? Read more here and learn more from the experts.