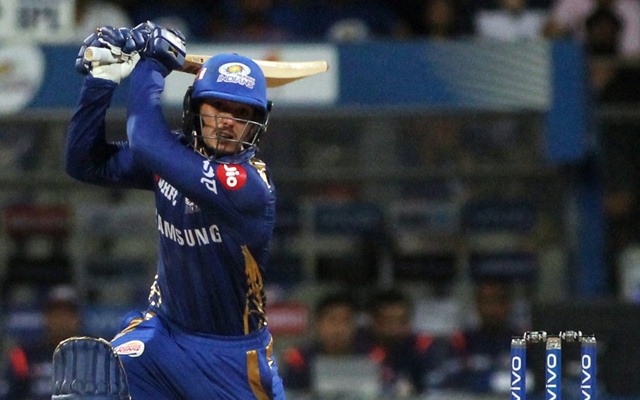 IPL 2022: Quinton de Kock had a brilliant start of the year while playing 3 ODIs against India in January. The South African batter has left the long form of cricket and has marked his availability for ODIs and T20s. This has come as positive news for the South African cricket team and for the teams who will be taking part in the IPL 2022 mega auction. The southpaw has a huge pool of experience and talent that any team can make use of.

Quinton de Kock made his debut forIPL in 2013 with Sunrisers Hyderabad. He was just part of 4 matches with the team and couldn’t contribute much for SRH. However, things completely changed for the South African hitman when he joined Delhi Daredevils in 2014. In 7 appearances, de Kock scored 153 at an average of 21.85 and a strike rate of 118. He finally gained the attention of the IPL scouts and since then de Kock has become a valuable player of the league.

In the 2021 season of IPL, while playing for Mumbai Indians, Quinton de Kock was a part of 11 fixtures and scored 97 runs at an average of 29.70 and a strike rate of 116.01. This was not his best performance as in IPL 2020 and 2019 he maintained an average of 35 and scored 503 and 529 runs respectively in 16 matches each. It came out as a shock when Mumbai Indians didn’t retain him. Seeking IPL betting tips for free? Read more here.

Now that IPL mega auction is just a week away, Quinton de Kock will be on the shopping list of all the franchises. There is a possibility that even Mumbai Indians might bid for him again. In this article, we have compiled a list of 3 teams, that might target Quinton de Kock.

Sunrisers Hyderabad had a very disappointing season last year and it will haunt them for a long time. It will not be easy for SRH and their management to revive from last year’s finish and the controversies which they created. David Warner is gone from the team and SRH won’t even try to buy him back.

With Kane Williamson on their side as a skipper, SRH would be looking for a strong replacement for David Warner. There is no name stronger than Quinton de Kock who can give them a good start in a match as an opener. Williamson will be keeping himself for the middle-order lineup and would like de Kock to handle the opening partnership.

There is one more reason that SRH will definitely target de Kock. The orange team has not done well with an Indian wicket-keeper. Their previous keeper, Johnny Bairstow, is also gone and Quinton de Kock is the best and a better replacement. The South African southpaw has already played under the SRH management and can look forward to joining his debut team.

It was a shock to see Mumbai Indians releasing their match-winner last year. Quinton de Kock was the prime player for Mumbai Indians in both the trophy wins during 2020 and 2019. He made his debut for MI in 2018 and in his debut year itself, he became a crucial member of the team. The opening pair of Rohit and de Kock is one of the best pairs in the league and it has ruled the stats for a long time. Even though the player and the team have parted ways, MI will be trying their best to bring de Kock back to the team. MI also released Ishan Kishan but technically the Indian player will cost them a lot and can be a huge risk.

Quinton de Kock is in form and has played some exceptional innings in the recent past out of IPL. During India’s tour of South Africa, the Proteas player turned out to be a match-winner for the team. MI scouts would have made their report accordingly and will be advising the management to pitch for their ex-player again. Here’s cricket match prediction app that are safe to use.

Quinton de Kock is a ferocious batsman and can prove dangerous like AB de Villers for the opposition. RCB has retained the likes of Virat Kohli, Glenn Maxwell, and Mohammad Siraj so far ahead of IPL 2022 and they have been searching for explosive openers over the years. Virat Kohli was successful as an opener for the Bangalore team if de Kock joins Kohli, it can become a deadly combination.

The equation can prove to be a match-winner between both the players. Kohli is a player who takes time to play big knocks. Quinton de Kock, on the other hand, is an efficient batsman during the power play. This will give Kohli a chance to play without the pressure of hitting the ball during the power play. RCB do not have wicketkeepers among their retentions and De Kock is among the best in the business at the moment. Here are some IPL sponsors for this season.