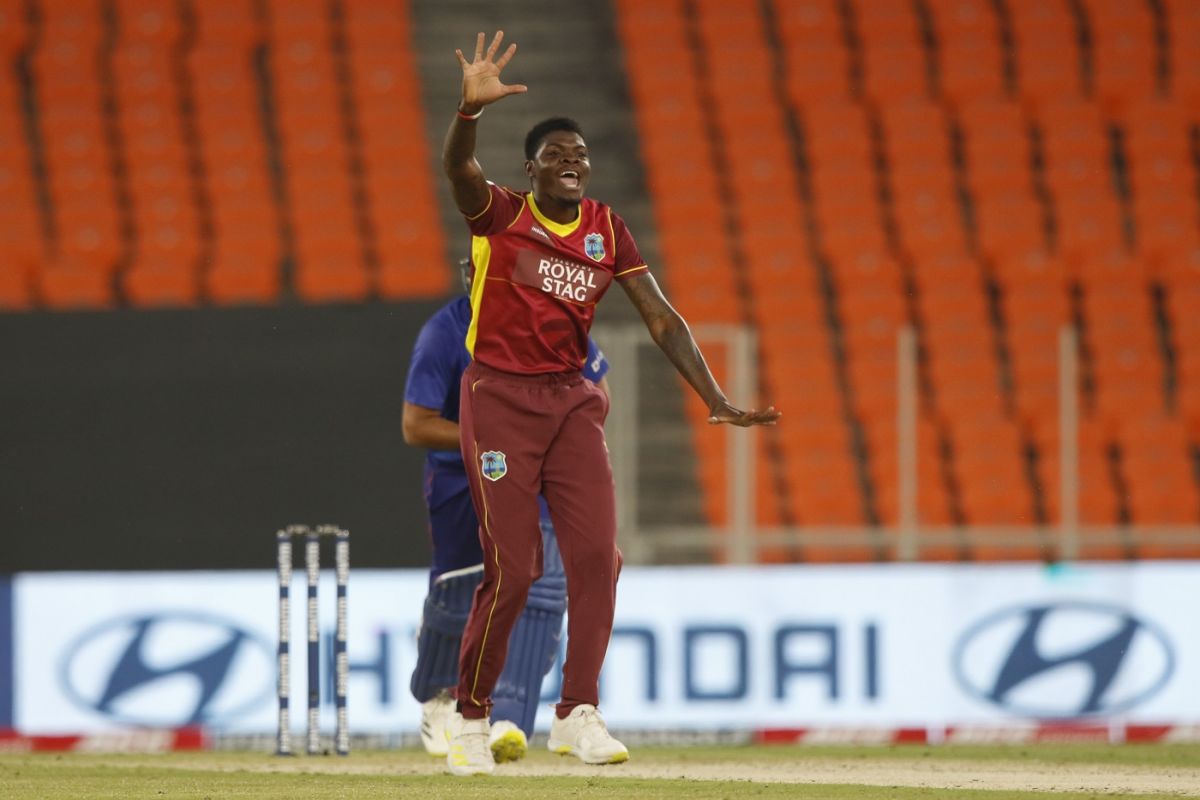 IPL 2022 Auction: Harbhajan Singh has tweeted that Alzarri Joseph will be a ‘crorepati’ in the upcoming IPL auctions. Harbhajan seems impressed by Alzarri’s show in the ongoing ODI series between India and West Indies. While commentating in the second ODI for Star Sports, the former Indian off-spinner had showered praises on Joseph’s bowling.

So far in two matches, Alzarri Joseph has been the best bowler for the visiting side. Averaging around 20 with the ball, the West Indies paceman has picked up four wickets with an economy of under 5. Joseph has scalped two wickets in both ODIs in Ahemdabad.

IPL 2022 Auction: The pitches in Ahemdabad haven’t been easy for batting in this series so far. Being a bit tacky at the start of the innings, the pitches have also provided good bounce. Joseph, with his hit-the-deck-hard bowling, has utilised this advantage.

In the first ODI, India was on its way to an easy victory. However, the West Indies speedster provided two quick wickets and added a bit of spice to the match. Joseph’s sharp nip-backer proved to be too good for Rohit Sharma, and an uncontrolled pull led to Virat Kohli’s wicket.

Joseph bowled an economic spell in the second ODI and provided the much-needed control to his side. He scalped the wickets of Shardul Thakur and Mohammed Siraj, however, his economy of just 3.6 was of more relevance.

Joseph has been impressive in ODIs for quite some time now. The 25-year-old is the leading wicket-taker (38 wickets in 20 matches) in the 50-over format since 2020. In this timeframe, he has maintained an excellent average of 21.31 with a good economy of 4.44. The attacking bowler is a pretty skilled bowler and can enjoy a long career.

Alzarri is a versatile pacer. He can move the ball at times and has the speed to work with. His biggest strength is the ability to extract extra bounce off the deck, and bowl with good zip. As visible in this series, it hasn’t been to get on the top of bounce against Joseph. He rushed even the great Virat Kohli. The pitch has helped, but Alzarri has been absolutely relentless.

Alzarri’s best role could be to operate as an enforcer in the middle overs. Although he can’t be an out-and-out death bowler as of now, his hard-lengths can hurry many batsmen. Joseph would well as a support bowler and will be an excellent option against not-so-great batsmen of fast-bowling.

Alzarri has already played (3 matches) in the IPL. He had a dream debut for Mumbai Indians in 2019, as he bagged a six-wicket haul for just 12 runs against Sunrisers Hyderabad, and was presented with the ‘Man of the Match’ award. However, he was expensive in the next two games and didn’t feature in the league afterward.

In the upcoming mega auction, Alzarri has registered himself with a base price of 75 lakhs INR. Even though his overall T20 numbers (an economy of about 9) aren’t great and he hasn’t played T20Is yet, teams can punt on his terrific potential.