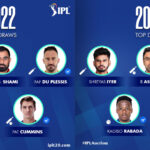 IPL 2022 AUCTION: IPL 2022 auction list is out and 10 players have been put on the Marquee players list. The base price for Marquee players is INR 2 crores and comprises 4 Indian and 6 overseas players.

INR 2 Cr is the highest reserve price and as many as 48 players have chosen to be placed in this bracket. There are 20 players in the bracket of players with a reserve base price of INR 1.5 Cr. While 34 are listed with a base price of INR 1 Cr.

A total of 1214 players had registered for the auction scheduled for February 12th and 13th February in Bengaluru. However, only 590 players managed to make the cut into the final list of auctions as per the franchises’ wishlist. Two more franchises – Team Ahmedabad and Lucknow Super Giants – have been added this year. A total of 10 franchises will tussle out to rope in the best talent from the pool of 590 players. Out of 590 players, 370 are Indian and 220 are overseas players. Read our IPL cricket betting tips and check how we predict matches.

From the list of 220 overseas players, the highest entries are from Australia(47) followed by West Indies(34) and South Africa(33). New Zealand and England each have 24 entries. Read our IPL cricket betting tips and learn how to predict to

South African 42-year-old spinner Imran Tahir is the oldest in the auction while 17-year old Noor Ahmed of Afghanistan is the youngest.

Among 590 players who have made to the final list of auctions, 228 are capped players, 355 are uncapped players and 7 belong to the Associate Nations. S Sreesanth will undergo the hammer this year. Sreesanth was not preferred by any franchise last year, thus failing to make it to the final auction list. Jofra Archer has registered for auction but is unlikely to be available for the IPL 2022.

There are players in the first round of the auction who could end up being among the biggest buys of this year’s IPL. Ishan Kishan decided to go into auction despite new franchises – Lucknow Super Giants and Team Ahmedabad showing interest in acquiring him pre-auction.

Tamil Nadu’s tall and muscular batsman Shahrukh Khan is expected to be the hot pick at the auction. Aakash Chopra had earlier expressed the possibility of Shahrukh becoming the most expensive uncapped player at this year’s IPL auction. Shahrukh was recently inducted into the T20I side against WI and has now raised his base price from 20 Lac to 40 Lac.

18-year-old U-19 WC sensation Dewald Brevis is expected to start a bidding riot amongst the franchises in the auction. He is commonly known as Baby AB and has already caught the eye of several franchises. Here are some cricket prediction apps for android.