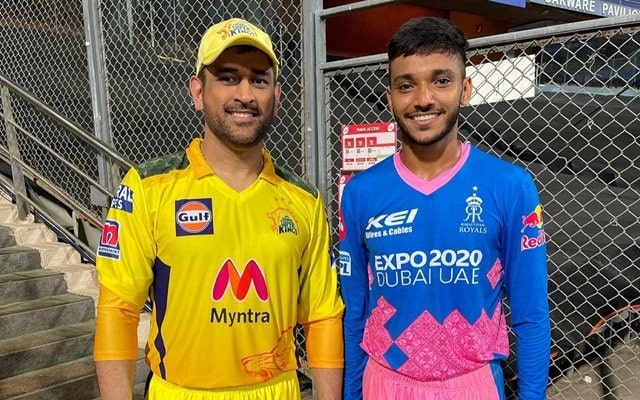 IPL 2022 Auction: Left-arm fast bowler Chetan Sarkariya has professed his desire to play under the leadership of MS Dhoni. Sarkariya will undergo the hammer at the IPL mega auction scheduled for the 12th and 13th of February in Bengaluru.

As the IPL mega auction nears, it is becoming difficult for players to withhold their excitement. As many as 590 players who have made it to the final list of auctions will undergo the hammer to find the best deals. Excitement is quite high among the young players. Check the latest news about IPL title sponsor replacement.

Chetan Sarkariya, who played his first IPL season last year, will undergo the hammer at this year’s auction. Ahead of the auction, the player opened up about his admiration for MS Dhoni. He added how the IPL changed his life and how much he dreams of playing under MS Dhoni and learning from him.

In his conversation with News9, Chetan Sarkariya said:

“The last auction changed my life. My dream is to play under MS Dhoni. He has helped so many bowlers evolve. And to pick his brain, watch him prepare, can take my game to a different level. Dhoni is any bowler’s dream and it will be surreal to play and learn under him. I would love to play under him if I get a chance. But of course, I will give my best in whichever team I go”

IPL 2022 Auction: “My ultimate dream is to be the lead bowler for India across formats”, Chetan Sarkariya

Having made his international debut last year, Sarkaria is now dreaming big. Sarkariya was given a break in the senior team on tour to Sri Lanka last year. When India’s main team was grinding in Tests in England, another team was sent to Sri Lanka for a limited-overs assignment.

Rahul Dravid accompanied the squad as the stand-in coach. Sarkaria featured in three matches, 1 ODI and 2 T20s, and now dreams of playing for India for atleast 10 years. He aims to play Test cricket and of becoming the lead bowler for India. He further added:

Sarkariya’s rise has been against all odds. He represents Saurashtra in domestic cricket and his journey to this level has been filled with challenges. From fighting financial difficulties to losing his younger brother a few weeks before getting selected in the IPL, to losing his father in Covid’s second wave, Sarkariya has been through a lot at a very early age.

He picked 3 wickets on his IPL debut and had an impressive debut IPL season with 14 scalps while playing for the Rajasthan Royals last year. The IPL’s motto ‘where talent meets opportunity’ aptly personifies such brave stories.
Get more free betting tips and tricks here in our website.