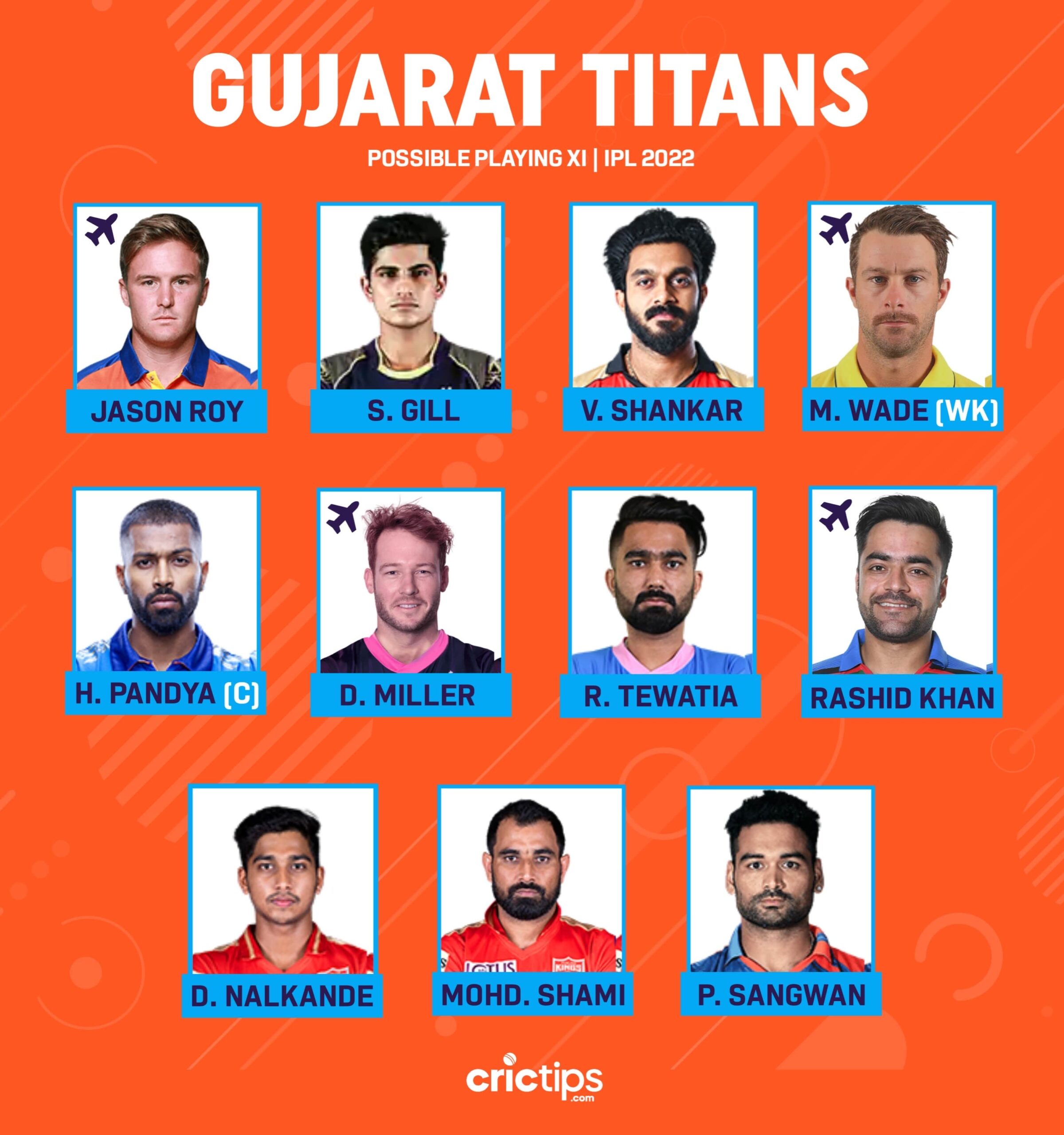 IPL 2022: IPL mega auctions are now over and just like every team, Gujarat Titans have also bought their pool of players. The Ahmedabad-based franchise had earlier bought Hardik Pandya, Rashid Khan, and Shubhman Gill as their draft picks ahead of the auction. From the remaining purse amount, Gujarat Titans bought 20 more players, including 8 overseas players, to have a total of 23 players in the squad. Here are more IPL cricket betting sites and match predictions.

Now that the franchise is done with number crunching in the auction, it will focus on finding the best possible XI for the 15th season of the Indian Premier League (IPL). Its think tank will now look to build a team that is balanced and equipped to have a successful campaign in the IPL.

England opener Jason Roy is an attacking batsman and likes to take on bowlers right from the start. He has sound technique and confident stroke play. Jason scores heavily without playing many rash shots. He has been a part of Delhi Capitals and Sunrisers Hyderabad on previous occasions and does well in the shortest format of the game.

Shubman Gill was a child prodigy. He was fast-tracked into the senior team after being the player of the tournament in India’s U-19 title win in 2018. Shubman demonstrated his maturity in India’s Test series triumph in Australia when he was entrusted to open the innings in the absence of Rohit Sharma and KL Rahul. He possesses solid technique and can make an indomitable opening pair with Jason Roy.

Vijay Shankar is a find in India’s relentless quest for a genuine fast bowling all-rounder. Though he was not good enough to meet the expectations, Shankar is good enough to make it into any team seeking a batsman who can bowl. Shankar embodies good batting technique and effortless timing. He may not be very rampant in run-scoring but can build partnerships to help pinch hitters to on it. Shankar is also a decent bowler and he was relied heavily on by the SRH in the middle overs of the game. Get the full IPL team list and match predictions.

Matthew Wade last played in the IPL in 2011. He has not been preferred by any franchise since. However, he has been a constant member of his native T20 league – BBL. Wade was once again in the reckoning after his heroic innings against Pakistan in the semi-finals. He also had an amazing outing in the recently concluded Big Bash League for the Hobart Hurricanes. Wade is an exceptional wicket-keeper and can score runs quickly.

Gujarat Titans named Hardik as their captain ahead of the auction. The Indian allrounder has risen through the ranks in all these years and is a product of the IPL. Hardik was part of the Mumbai Indians since the start of his career and was their mainstay. He is a reliable batsman and is quite able to take on bowlers. He, however, may not be very effective with his bowling. Moreover, he had sustained an injury and played purely as a batsman in the T20 World Cup. Pandya can play the role of a finisher in the team.

‘Miller the Killer’ is what he is fondly called. On his given day, Miller is nothing but carnage for bowlers. The South African holds the record for the 3rd fastest century in the IPL in 38 balls. Southpaw is a rampant run accumulator and can hit the balls hard and long. Miller is also an exceptional fielder and has immense experience of playing in the IPL. His presence in the middle order brings strength to the Titans’ batting line-up.

Rahul Tewatia shot into the limelight after his heroic innings against the Punjab Kings XI in the IPL 2020. Tewatia doesn’t have attractive strokeplay but is very effective. He runs quickly between wickets and can hit shots when required. In 2020, in a game against the Punjab Kings XI, he hit 5 sixes in an over to equal Chris Gayle the record for most sixes in an over in IPL. Tewatia bowls leg-spin and has a knack for providing much-needed breakthroughs.

Rashid Khan is probably the hottest cricket commodity in T20 leagues around the world. Rashid made his IPL debut in 2017 and has risen through the ranks since. He is highly economical and has a knack for picking wickets. Rashid was with SRH since the start of his IPL career and in 76 games he has picked 93 wickets. He has also brightened up his batting in the last couple of years and has the ability to play handy cameos at the end of the innings.

Darshan Nalkande is an all-rounder and plays for Vidharbha in domestic cricket. He is just 23 years old and promises a very bright future. He was part of the Punjab Kings Xi squad last year but didn’t get to play any games. Darshan bowls medium pace and can slog the ball if needed. His presence as a third seamer will provide depth to the batting order. The IPL could prove to be a good learning curve for Darshan Nalkande.

Mohammad Shami is a seasoned cricketer. Shami plays across formats for India and is any captain’s preferred choice. He can bowl yorkers and bouncers with precision and has proven economical in death overs. Shami presents a straight seam, an exponent of traditional bowling. Thus, inducing reverse swing in his bowling armor. Shami will surely be the leader of the Gujarat Titans’ bowling attack.

The left-arm seamer from Delhi first shot into the limelight after his momentous contribution in India’s triumph in the U-19 World Cup in 2008. Pradeep, however, couldn’t hold on to that reckoning for long and lost his consistency. Though he performed well in domestic cricket, he was not much preferred in the IPL. Pradeep is a skilled bowler and generates a good pace. He reminisces of orthodox left-arm bowlers who swing the ball into the batsman. Sangwan can very well be the deputy of Mohammad Shami this season. Check here to know the latest IPL betting apps for IOS and Andriod.