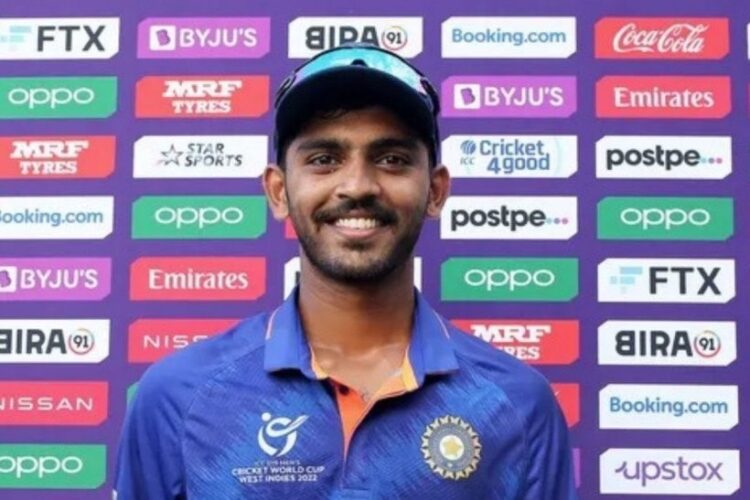 IPL 2022: Vicky Ostwal picks Ravindra Jadeja as his idol. U19 world cup hero left-arm spinner Vicky Ostwal has picked fellow left-arm veteran Ravindra Jadeja as his idol ahead of his IPL 2022 debut season. At the IPL 2022 Auction, Delhi Capitals picked him for Rs 20 lakh at his base price.  Looking for IPL Match prediction? Check out here on our site.

Vicky Ostwal said “I have always idolized Ravindra Jadeja, he is my role model. The kind of player he is, he contributes in bowling, in batting, and the most important department is fielding. He is the guy that every team wants him in,”.

Vicky Ostwal got 12 wickets in 6 matches in the U19 World Cup. And a fifer against South Africa in the opener is also included. After having a successful campaign in the U19 World Cup, he is now joining DC along with Yash Dhull. Indian Under-19 skipper Yash Dhull has also been acquired by DC for Rs 50 lakh on day 2 of the mega auction. There was a brief bidding war with Punjab Kings.

IPL 2022 : Ostwal added in a video posted on the IPL website

“I have been watching the IPL ever since I was a kid. There was always a dream of playing in the IPL, as it is the biggest platform you can get. I am really that I got picked by Delhi Capitals for this year’s IPL. And I was in my room, watching the auction and my name came very late. I knew that I did well in the T20 U-19 World Cup. But at the same time, it was a mega auction. So I thought they will go with their same side and there might be some chances. That I may not get picked. For two days, I had anxiety and it was really soothing when I got picked by DC,”

He added, “Not sure that I might get a chance or not get a chance to play, but learning will always be there. Sharing the stage with some of the great players will be huge learning for me. The moment I got picked at the auction, I got a video call from him (Yash Dhull) and he showed how happy he is about me being picked by DC“. The spinner further said that he always idolized India all-rounder star Ravindra Jadeja, as he contributes in all the aspects of the game. “I have always idolized Ravindra Jadeja, he is my role model. The kind of player he is, he contributes in bowling, in batting, and the most important department is fielding. He is the guy that every team wants him in,” said the spinner.

Check out more IPL betting sites here and get the latest update for the 2022 Match.

The Indian U19 team had a great campaign in the World Cup. They were unbeaten throughout the season. Many young talents showed their potential and as a result, we saw IPL franchises pick a few u19 guys in their squad to groom them. Ostwal and Dhull went to the DC squad. PKBS picked multi-skilled Raj Angad Bawa and CSK picked pacer Rajvardhan Hagargekar ahead of IPL 2022 season. Get the latest IPL betting apps for IOS and Android here.